Farrah Abraham is angry, and is using those Harvard “smarts” she’s been learning to trash the school…and her professor who suggested the course Farrah selected was a bit above her writing level.

The former Teen Mom OG and current Master of the Word Salad took to Yelp to rip her professor and the Harvard Extension School, after she says she was booted from a course after her professor encouraged Farrah to enroll in a lower-level class that would better suit her writing skills level. In her Yelp review, Farrah called her professor “mentally unstable” and claimed the teacher told her she had a “neurological issue.” She also deemed Harvard “educationally abusive.”

(This is typical Farrah behavior. When some of her other endeavors have gone south, Farrah has written negative reviews about whatever company/school/person she feels wronged her, oftentimes accusing them of discrimination, hating women, being abusive, etc.)

Let’s dive into this Cornucopia ‘o’ Ridiculousness, shall we?

Farrah— who had been bragging for months about taking two Masters-level writing courses at Harvard— wrote the Yelp reviews earlier this week, but it is unknown when exactly she was booted from her course. (It appears that the class in question is “Writing in the Humanities.” Farrah also enrolled in “Intermediate Screenwriting.”)

(The Ashley is going to try her best to put the events in chronological order.)

Based on an email Farrah included in her Yelp review, Farrah’s professor, Patricia Bellanca, suggested Farrah take a writing course that’s a lower level than the one she had enrolled in. It appears that Professor Pat read Farrah’s writing sample and told the Backdoor Teen Mom that she was not up to par, skills-wise, to take the class.

“My strong advice is that you drop this course now and take a lower-level writing course instead,” Professor Pat wrote to Farrah, adding that if she did this, she could still get a refund for the course. The professor also made Farrah aware that, should she choose to stay in the class anyway, she could be kicked out if she’s deemed to be “impeding the progress of the course.”

Naturally, Farrah didn’t heed Professor Pat’s warning, and— based on a screenshot provided by Farrah herself— she ended up getting locked out of the Zoom class by her professor.

It appears that Farrah tried emailing and calling anyone she thought could get her back in the class, but everyone ignored her. As we know, Farrah hates being ignored more than she hates MTV crew members using her indoor bathroom. Therefore, it’s no surprise that she ripped Professor Pat and the Dean for not returning her messages.

(Farrah served up a nice helping of her signature #FarrahSpeak Word Salad in the review. The Ashley is choosing to leave it unedited to preserve the “Farrah Speak.”)

“After attending Harvard and #1 being discriminated to the highest level by being locked out of my zoom for a course I payed for by the teacher Patricia Bellanca  and Dean Robert Neugenboren with no one answering emails, setting calls, nor the XXI, diversity, disabilities and admissions directors stepped in being cc’d from day 1 on the teachers misconduct, these are not responsible professionals these are bulling student tactics that are illegal and sexist.”

(Since The Ashley is a certified Farrah Speak translator, allow her to tell you what Farrah is trying to say: Farrah was locked out of the course, so she called the professor and the dean and then directors from the disabilities, admissions and diversity departments, whom she CC’d on emails. She is accusing them of bullying her using tactics that are illegal and sexist, according to Farrah.)

Farrah then says she had to fight to get the tuition she paid back (even though her professor warned Farrah in that email that Farrah would not be able to get a refund if she didn’t drop the course as suggested.)

It appears that the professor also suggested that Farrah may be suffering from a “neurological issue.”

“I had to dispute my tuition after the teacher claimed I had a neurological issue yet my other course I was asked to guest speak with effortless A. I would advise Harvard is not a safe nor credible school to attend. Educational abuse, deny student education, unsafe , discriminate, slander and poor mental health and writing and center help. Their own teachers do not know how to teach online!”

(Farrah Speak Translation: Basically, Farrah said this teacher said she had a mental health problem, which Farrah thinks is ridiculous given that, according to her, she got an “A” in her other course, and was even asked to guest speak because she did so well.)

In her Yelp review, Farrah then claims that Harvard used her for publicity because she’s so famous, but didn’t even want her to include their logo on her LinkedIn page. 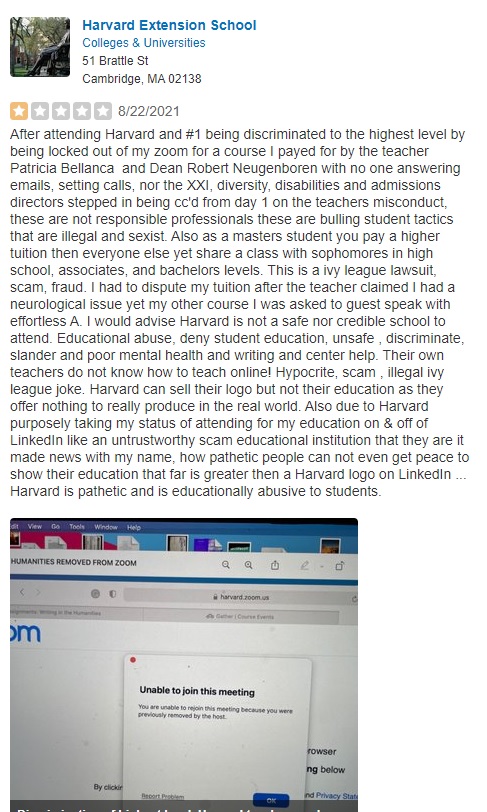 “Also due to Harvard purposely taking my status of attending for my education on & off of LinkedIn like an untrustworthy scam educational institution that they are it made news with my name,” she wrote. “How pathetic people can not even get peace to show their education that far is greater then a Harvard logo on LinkedIn … Harvard is pathetic and is educationally abusive to students.

The Ashley has reached out to Farrah’s professor, Patricia Ballanca, for comment. So far, no one from Harvard has responded to Farrah’s scathing Yelp review.

If you’d like to further fry your brain and read more examples of Farrah’s absolute decimation of the English language, click here!