The breakup of 90 Day Fiance couple Tarik Myers and Hazel Cagalitan just got a lot messier as Hazel has doubled down on the abuse allegations against her husband.

As The Ashley told you last week, Tarik revealed on social media that Hazel had left him, only for Hazel to later suggest in her Instagram bio that Tarik had been mentally and emotionally abusive.

Tarik denied Hazel’s claims and in a later-revised (and now-deleted) post, he accused Hazel of making the abuse allegations as a way to stay in the United States.

Shortly after, though, Tarik released a statement claiming he “absolutely” doesn’t want a divorce and still loves his wife. A recent GoFundMe created in Hazel’s names suggests she does not feel the same way.

The GoFundMe– which Hazel has currently linked in her Instagram bio– was created by an individual named Larry Carter who claims to be a “close friend/brother” of Hazel’s. The money raised from the online fundraiser is to be used to help Hazel find “a good therapist and a good lawyer.” 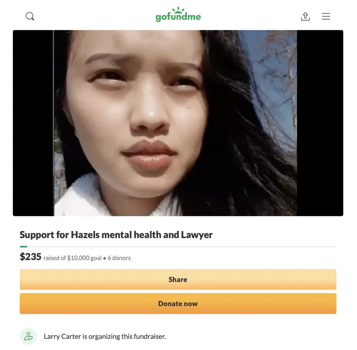 “She has left an abusive relationship with her husband and was left with nothing,” the GoFundMe description reads. “Yes she [has] her joint bank card but there’s no money on it. Now she is struggling to find the support she needs to fight for her rights and for everything she has sacrificed. She has fell into a deep depression after being mentally, emotionally, and verbally abused by her husband.

“Please help by giving what ever you are able to and sharing this page and spreading the awareness that depression is real and your mental state is very important,” the description continues. “Mental abuse has the same affect as physical abuse.”

As for Tarik, he continues to deny the abuse claims made against him and is apologizing for alleging that Hazel only made the comments in an effort to stay in the United States. He recently took to Instagram Live– a portion of which has been reposted by @90daythemelanatedway on Instagram– in attempt to make amends for his actions.

A post shared by 90 Day The Melanated Way (@90daythemelanatedway)

“Hazel is my wife, I love her I’m always going to always love her,” he said. “When she left … I went wild.”

“I probably did some stuff I shouldn’t have done, I put all kinds of stuff on Instagram, making accusations back about her like, ‘she’s just trying to stay in the country,’” he continued.

Tarik said he continues to have no way of contacting Hazel as she still has him blocked, however, he’s still wearing his wedding ring and hoping they can reconcile.