Josh Duggar sits behind bars today, after being convicted of receiving and possessing child sex abuse materials (CSAM) last week and hauled off to jail to await his sentencing. Since then The Ashley has received a lot of questions regarding what Josh’s future will look like, what his sentence may look like, whether or not any of the other members of the Duggar clan will face charges and more.

Although The Ashley considers herself to have a Doctorate in “Duggary,” she is certainly not a lawyer or legal expert, so she brought in Emily D. Baker, a licensed attorney, as well as a legal analyst and commentator, to answer some of the questions The Ashley has been asked. (Emily also runs a popular entertainment/legal YouTube channel and is the host of The Emily Show podcast.)

So, throw some tater tots into a casserole dish and grab your accountability partner and let’s get started! Here are answers to some of your Josh-Duggar-related legal questions! (Part 2 of this interview with post tomorrow!)

Q: Josh was convicted of both possessing and receiving CSAM, but is only facing the possible 20-year sentence for receiving CSAM? What happened to the ‘possessing’ charge?

A: On the day Josh was convicted, one of the attorneys who prosecuted him attempted to explain that, while Josh was charged and convicted of both possessing and receiving child p0rnography, the “possessing” is a “lesser, included charge” that is essentially absorbed into that “receiving” charge.

“[Possessing CSAM] is a lesser, included crime,” Emily told The Ashley. “What that means is that the “receiving CSAM” charge is the more-significant charge, so the [possessing charge] is a part of it already. They are two things that relate to the same behavior. The lesser one gets absorbed into the greater charge, legally.”

She also explained why it’s significant that prosecutors went with the “receiving” charge rather than the “possessing” charge.

“The receiving charges carries a five-year minimum mandatory sentence,” she said. “Possessing [CSAM] does not have a mandatory minimum and is a lesser crime.”

Should something happen to Josh’s “receiving” conviction during appeals, the prosecutors can essentially “fall back” on that “possessing” charge and sentence him for that, Emily explained. The possessing charge does not just go away.

“He was never eligible to be sentenced on both,” Emily stated. “It was always 20 years max, depending on which [charge] he was convicted of. They could not be added together [so that it’s 20 years per charge]. The top max sentence always has to be 20 years. If he had been convicted of possessing [CSAM] only, there’s no mandatory minimum sentence, so legally, a judge could have sentenced him to no prison time and only probation/parole.

“But because he was convicted of the possessing charge, there’s that five-year minimum, so he has to go to prison for at least five years and up to 20.”

Q: How much time will he actually serve? What are his chances of getting an early release?

A: Emily explained that, with federal sentences like Josh’s will be, he is almost certain to actually serve more of his sentence than if he had been convicted at the state level.

“People generally serve a higher percentage of their sentence when they’re convicted in federal court,” she stated. “In a lot of state courts, if you go into custody, you can get credit for three to four days for every day you actually serve.

“In the federal system, you do not get as much credit for time that you serve so you serve more of your sentence,” she continued. “Instead of serving, say, 50 percent [of the sentence like with state sentences] you serve 80 percent. So the sentences tend to look lower in federal court, but you’re actually serving more time.”

Although Josh has not received his sentence yet (and isn’t scheduled to for about four months), Emily predicts that he will get a sentence in the eight to 12 year range.

“He has no prior convictions, and technically this is a first offense,” Emily stated. “The judge may decide to consider that, they many not.”

Emily also pointed out that the fact that Josh “only” had 65 CSAM images on his computer may work in his favor.

“The amount of images…it’s not shockingly high for this type of case,” Emily said. “Obviously, for people in the real world, one [CSA] image is too many, but in the world of these crimes, it’s not uncommon to see thousands of images… and that’s not what happened here.

“I think eight to 12 is a reasonable range here.. the government will probably argue for 15 [years] but I don’t think they’ll get it.”

“I think that judge will send the message by not giving him just the minimum of five years,” Emily added.

Q: How many years were in the sentence offered to Josh in the plea deal he rejected?

A: The actual terms of Josh’s plea deal were never made public. However, Emily points out that there is an email in the case file from March 2021, in which Prosecutor Dustin Roberts mentions to Josh’s legal team that Josh “hit all the enhancements” and that this would likely result in the government recommending a sentence of “around 10 years.” 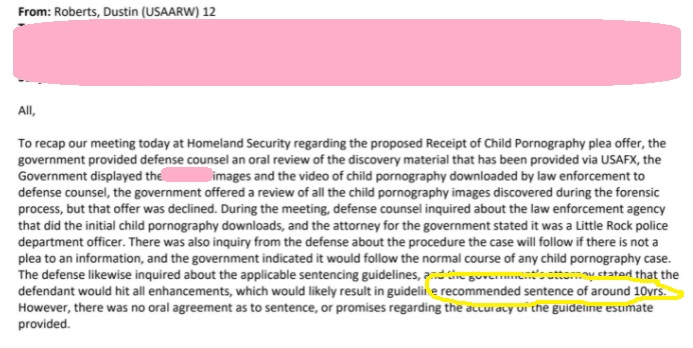 Q: Is there any chance his wife, Anna, will be charged with a crime, such as failing to keep her kids safe from Josh, etc.?

A: Anna– who attended each day of Josh’s trial— has received both criticism and sympathy over the course of Josh’s trial, with some even calling for her to be charged for continuing to support Josh.

However, according to Emily, it is highly unlikely Anna will be charged with any crime (based on everything we know right now).

“I don’t see anything [she can be charged with],” Emily said. “She didn’t download anything, and there’s nothing to indicate that [her and Josh’s] own children have been harmed.”

Emily pointed out that, had Josh’s own children been tied to the CSAM he had, his charges would have been different.

“There’s a separate code section that is involved if the images feature his own child,” she said. “If there was any indication of that they would have charged him differently and put him in prison for like 30 years.”

She stated that, while some may not agree with Anna continuing to support Josh, she did nothing wrong legally.

“That computer [with the CSAM] wasn’t in their home, there’s no indication that his children were exposed to those images. I don’t see anything on the facts we have today.”

Emily pointed out that, had Anna been connected to the CSAM that Josh downloaded and possessed, she would have been charged right alongside him at the same time.

“They would have charged her when they charged him. The Feds don’t wait!” she said.

Q: Will Josh’s parents Jim Bob and Michelle face criminal or civil charges for allowing Josh to molest his sisters and the other young girl? Can the Duggar girls sue their parents for this?

A: Jim Bob and Michelle have admitted that they were aware that Josh had molested four of his sisters when he was a teen, and that they tried to solve this issue “in-house” before it was reported to the police in 2006. (That 2006 police report was later leaked to the public by In Touch Weekly, where it was revealed that Josh’s little sisters were his victims, along with one other girl.)

According to Emily, Jim Bob and Michelle are not going to face any charges for their role in this, nor can they be sued by one of the Duggar girls who was a victim of Josh’s.

“The statue of limitations has passed,” she stated. “It’s just so gross but they can’t be charged for endangering the girls for leaving Josh in the house with them when he was also a minor. Criminally the statute has passed.”

“Civilly, the statue has also passed for the daughters to sue [Michelle and Jim Bob] for distress or anything. There’s really nothing that can come of that at this point,” Emily said. “It’s also very unusual for children to sue their parents for the trauma that they go through. It would be an extraordinary thing.

According to Emily, the statue of limitations is around three to five years in Arkansas.

“They would have to prove with documentation that they have suffered distressed,” Emily stated. “They’d have to prove that this has impacted their ability to earn a living or have a normal relationship. Proving that usually that involves therapy and medical records. It would be very invasive to put all that out publicly.”

The Ashley will be posting Part 2 of her interview with Emily tomorrow. That interview will include answers to more of your Frequently Asked Questions about Josh and his situation!