The cast of Vanderpump Rules will apparently be SURving up a lot of drama and spilling all the Pumptini-tea at the upcoming Season 9 reunion.

Bravo released a sneak peek of the two-part reunion-– set to air next week-– with Scheana Shay’s fiancé/baby daddy and ‘VPR’ newbie, Brock Davies, getting put in the hot seat for the very first time.

Going head-to-head with Brock is Lala Kent, who is seen breaking down in the trailer while discussing her ex-fiancé/baby daddy, Randall Emmett. As The Ashley previously told you, Lala and Randall split in October following allegations that Randall had been unfaithful.

In the clip, Lala reveals how much she’s struggling with what has happened, as well as the possibility of her castmates knowing that Randall was “creeping around” behind her back.

“The fact that this man, he made me feel safe enough to bring a child into this world, I feel disgusted,” she says while crying.

It’s ‘VPR’ matriarch Lisa Vanderpump who reminds Lala that Randall was still legally married to his ex-wife when he and Lala first began their relationship.

The moment that stands out the most in the Season 9 trailer, however, is the on-air breakup between James Kennedy and Raquel Leviss, which apparently none of the cast saw coming. 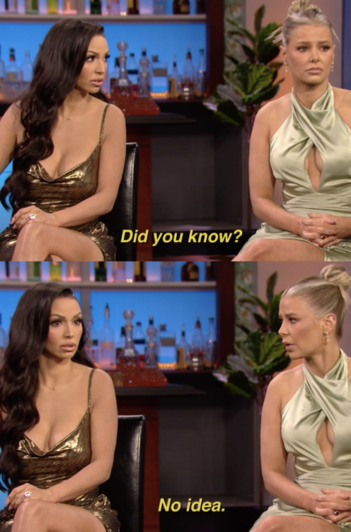 “I’ve been having nightmares about our wedding day,” Raquel confesses.

In the clip, Raquel and James not only call off their engagement, but Raquel removes her (alleged) Tiffany engagement ring to return it to James in front of the group.

Afterwards, the exes are forced to answer to Lisa, who accuses them of not being honest about their relationship throughout Season 9.

Check out the preview clip below!