On Thursday, The Ashley asked her readers to let her know which of the 10 Teen Mom girls they’d most like to see continue on with the franchise, should Teen Mom OG and Teen Mom 2 end up being combined, as The Ashley’s sources stated earlier this week.

The results are in! (The Ashley is going to keep the survey open, though, and post the updated results at a later time.)

The results, provided by Crowd Signal, use a weighted ranking system to order the girls, meaning that the position each girl was ranked by each reader has an effect on where they ultimately ended up in the list.

The Ashley can reveal that the girl who received the top rank (so the girl who fans would most like to see stay on the show) was ‘Teen Mom 2’ star Leah Messer. Her weighted rank (which, in this case, you’d want to be as low as possible) was 3.06.

Leah’s score was impressively better than even the No. 2-ranked girl, Kail Lowry, who received a score of 3.61

(Interestingly, though, Kail received the most “Number 1 position” votes; however, Leah snagged the top position because she received plenty of No. 2 and No. 3 rankings as well.)

The order after Leah and Kail is as follows: (remember, the lower the score, the better) 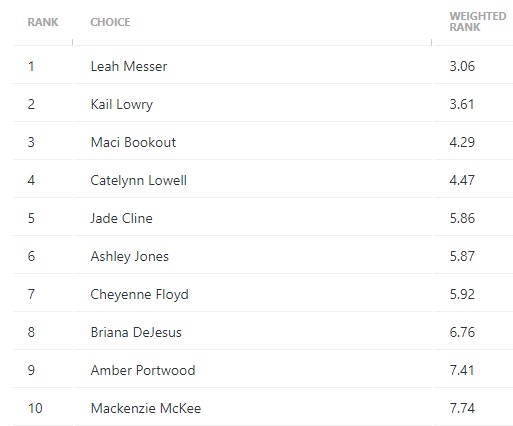 In case you missed The Ashley’s news this week, the shows’ producers have been brainstorming ways to save the ‘Teen Mom’ franchise, and have decided (although it’s not 100 percent yet, according to The Ashley’s sources) to combine ‘Teen Mom OG’ and ‘Teen Mom 2’ into one new show. With two shows becoming one, that will likely mean that some of the cast members will be getting the boot.

“This is like their last-ditch effort to keep the shows going,” one source told The Ashley, mentioning the plummeting ratings of both ‘Teen Mom OG’ and ‘Teen Mom 2’ in recent years.

The Ashley will continue to provide updates as she gets more info on this situation.

RELATED STORY: EXCLUSIVE! ‘Teen Mom OG’ & ‘Teen Mom 2’ Are Likely Going to Be Combined Into One Show; Some Cast to Be Let Go