Another Teen Mom star is behind bars— and this time, it’s for attempted murder!

Drew Brooks— who is the baby daddy of Teen Mom: Young & Pregnant star Rachel Beaver— was arrested Wednesday by the Monroe County, Tennessee, Sherriff’s Department. In Touch Weekly broke the news of Drew’s arrest, and The Sun stated that 22-year-old Drew was charged with attempted homicide after he allegedly stabbed another man “in the lower left stomach area” during an altercation.

The Sun also stated that the stabbing took place on a dirt road, and that the victim was airlifted to a local hospital. Drew— who is the father of Rachel’s daughter Hazelee– is currently being held behind bars until his next court date on April 18.

The Ashley wanted to get the details of the Sweetwater Stab-a-Polooza, so she spoke to a local who is familiar with both Drew and the victim (whom The Ashley has chosen not to name).

According to the source, Drew and the victim are (well…were) friends, and they had been hanging out before the fight. Things got heated when Drew was asked to go pick up something for the victim and his wife. After Drew returned, the victim felt Drew was ripping him off.

“Drew left his phone and wallet at the [victim’s] house, and when he returned to get it the next day, [the victim] accused Drew of shorting him and wouldn’t give Drew back his stuff until he gave him more money, which Drew didn’t have,” the source said. “That’s when they started to fight.”

The source said that, during the fight, Drew allegedly pulled out his knife and allegedly stabbed the victim in the stomach. Drew stated that he acted in self defense because he was allegedly getting beat up, the source says.

According to the Probable Cause Affidavit, which was obtained by The Ashley, there were two witnesses to the alleged stabbing, both of whom gave “similar accounts to what had occurred.” 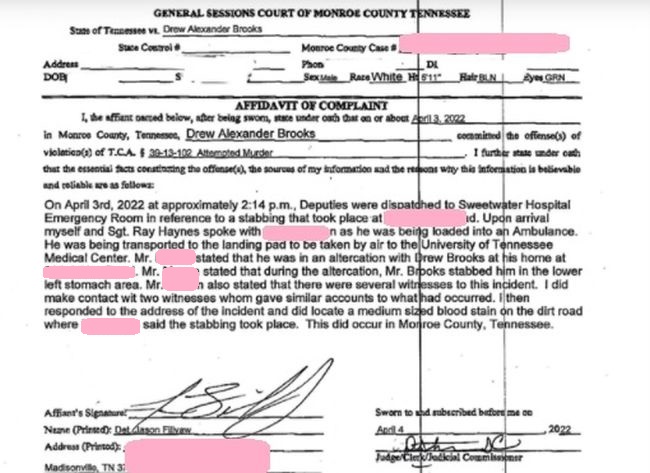 The Sun reports that a “medium-sized blood stain” was found on a nearby dirt road where the stabbing allegedly took place. The victim was taken to a small local hospital initially, and deputies later spoke to him as he was being put into an ambulance. The victim was later airlifted to a bigger hospital.

Drew turned himself in and is now being held without bail at the Monroe County Jail awaiting his next court date, which is April 18.

Drew has appeared infrequently on ‘Young and Pregnant’ over the years. He has a long history with the law, with several arrests on charges including property theft, probation violation, and unlawful carrying or possession of a weapon.

In April 2020, he was arrested after being found in a car with alcohol and marijuana (as well as two people under the age of 18). During that arrest, he allegedly gave police the wrong age and name. Drew pleaded guilty in that matter to criminal impersonation and contributing to the delinquency of a minor. He was released from jail in July 2020.

Rachel has yet to speak publicly about her ex’s arrest. However, she has stated in the past that Drew does not have contact with their daughter Hazelee.

The Ashley will update this story when more info is available. Stay tuned!