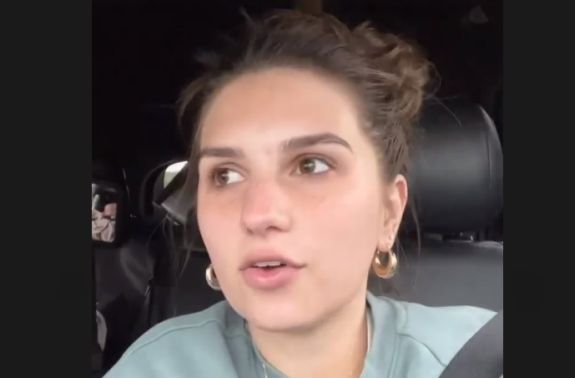 Carlin Bates Stewart has been released from the hospital following what her husband Evan Stewart calls “a really bad episode” of seizure-like symptoms and fainting.

The Bringing Up Bates star posted a video to Instagram on Monday after her release from the Vanderbilt University Medical Center, where doctors had been trying to figure out what was causing Carlin’s ailments.

“It’s been a couple days. We have been in the hospital, running a lot of tests. I got discharged a little bit ago,” Carlin said. “Physically, I’m doing fine right now. Mentally, I’m struggling a little bit, because the past few weeks have really been trying to me.”

As The Ashley previously reported, Carlin had been experiencing the seizure-like episodes and fainting spells since the beginning of May, resulting in her going to the emergency room several times.

In a video posted to the couple’s YouTube channel, Evan explained that he and Carlin had been visiting family in Nashville last week when Carlin passed out in a restaurant, and then again soon after. (She had passed out once before at her boutique, too.)

“This time she’s still out of it,” Evan said in footage shot right after Carlin’s second fainting spell. “She’s laying on the bed acting out of it. It’s just starting to freak me out. I don’t know what to do. I’m worried.”

The video then shows footage from later that same night, with Evan and Carlin going to the emergency room again.

“It’s been a very bad day for Carlin,” Evan says. “She’s passed out like three different times, two of which she completely fell.”

Evan stated that the doctors ruled out anything having to do with her blood/hemoglobin levels, and that the symptoms are not the result of anemia. Her MRI showed that there is no brain aneurysm or anything remarkable.

Two days later, though, while at a baseball game, Carlin passed out and fell, hitting her head. The episode was deemed so serious that Carlin had to be rushed to the hospital in Nashville via ambulance. (Evan posted a photo of Carlin on a gurney, wearing a neck brace after her fall.) 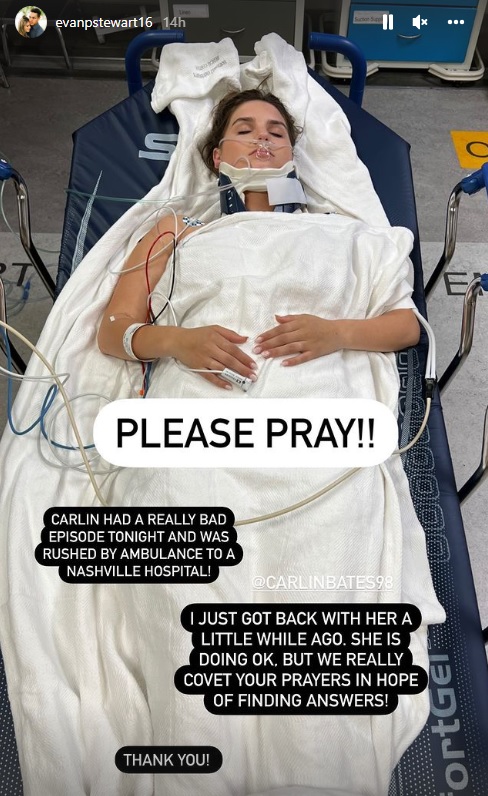 “They got her in[to the hospital] and obviously they took her straight to trauma,” Evan said. “We were all really worried about her hurting her head when she fell.”

(Carlin stated that she doesn’t remember much about falling and hitting her head, but said that right before she passed out her hands, arms and face went numb, and then her whole body began to shake while in the ambulance.)

Later in the Instagram Stories video, Evan said that Carlin underwent “all kinds of tests,” including an MRI and a CT scan but the doctors still don’t know what’s causing Carlin’s symptoms.

“The bad thing is they still haven’t been able to pinpoint it. They said it’s seizure-like symptoms, but none of the tests showed what it could be,” he said. “It could be epileptic, it could be non-epileptic. They said it could be due to cardiac, which we had her heart monitor on all week. We still have to send that in and find out the news from that.”

Carlin goes on to say that Evan will be applying for Family Medical Leave from his job, due to the fact that she needs someone with her 24 hours a day, and she can’t drive.

“I tell Evan every time I think maybe it’s just a fluke thing and it’s not going to happen again, then it happens again,” Carlin said. “There’s got to be something that’s triggering it. But we’re just not sure what…maybe with all the prayers it will go away on its own?…We will have to live with no answers for a little bit.”

You can watch Carlin and Evan’s YouTube video below.