Nearly a month after suffering a stroke, Little Women: Atlanta star Shirlene King Pearson, better known as ‘Ms Juicy Baby,’ is home from the hospital. She took to Instagram Friday to record a two-part video letting fans know how she’s doing and thank them for their support.

“Hey guys, it’s Ms Juicy, I just wanted to let you guys know that I am back. I’m not at 100% but I am still healing, but this is a video to let all my fans, all my supporters, to let you guys know that I have been released from the hospital. I am at home,” she said in the first part of the video. “As some of you already know, on April the 28th, I suffered a stroke, and the type of stroke I had was, it entailed a brain bleed, and for people that don’t understand what all a brain bleed entails, that’s when bleeding on the brain happens, and that can cause memory loss, it can cause different things for different people.”

Ms Juicy shared with her 674,000 followers that when she went to the hospital following her stroke, supporters started calling and even showing up at the hospital to see how she was, leading her care team to send the reality star and radio personality to another facility for medical treatment.

“On April the 28th when I suffered a stroke, 911 was called. I was rushed to the hospital, for everybody that don’t know, the first hospital I was rushed to, as I’ve always told y’all, everybody wants some of the Juice. It was so many people calling the hospital, showing up at the hospital, before I even knew I was there, they had to care flight me to another hospital,” she said.

Later on in the first video, she addressed some fans who may have been upset that they weren’t able to visit her or send flowers while she was receiving treatment in the ICU.

In the videos, Ms Juicy talked about the affects of the stroke and the rehabilitation work she’s done.

Ms Juicy shared in the videos that her mom and sister have been helping take care of her since the stroke. Her sister, Tanya Evans, set up a GoFundMe to raise money to cover Ms Juicy’s bills and living expenses while she recovers. In the second part of the video, Ms Juicy addressed rumors the fundraiser wasn’t legit. 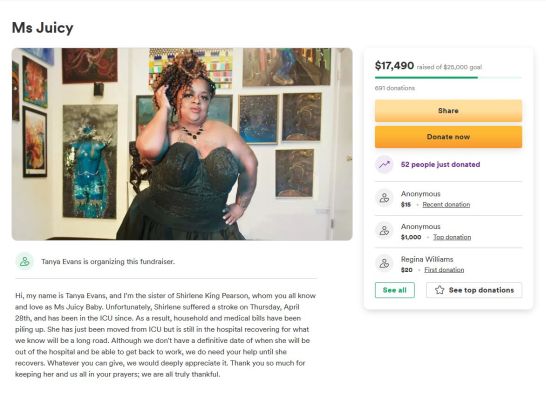 “I know there’s a lot of scammers out there, I’ve seen them, but I appreciate you guys being concerned, but this one right here, there is a link in my bio, that’s from my real family and my real team, yes, I am aware,” she said. “So you will know, I haven’t been able to work so there’s no money coming in. I’ve been down for over a month in the hospital, as y’all can see, I can’t even really say, I’m a try it, but I can’t even really say ‘Ms Juicy, Baby’ the way I usually say.

“I’m not at 100% right now, but I’m coming back, but I want you to know this particular GoFundMe is not a fake at all… I approved it. I still have a mortgage, I still have a life that has to be lived, I still have bills that need to be paid,” she said.

Throughout both videos, she thanked supporters for their calls, texts, messages, prayers and more, and assured them she’s on the road to recovery.

“Yes, I did suffer a stroke. As you can see, I’m not dead, I’m right here. It might have slowed me down, but I’m here and I’ll be back at 100% when the time is right. But I can’t push it and I can’t rush it. I love you guys and, again, this came from me, and we’ll talk on another level…This right here, this is not me, I can’t stay this way too long, y’all, so keep praying, we’ll be back real soon. Love you and thank you, and, again, thank you for all the support,” she said in the second part of the video.

If you would like to support Ms Juicy in her recovery, check out the GoFundMe started by her sister. At press time, nearly $17,500 had been raised toward the $25,000 goal.

Visit the Centers for Disease Control and Prevention (CDC) website to learn more about the signs of stroke and how to help someone if you suspect they are having a stroke.