Exclusives, Teen Mom, Teen Mom 2, Teen Mom: The Next Chapter
2 months ago by The Ashley
15

Cheyenne Floyd and Zach Davis tied the knot on Thursday night in Pasadena, California, in an elaborate, MTV reality star-filled bash held at the swanky Langham Hotel. As The Ashley previously reported, the Teen Mom stars’ ceremony included a live choir, a troupe of African dancers, a band, and an aisle that was made to look like it was glass. (Click here to see The Ashley’s exclusive photos from the ceremony.)

After Chey and Zach said “I do” under the stars, their guests retreated to a large ballroom inside the hotel, where they ate, drank and danced into the night.

Guests: As The Ashley previously reported, many of Cheyenne’s ‘Teen Mom’ co-stars made the trip to California to attend the wedding, including Tyler Baltierra, Catelynn Lowell, Jade Cline, Sean Austin, Kiaya Elliott, Maci Bookout, Taylor McKinney, Gary Shirley, Leah Messer and Jaylan Mobley. An entire crew of producers and security was also present for the wedding, as the event was filmed for the show. (The Challenge stars Devon Walker and Nelson Thomas were also present for the festivities!)

Absent from the night were Chey’s other ‘Teen Mom: The Next Chapter’ cast mates Briana DeJesus (who was invited by was not able to make it due to Hurricane Ian); Amber Portwood; and Ashley Jones.

Food:  Dinner was served around 8 p.m., and guests feasted on hot appetizers like sea scallops and butternut squash puree. For the main course, guests chose between ravioli, sea bass or filet minion.

Cake: Cheyenne and Zach’s cake was among the most-elaborate things at the wedding. The black cake featured a tower of tiers with different textures, and appeared to be “floating” off of the table (thanks to a nifty clear glass stand). The cake sat in front of a wall of candles and flowers. 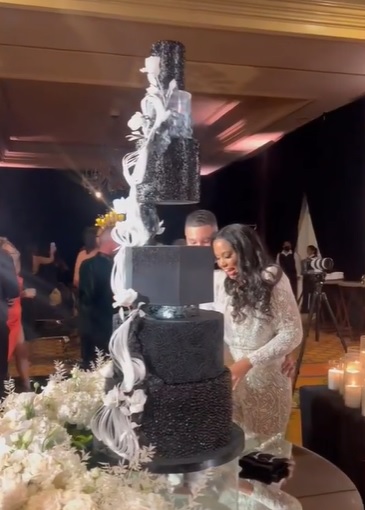 Dancing: The dance floor for the reception was shiny and black, with the couple’s initials spelled out in white across it. During the reception, Cheyenne changed into a white lace (see-through) jumpsuit so she could dance.

At one point, Zach and Cheyenne brought out their son Ace, as well as Cheyenne’s daughter Ryder and her nephew Baz and they did a “family first dance” together. 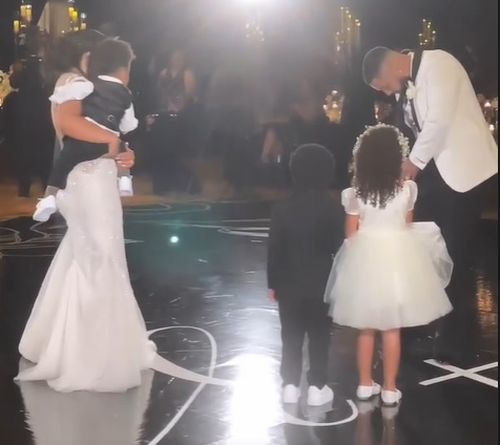 Check out the full gallery of reception photos below!