The Chrisley Family drama has been happening on Twitter for years— but apparently, no one paid much attention to it!

Last week, Chrisley Knows Best patriarch Todd Chrisley said in a statement that his estranged daughter Lindsie Chrisley had affairs with two different men from The Bachelor franchise. The statement was released after TMZ broke a story stating that Lindsie filed a police report last month claiming her dad and brother Chase “wanted her to lie about an incident and if she refused to do so, they were going to release the sex tape involving her.”

Lindsie claimed in a statement released last week that she has been “a constant target of lies, harassment and threats” from her family.

Todd has denied that he trying to extort Lindsie (and that Chase purchased the sex tape, which allegedly features Lindsie getting it on with Robby Hayes). However, a look at his old tweets seem to show that Todd & Co. have been vaguely threatening to spill the beans about Lindsie’s (alleged) sex tape and affairs for years!

The tweets, which are all still live and posted to Twitter as of press time, do not mention Lindsie specifically. However, the details mentioned in them are strikingly similar to the details of the story of the sex tape and ‘Bachelor’ affairs.

In June 2017 (the same month Lindsie reportedly left ‘Chrisley Knows Best’), Lindsie’s sister Savannah posted a tweet that seemed to be hinting that someone was having an affair. Todd responded to that tweet with hashtags that many could assume are referring to “two-Bachelors” Lindsie.

“Soo funny! Come after me…I really don’t care…come after my mama…you’re OVER!!” Savannah wrote on June 29, 2017. “Watch what u tell when your bed isn’t clean…#literally.”

“Especially since there’s been more men in your bed than your husband has spent time there, #2batchelors #inlaws #vidoes #photos #letsdothis,” Todd responded. 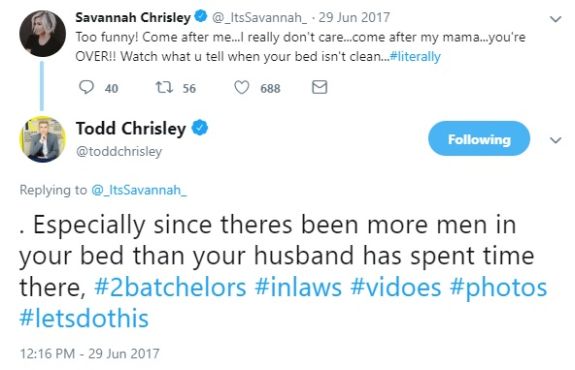 A few months later, Todd was again tweeting about someone who “cheated twice.” 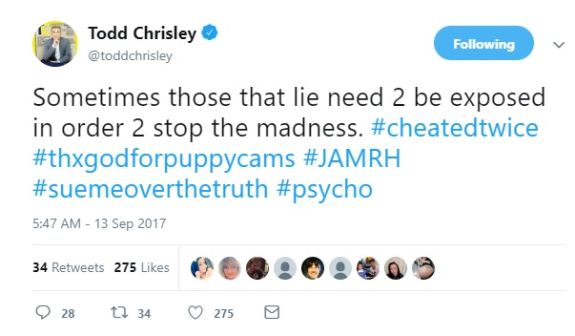 (While Todd didn’t reveal what his #JAMRH hashtag stands for, those letters are coincidentally also the initials of Lindsie’s then-unknown alleged sexy-time partners, Josh Allen Murray and Robby Hayes.)

In another tweet posted that same month, Todd promised that “it’s coming out” but did not reveal what “it” was specifically.

“Like mother like daughter, once a cheater always a cheater, once a liar always a liar. #truthmaycostyouyourchild #itscomingout #glovesoff,” he wrote.

(Some of Todd’s followers guessed that this tweet was about Lindsie and her biological mother, but Todd did not confirm or deny that it was.) 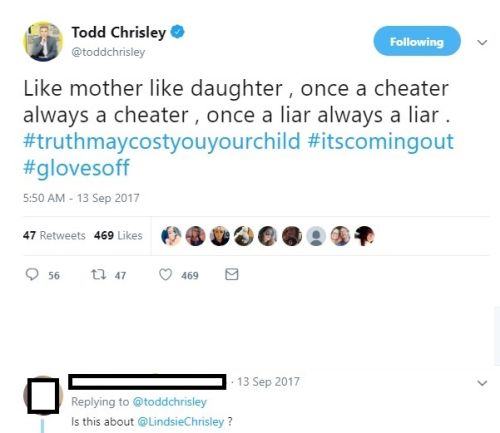 Both Todd and Lindsie have been very vocal in the midst of their feud. On Tuesday, Lindsie told TMZ that she has hired an armed security guard out of fear. Later that day, Todd told People that, despite everything, he still loves his daughter.

“As I’ve said before, it’s heartbreaking that Lindsie feels the need to air her private issues in public. But whatever she says, she is still my daughter and Chase and Savannah’s sister,” Todd told the magazine. “We have always loved her, we will always love her, and we are here for her.”

Lindsie’s brothers have blamed Lindsie for the recent arrests of Todd and Julie, claiming that she helped turn Todd and Julie in to the feds. (Both Todd and Julie were indicted on 12 tax evasion and bank fraud charges last week.) Lindsie has denied that she had any part in it.

The Chrisleys insist that they are innocent of the crimes they’re accused of.