After announcing in June that his reality TV days were behind him, Chris “Swaggy C” Williams went on to back those statements this week when he revealed he would’ve turned down a spot in the Big Brother: All-Stars house.

The 25-year-old made his reality TV debut on Big Brother 20 in 2018 where he met his wife, Bayleigh Dayton. The couple appeared on MTV’s The Challenge: Total Madness this year, which, according to Swaggy, was his final reality TV role. (Bayleigh is currently appearing on ‘Big Brother: All-Stars’.)

Literally I’m engaged .. to my fav person in the world 💍💭 And I couldn’t be happier. Thank you everyone for the love. I love you Bayleigh Amethyst 😘 @meierotto hooked us up BIG TIME! 💫 #Swayleigh

Swaggy opened up about his decision to leave reality TV to focus on his career as a day trader during an episode of Taylor Nolan’s Let’s Talk About It podcast.

“I actually quit reality TV about two months ago so you’ll never see me on another game show, you won’t see me on ‘The Challenge’ again – like, l don’t want to do it no more,” Swaggy said in Us Weekly’s sneak peek of the podcast episode. “When ‘Big Brother’ called for ‘All-Stars,’ luckily they called [Bayleigh] because if they called for me I would’ve said no.”

Still, Swaggy said ‘Big Brother: All-Stars’ is a great opportunity, one which Bayleigh couldn’t turn down.

“That was the only motivation and on top of that, she wants to be the first Black female winner of ‘Big Brother,’” he explained. “Let’s take away Celebrity [Big Brother] with Tamar [Braxton] – shout out to her – but, like, actually in the 22 seasons [of the regular American ‘Big Brother’ show], she wants to be the first. So it’s not really a money thing that we’re going for, it’s more so representation and if she doesn’t get that, then it is what it is. As long as Da’Vonne [Rogers] or somebody, you know what I mean, wins, it’s time.”

Last month, Swaggy posted a lengthy YouTube video, “Why I Left Reality TV to be A Full-Time Trader,” during which he said his decision to quit reality TV was not about the networks or producers, but rather the environment itself. 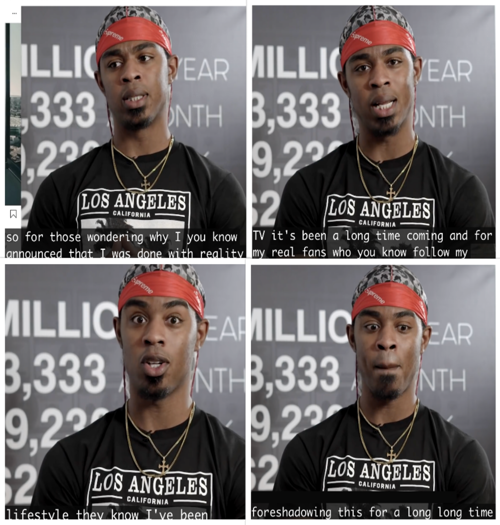 “The people on the other hand are just too toxic for me,” he said. “I don’t want to be in that environment. I’m a multi-millionaire. I don’t need reality TV. People go on reality TV to get their first $500,000 or get their first million or get exposure. Some actually do it for the competition and the love of the game. I don’t love the game. I’ve never watched ‘The Challenge’ before I got on … I don’t know who these people are.”

Swaggy went on to compare his experience on the two shows, calling the backstabbing he received on ‘Big Brother’ from Tyler Crispen, “pure gameplay, nothing personal” to the disrespect he received on ‘The Challenge,’ which he said was “the last straw.”

US Weekly published an article about me from The Challenge Mania podcast that I did, stating that I won’t be doing BB22 or The Challenge 36. That is absolutely correct 🙏🏾⁣ ⁣ I don’t have time for this reality TV lifestyle anymore. It does NOT mean I’m better than anybody… I just know EXACTLY what I want in my life before I turn 30 and my energy can’t be wasted on negativity and drama. I’m only 25. 4 months in. I’m young as HELL. Very very young. Don’t get me wrong, being on reality TV is a FUN thing…… but a thing I feel like I’ve outgrown. ⁣ Been a good ride w/ Swaggy C buuuuut… I’m getting off. I’ma take my money, move my ass to Beverly Hills ⛱ & run it all the way up.⁣ I got a lot of ideas in my head and it’s time for me to execute them. Starting with Secure The $wag.⁣ ⁣ The producers & networks (CBS & MTV) are all amazing. TV easily jumpstarted me to where I am today, and I’m forever thankful to the networks. But the fans and the people on these shows be doing too much. WAY too much. And it gets to a point where it’s like… I don’t need this? ⁣All this negativity and drama? All for what? 😤⁣ ⁣ I think I’m smart enough to understand the turning point. The stress & drama y’all be bringing … literally serves me no purpose. Especially when I’m fucking rich. Rich enough to protect my energy…. and say peace out.⁣ ⁣ Love y’all,⁣ Swaggy 💜

“ … I get on ‘The Challenge’ and people are throwing low blows and personal shots and Josh [Martinez] threw a drink at me knowing I don’t drink alcohol,” he explained. “That was the last straw for me, where people will really disrespect you for no reason.”

Swaggy said he doesn’t have a problem with any of his former cast members, he just wants to live his life “without worrying about the drama.” He said he also didn’t “have time for the negativity” and that reality TV was never “the goal.”