Jed Duggar has reportedly made a costly mistake in his campaign to become the next Arkansas State Representative for District 89.

The donations, onARwatch reports, were made to Jed at three separate times, with one being made by Julie Little, who happens to share the same home address (and last name) as the retired banker.

Jed’s financial disclosures, which are available to the public, stated that the first donation from the Littles was made in the amount of $2,800 on August 30. The second donation, also for $2,800, was reportedly made September 9, at which point the cumulative total from Ross Little was listed to be $5,600. Jed’s financial disclosures for the month of September were amended within the past week, changing Ross Little’s cumulative total from $5,600 to $2,800.

Despite the amendments to Jed’s financial disclosures, the top donors for Jed’s campaign list two $2,8000 donations from Ross Little and one $2,800 donation from Julie Little, totaling $8,400.

While no ethics complaints have been filed against Jed regarding illegal campaign donations, the state of Arkansas does penalize candidates for violations of this sort. In 2019, the state legislature increased the Arkansas Ethics Commission’s maximum fine from $2,000 to $3,500 per violation, which means Jed could potentially be hit with a $7,000 fine for this incident.

Candidates may use campaign donations to pay fines associated with their campaign; however, they must report the fines as a campaign expenditure on their next Contribution and Expenditure report.

Coincidentally, some of the residents in Jed’s district are claiming the 21-year-old has been dropping some major coin on campaign signs. An individual on Reddit shared a photo of Jed’s mug and “pro-life candidate” slogan plastered onto the side of a truck recently, asking where the twin-bed dweller was “getting all his money.” 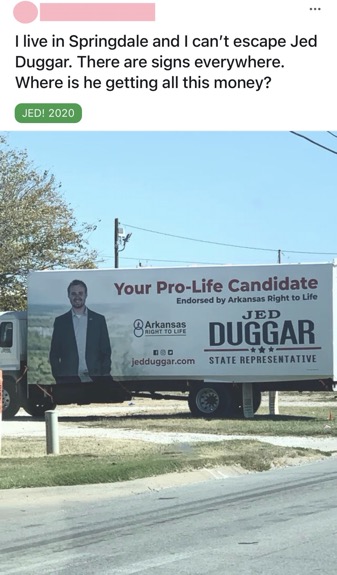 As The Ashley told you in November, Jed is running against incumbent Rep. Megan Godfrey (D) – an educator advocating “for families, for fairness and for the future of [Arkansas].”

An article from the local newspaper— which was recently shared by the Duggar Family News: Life is Not All Pickles & Hairspray Facebook page— shows how Jed stacks up against Megan in terms of her education, political experience and residency.

RELATED STORY: Amy Duggar Blasts Fan Who Tells Her to “Pick Up the Pace” & Have More Babies Like Her Cousins: “A Woman’s Body is Not a Factory!”