Counting On star Justin Duggar, the 14th  child of Jim Bob and Michelle, announced his engagement to Claire Spivey on Monday, a whole 24 hours after celebrating his 18th birthday.

“We’re so excited,” Justin said in a video posted by TLC. “I just proposed to Claire and she said yes.”

“When I saw him get down on one knee and kind of dig in his pocket, I was like, I can’t believe it,” Claire added. “I’ve waited for this moment, but actually seeing it happen, it was pretty surprising.”

Claire may have been surprised, but many ‘Counting On’ fans were not. On social media, many fans suspected that the Duggars may have been waiting for Justin to turn 18 (which he did on November 15) to announce the engagement, which most likely took place when Justin was still 17.

Justin, who revealed that he was courting Claire last season on ‘Counting On,’ said in the video for TLC that he’d been talking with Claire’s parents “for quite a while” and that he got their blessing before putting a ring on it – as if he had a choice. Claire mentions in the video that fans will see more of the couple’s journey on ‘Counting On,’ so brace yourselves for another Duggar wedding special in the not-so-distant future.

Justin and Claire told TLC – together, of course – that they cannot wait to married and are “looking forward to a life together of faith in Christ, love for one another and happiness.”

The news of Justin and Claire’s engagement was met some congratulations from a few  Duggars, including Joy Forsyth and Jill Dillard, two of Justin’s nine sisters.

“Congrats to my bro, [Justin] & his now fiancé, [Claire],” Joy posted to her Instagram Story. “Love you guys and we’re SO excited for you!!”

“Congrats bro,” Jill commented on Justin’s post. “Being married to your best friend [is] the best!!!”

Both Justin and Claire shared their engagement news on their respective social media pages, with Claire seemingly revealing that the pair had been in a courtship for much longer than fans were led to believe.

“After 14 months of courting, I am thrilled beyond words to be engaged to [Justin Duggar],” she wrote. “So looking forward to see what the Lord holds for us during this next chapter of life. Thank you everyone for your support and enthusiasm!!”

She proudly showed off her new engagement ring on social media as well.

Assuming Claire was only courted by Justin during that time, this means the couple actually entered into a courtship when Justin was still 16.

Claire’s mom, Hilary Spivey, previously defended the Duggars after fans accused Jim Bob of arranging his kids’ marriages, as well as Justin and Claire’s courtship. At the time, Hilary argued that the Duggar kids were capable of handling “lots of responsibility at a young age, unlike most in society today.” 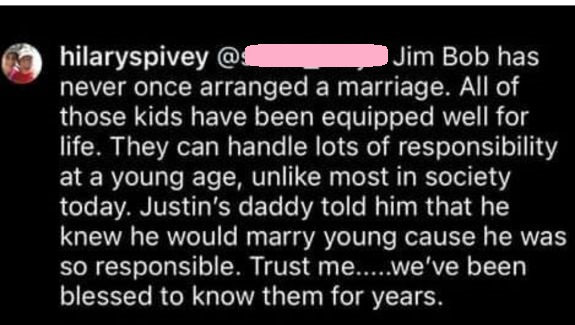 “Justin’s daddy told him that he knew he would marry young cause he was so responsible,” she added.