Jed Duggar may have been “counting on” a win on Tuesday night, but the people of Arkansas apparently had different plans.

The Counting On star was defeated in his bid to become the Arkansas State Representative for District 89 in Springdale. Jed– the 10th child of Jim Bob and Michelle Duggar— was defeated by Megan Godfrey, who was running for a second term.

Before the election, several media outlets compared Jed and Megan’s stats, causing many voters to comment that Jed— who is only 21 years old, has no political experience and only a high school diploma from Duggar Homeschool High— paled in comparison to Megan, who has been a teacher in Springdale and is currently pursing her doctorate.

Still, Jed was able to get a respectable number of votes. According to NWA Online, the final yet unofficial results show that Jed got 44 percent of the votes, while Megan secured 56 percent.

“The district has historically had one of the lowest turnouts of any in the region. Tuesday was no exception,” the newspaper reported.

Last month, Jed’s campaign stirred up some controversy when it was reported that he allegedly accepted $8,400 from a single donor – a retired banker named Ross Little who resides in Louisiana. That amount far exceeded the state’s maximum donation of $2,400 from a single donor, putting Jed at risk of having to pay some hefty fines.

In his concession statement posted on social media, Jed thanked his election team and promised to pray for Megan, whom he previously labeled “radical” and a “liberal princess” in his campaign material.

“I am grateful to everyone who supported my campaign in Springdale and to all who came out to vote for conservative values. While I am disappointed that we came up short, I am grateful for the opportunity to listen and learn from so many amazing people that make Northwest Arkansas one of the best places to live in the USA,” Jed wrote.

“I called to congratulate Representative Megan Godfrey on her win last night, and I thanked her for keeping the campaign focused on the issues and for being courteous throughout this campaign. I will be praying for her and I wish her and her family nothing but the best as she embarks on serving another term representing District 89 in Little Rock.”

After news of Jed’s loss hit the Interwebs, it was a much-discussed topic on Twitter, with some even calling him “Twin Bed Jed,” due to the fact that he was shown on ‘Counting On’ sleeping in a twin bed next to his brother, Jeremiah, after having recently moved out of the Duggar Family home.

“Arkansas may not be the sharpest crayon in the US Box, but at least they had enough sense not to elect a pompous child who can’t go anywhere without a chaperone,” one person tweeted. “#JedDuggar can’t play with the adults. Even daddy’s $ & ‘fame’ couldn’t save him. #DuggarArroganceLosesAgain.”

“If you need a little good news, just know that Jed Duggar (a 21-year-old who’s not allowed to go on a date without a chaperone) lost his race for the Arkansas State House to democratic incumbent Megan Godfrey!” someone else tweeted. 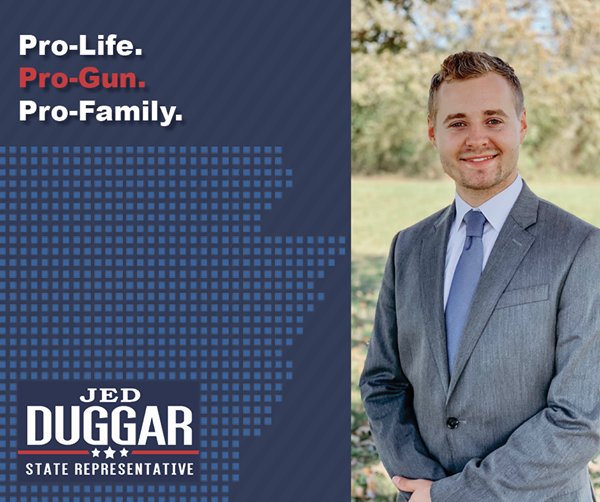 The Duggar Family has yet to make a statement on Jed’s loss.