For those who thought the end of 2020 also meant the end of the long-running drama between Ronnie Ortiz-Magro and Jen Harley, we have bad news for you.

After Ronnie debuted his new relationship in October, the exes seemingly maintained the peace and it looked like things were actually heading in the right direction instead of the usual direction Ronnie and Jen veer towards: head first into a massive feud.

However, the truce between Jen and Ronnie appears to have been short-lived, as Jen made it very clear on social media this week that she has a huge problem with the new girl in Ronnie’s life, Saffire Matos.

Jen took to Instagram (where else?), accusing fake accounts – linked to Saffire, according to Jen – of firing off DMs to her boyfriend, Joe. She also took issue with Saffire posting photos with Ariana, the daughter Jen shares with Ronnie.

“Who the F does she think she is telling my man if he can see my daughter or not,” Jen wrote. “This chick has been around 3 months trying to dictate who the F my daughter sees?? You got me f up!”

When a follower (understandably) requested some clarification on what the hell was going on, Jen confirmed that she and Joe are being harassed by Ronnie’s girlfriend. 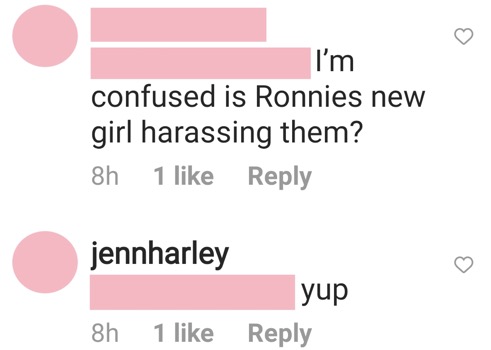 In response to another follower who noted “something about Ron’s new girl doesn’t sit right,” Jen agreed and claimed to have proof that Saffire is just using Ronnie for his money and fame. 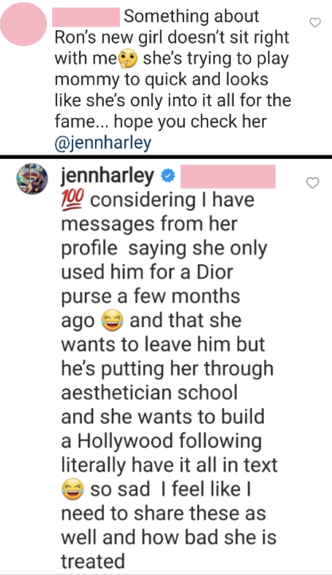 “ … I have messages from her profile saying she only used him for a Dior purse a few months ago and that she wants to leave him but he’s putting her through aesthetician school and she wants to build a Hollywood following,” Jen wrote. “Literally have it all in a text. So sad I feel like I need to share these as well and how bad she is treated.”

Saffire attempted to shut down Jen’s claims and in turn, allege that she is the one being harassed. According to her post, she did not talk about the issue previously because she didn’t want negative attention, “especially by a person who is clearly not happy.” 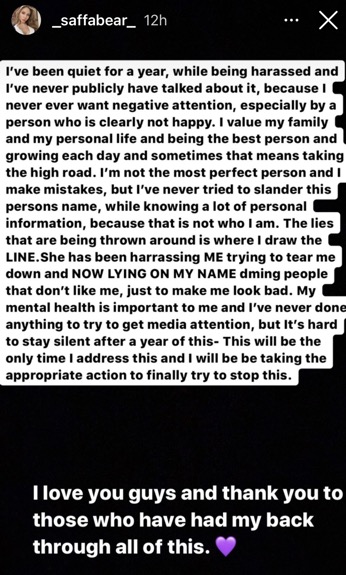 “I’m not the most perfect person and I make mistakes, but I’ve never tried to slander this person’s name, while knowing a lot of personal information, because that’s not who I am,” she wrote. “The lies that are being thrown around is where I draw the LINE.

“She has been harassing ME trying to tear me down and NOW LYING ON MY NAME dming people that don’t like me, just to make me look bad,” Saffire continued. “My mental health is important to me and I’ve never done anything to try to get media attention, but it’s hard to stay silent after a year of this- This will be the only time I address this and I will be taking the appropriate action to finally try to stop this.”

In response to the claims, Jen called Saffire a nobody, demanded receipts, denied any harassment on her part and… accused Saffire of biting Ariana? 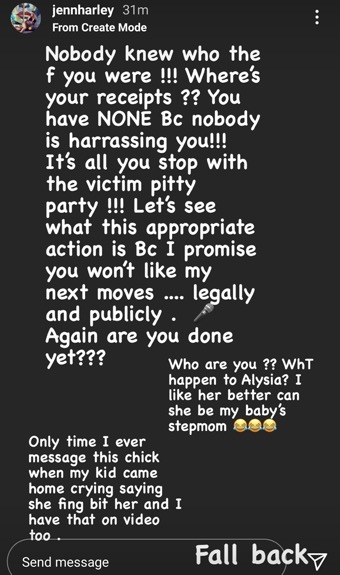 “ … stop with the victim pity party,” she wrote. “Let’s see what this appropriate action is Bc I promise you won’t like my next moves …. Legally and publicly. Again are you done yet???

“Only time I ever message this chick when my kid came home crying saying she fing bit her and I have that on video too,” Jen added.

Saffire did go on to provide “receipts,” which included a screenshot of an alleged text conversation between Ronnie’s mom and Jen, in which Jen admits to messaging “her” – presumably Saffire – after finding out Saffire was “laying next to my kid.” 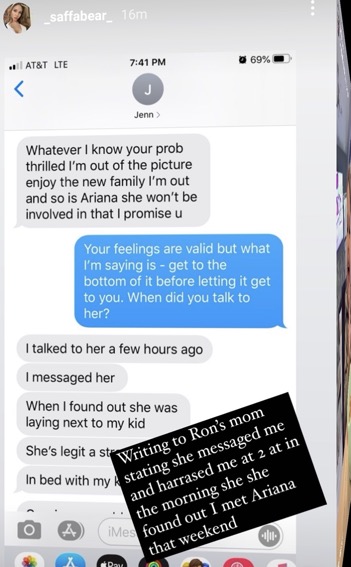 Jen admitted the allegations she’s made against Ronnie and his new girlfriend have resulted in some hateful comments from Jersey Shore fans, or as she called them, “trash people.” 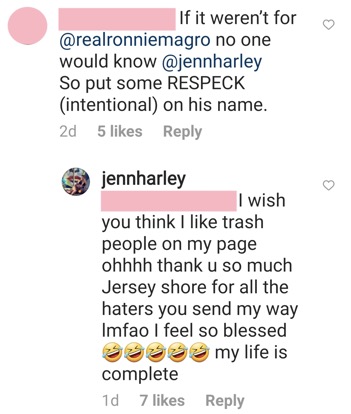 While Ronnie has remained quiet on the hot mess happening between his former and current soulmates, we’re sure it’s only a matter of time before he fist pumps his way into the conversation.