Madison LeCroy is clearly one of her own biggest fans.

The Southern Charm star was called out for an embarrassing social media snafu last week after showing herself some love on Instagram and failing to switch to her alternative account before doing so, Reality Tea reports.

Madison’s mistake was caught by the BravoSuperfans Instagram account, who so kindly shared the screenshot (taken BY Madison, OF Madison during the ‘Southern Charm’ reunion) for all of social media to enjoy/cringe from secondhand embarrassment. 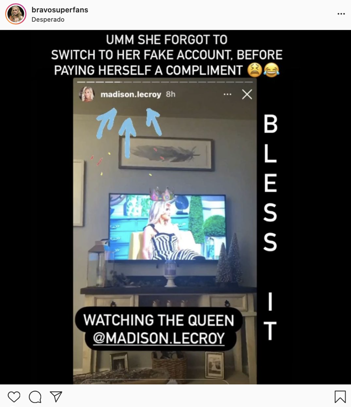 “Watching the queen, @Madison.Lecroy,” Madison (seemingly) captioned the photo of herself, while also placing a crown emoji on her head.

Madison being exposed as her own hype man follows the recent ‘Southern Charm’/MLB/Jay Cutler/Kristin Cavallari/Jenny from the Block drama that no-one either asked for nor could look away from.

For those of you that somehow managed to avert your eyes from the garage fire, here’s a quick summary:

Last month, Kristin and ex-husband Jay took to social media with matching Instagram posts calling out “users” – seemingly in response to Madison, who days before had mocked Kristin and Austen Kroll (Madison’s ex) on Instagram Live.

While Kristin maintained she and Austen are just friends, Madison went on to share a series of texts between herself and Jay, basically confirming that she had met up with the former NFL player at some point, possibly for a post-breakup hump ‘n’ pump sesh.

Fast forward to the ‘Southern Charm’ reunion, Craig Conover called Madison a homewrecker and accused her of sleeping with a married former MLB player. Many fans speculated that the mystery “ex-MLB player” was Alex Rodriguez, who is not married, but is currently engaged to Jennifer Lopez.

Though other names and theories were thrown around, Danni Baird confirmed on the Reality Life with Kate Casey podcast that Madison was in contact with A-Rod at one point.

“Months before that, I had heard … she had told me that they were FaceTiming or something and I just assumed,” Danni said. “I never asked more about it or anything like that, so I just kind of forgot about it … .”

Alex has denied the rumors involving Madison, however, he was following the ‘Southern Charm’ star on Instagram prior to this whole debacle.

RELATED STORY: ‘Southern Charm’ Star Kathryn Dennis Talks About Her Racist Message Scandal & Discusses Her White Privilege: “This Was a Wake-up Call for Me”