From defending their home state to defending their mom’s questionable parenting, the stars of the ‘Teen Mom’ franchise (both past and present) have been keeping themselves busy lately! In an effort to get you up-to-date on the latest Teen Mom OG and Teen Mom 2 news, The Ashley brings you the Teen Mom News Pile.

During an interview Friday with The Raspy Voice Kids podcast (which is based out of West Virginia), the ‘Teen Mom 2’ star mentioned that one of her biggest pet peeves is when people poke fun at her for being from West Virginia.

“I think [what really gets under my skin is] what everyone does about West Virginia in general…there’s a stereotype around West Virginia,” Leah told the podcast’s hosts. “Any person who is from West Virginia, especially on a bigger platform, I feel like we’re stereotyped in a lot of ways.”

Leah, who hails from the town of Elkview in The WV, says she’s trying her derndest to tell people how great her state actually is.

“I think there’s so much beauty in West Virginia…and I continue to highlight that on my social media, and on the upcoming season [of ‘Teen Mom 2’],” Leah said. “And that’s what I’ll continue to do because I think it’s something people need to see more of.”

During the 20-minute interview, Leah also talked about an upcoming project she’s launching in October. While she refused to say what the project is exactly, she did mention that it has “some pretty cool co-hosts.”

So…she’s basically confirming this is happening…

Chris and Kail are currently at odds (again), but not too long ago things between the contentious co-parents were going well…so well, in, fact, that they were even talking about teaming up on a project.

On a recent episode of his P.T.S.D. Pressure Talks with Single Dads podcast, Chris revealed that, at one point, he and Kail were getting along so well that they were talking about teaming up to do a podcast.

Chris said he’s a bit bummed that the Kail/Chris podcast never happened, as he felt it would have been good for their co-parenting relationship.

“Say we had a beef, like now, you dead-ass face-to-face say what the hell you gotta say.”

On the same podcast episode, Chris stated that he believes that Kail chooses to not get along with him, and that this is evident because she’s able to get along with her other baby daddies, Javi Marroquin and Jo Rivera.

Sophia Abraham says she doesn’t need to be “saved” from her mom, Farrah Abraham; Farrah’s behavior continues to suggest otherwise.

The mother-daughter duo addressed concerned “fans” this week on social media, The Sun reports, insisting the “#SaveSophia” campaign was not needed.

“ … I got a bed, I got a roof, and I’m fine,” Sophia told viewers on social media in a clip screen-recorded and reposted on TikTok by @royaltysmommy909.

Farrah then jumped in the video to reiterate Sophia’s claims, although she seemed a little confused as to what was going on.

“Oh my god, I got a bed and a roof and I’m fine and I eat and I sleep and have good mental health,” Farrah said. “I’m, like, overall an amazing person.”

Sophia then interjected to mention the “Save Sophia” campaign.

“They’re talking about Saving Sophia,” Sophia tells her mom, to which Farrah responds with what we can only assume is her attempt to be funny.

“Saving Sophia. Is that like Saving Private Ryan?” Farrah asks. “Did I miss the show? That’s what I thought. I just confused you all cause I’m THAT good of an actor.“

According to Farrah, she’s not just a good actor, but also a good mom.

During a recent episode of E! News’ Just the Sip podcast, Farrah bragged about her stellar parenting skills and how prepared she is for Sophia’s inevitable wild teenage phase.

“Sophia’s got an awesome mom and I’m ready for her crazy years,” she said.

Earlier this summer, Farrah allowed Sophia to pose with a pregnancy test on social media and then defended that decision, claiming “young ladies” should “be competent” and “play around with the fun pregnancy tests.”

Kail Lowry & Vee Torres apologize after being called out for making light of having COVID-19 on their podcast.

After declaring themselves “COVID queens” on the August 3 episode of their Baby Mamas No Drama podcast, Kail and Vee were hit with a wave of one-star reviews, with fans calling the hosts out for not taking the virus seriously.

In response to the criticism and negative reviews they were racking up, Kail and Vee addressed the issue on the most-recent episode of their podcast, apologizing to anyone they had offended.

“ … We are incredibly sorry for last week’s episode,” Kail said. “We definitely didn’t mean to offend anybody. I think we were just trying to make light of what we personally were going through because, what is the saying? You have to laugh so that you don’t cry? We obviously know that so many people have been affected by COVID and, ya know, it was never our intention to offend anyone.”

Vee added that she and Kail “never intended to downplay the severity of COVID.”

During the original episode, Kail and Vee revealed they were both recovering from COVID, which Kail said she believed she brought home following a trip to the Dominican Republic with her kids. The two also talked about their various symptoms on the podcast, with Kail revealing that all of her four children had tested positive for COVID-19, as well as her ex-husband, Javi Marroquin.

More controversially, the hosts jokingly called themselves “COVID queens” during the episode. (The original title of the episode was “Quarantine Queens” but it was changed after the negative comments started pouring in.)

During the episode, Kail and Vee discussed recent and upcoming travel plans, which didn’t go over very well with many of their podcast listeners– many of whom criticized the two for their “tasteless” behavior. 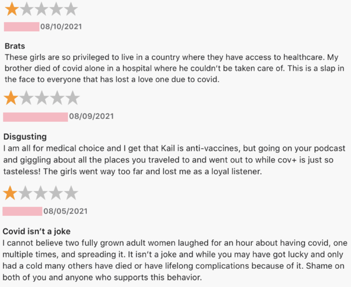 “These girls are so privileged to live in a country where they have access to healthcare,” one person commented on the girls’ podcast. “My brother died of covid alone in a hospital where he couldn’t be taken care of. This is a slap in the face to everyone that has lost a love one due to covid.”

“I cannot believe two fully grown adult women laughed for an hour about having covid, one multiple times, and spreading it,” another comment read. “It isn’t a joke and while you may have got lucky and only had a cold many other have died or have lifelong complications because of it. Shame on both of you and anyone who supports this behavior.”

Other one-star reviews called the Baby Mamas No Drama hosts “gross,” “garbage,” and “disgusting” for the comments made during the since-renamed “Quarantine Queens” episode. 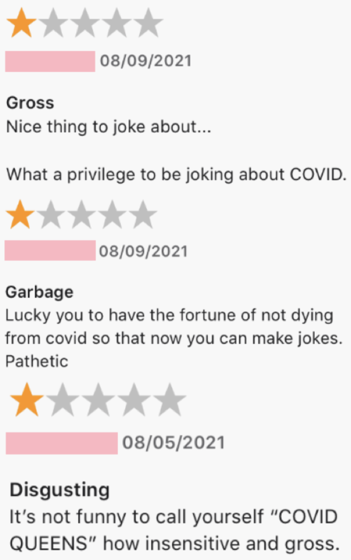 While apologizing for their previous episode, Vee explained why she and Kail were laughing about their COVID situation.

“ … This is just a place where we come and we take a break, ya know, we all come here and we laugh,” she said. “We kind of take a break from the world for an hour and we chat as girlfriends and that’s all it is.

“But if you were offended or anything, we’re deeply sorry,” Vee continued. “Our hearts go out to all of you and, you know, if you guys are going through anything and if your lives have been affected by the pandemic, we’re truly sorry. We’re also thankful for each and every one of you.”

You can listen to Kail and Vee’s apology below, via this clip captured by the Instagram account Teen Mom Shade Room.