Cameran Eubanks is making her return to TV, more than a year after announcing her departure from Southern Charm.

Multiple media outlets confirmed on Tuesday that Cameran will appear on a couple of upcoming episodes of The View as the ABC daytime talk show continues searching for a replacement for former co-host Meghan McCain.

Cameran is one of many guests slated to appear on ‘The View’ when it returns September 7. She won’t be the only guest co-host with ties to Bravo, as Eboni K. Williams of Real Housewives of New York City will also have a turn at ‘The View’ dais. 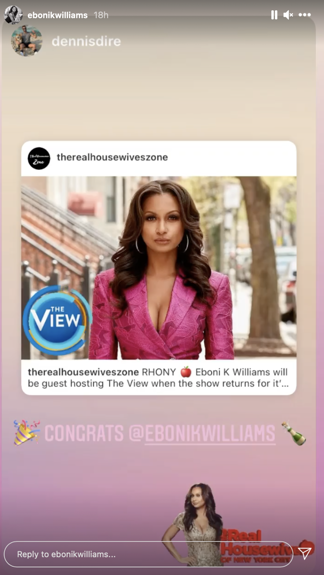 Cameran, Eboni and the other guest co-hosts will appear alongside the show’s returning co-hosts Whoopi Goldberg, Joy Behar, Sunny Hostin and Sara Haines.

While the former ‘Southern Charm’/Real World star has yet to comment on her new gig, Cameran revealed in her book, One Day You’ll Thank Me, that she was “pretty certain” she was done with reality TV following her departure from ’Southern Charm.’

“I’ve got two shows under my belt, and at this point I am enjoying the simpler life without a camera in my face,” Cameran— who got her start on The Real World: San Diego—wrote.

In May 2020, Cameran announced she was leaving the Bravo reality series after six seasons. That same week, she addressed allegations that her husband, Dr. Jason Wimberly, had an affair– a rumor she vehemently denied.

Cameran insisted at the time that she had made and informed Bravo of her decision to walk away from ‘Southern Charm’ months earlier, and that her leaving the show had nothing to do with the rumors surrounding her marriage.