Flipping Out
3 weeks ago by Chelsea & The Ashley
12

After years of sharing his personal life on TV and now, discussing it on his radio show, Jeff Lewis says his five-year-old daughter has requested to no longer be included in his content.

According to People, the former Flipping Out star revealed last week on his SiriusXM radio show Jeff Lewis Live that Monroe, the daughter he shares with ex Gage Edward, was informed by Gage that Jeff was talking about her on the radio and the tot was not happy. She later told her dad to quit discussing her on his radio show or she wouldn’t speak to him anymore!

On another radio show, Jeff admitted that Monroe has been denied admission to several private schools because of who Jeff is, leaving him and Gage to now explore the possibility of sending their daughter to a Catholic school instead.

Jeff said that Gage allegedly decided to tell Monroe that they are considering sending her to Catholic school after the five-year-old revealed to him her fear of nuns.

“Gage thought he should tell her that I’ve been talking about her on the radio and that as a result, she’s not going to be admitted to certain schools and that she’s going to have to go to a Catholic school with the nuns,” Jeff said. “So she called me crying and … she was pretty mad.”

“I didn’t expect her to say this so young, I expected her to say this when she was a teenager, but she said if I continue to talk [about her] on the radio that she will not see me again until she’s a grownup,” he continued.

Jeff went on to say he “hopes” Monroe’s feelings about the school situation change, but in the meantime, he’s upset with Gage for “getting in her head.”

“I texted Gage and I said, ‘Look, I never say anything negative about Monroe to you ever and this feels divisive. I would never want to turn her against you, which is what it seems like you are doing right now. You’re mad at me, please don’t use her to take it out on me,’” Jeff said.

Jeff said he didn’t appreciate his ex getting in Monroe’s head and hopes Gage “realizes he’s made a mistake in using her to get back at me.”

Jeff also revealed he and Gage had been “getting along famously and co-parenting nicely” until news of his “super spreader” holiday party came out recently.

“This is very bad timing for us,” he explained. “We’ve heard back from one school and they got back to us right away. They said, ‘We know who you are. We know who Monroe is and … we are not interested in Monroe.’ That’s what they said.”

This isn’t the first time Jeff’s public platform has impacted Monroe’s education. As The Ashley told you back in 2019, Jeff voiced some complaints about his then-two-year-old’s prestigious Montessori preschool on an episode of Jeff Lewis Live, which resulted in the toddler’s expulsion.

Despite running into yet another issue with Monroe’s education, Jeff remains optimistic, claiming “all of this is happening for a reason.”

“I want a good education for my daughter and I think there’s a lot of options out here,” he said. “I don’t think it’s one of these five schools that Gage and I have picked. If they choose not to admit her, that’s fine. We’re going to find the right school for her.”

UPDATE! After Jeff discussed this on his radio show, Gage spoke out on Instagram Stories  to tell his version of events, calling out Jeff, Sirius XM and the executives and producers behind Jeff’s show for exploiting Monroe.

“What is unfair– and what I will speak about– is the continued exploitation of a minor for content,” Gage wrote on Tuesday. “In the past and certainly recently, untrue and false stories have been told with an embellished narrative about my daughter.”

Gage went on to state that he believes Jeff and those associated with his show purposely put stories about him and/or Monroe into the media because they know those stories will get publicity.

“Equally as disappointing as the person that continues to talk about her, is SiriusXM and the executives, producers, and people in charge of RandyAndy,” Gage continued, stating that Jeff & Co. purposely plant stories they know will get written about in the media.

“Often when I’m discussed or when my daughter is talked about, the PR machine of SiriusXM and RadioAndy package clips, audio files, copy, and headline ideas for these stories to run. I’ve seen the emails, this really happens.

“In my opinion, SiriusXM is equally involved in whatever you want to call this,” he continued. “It’s encouraging and rewarding exploitative behavior, which always leads to more of the same. More headlines, more listeners, more subscribers.”

Gage reminded everyone that this is all happening, in his opinion, at Monroe’s expense.

“The person you are leveraging however is five years old,” he wrote. “It’s gross. She has a right to privacy. Enough is enough.” 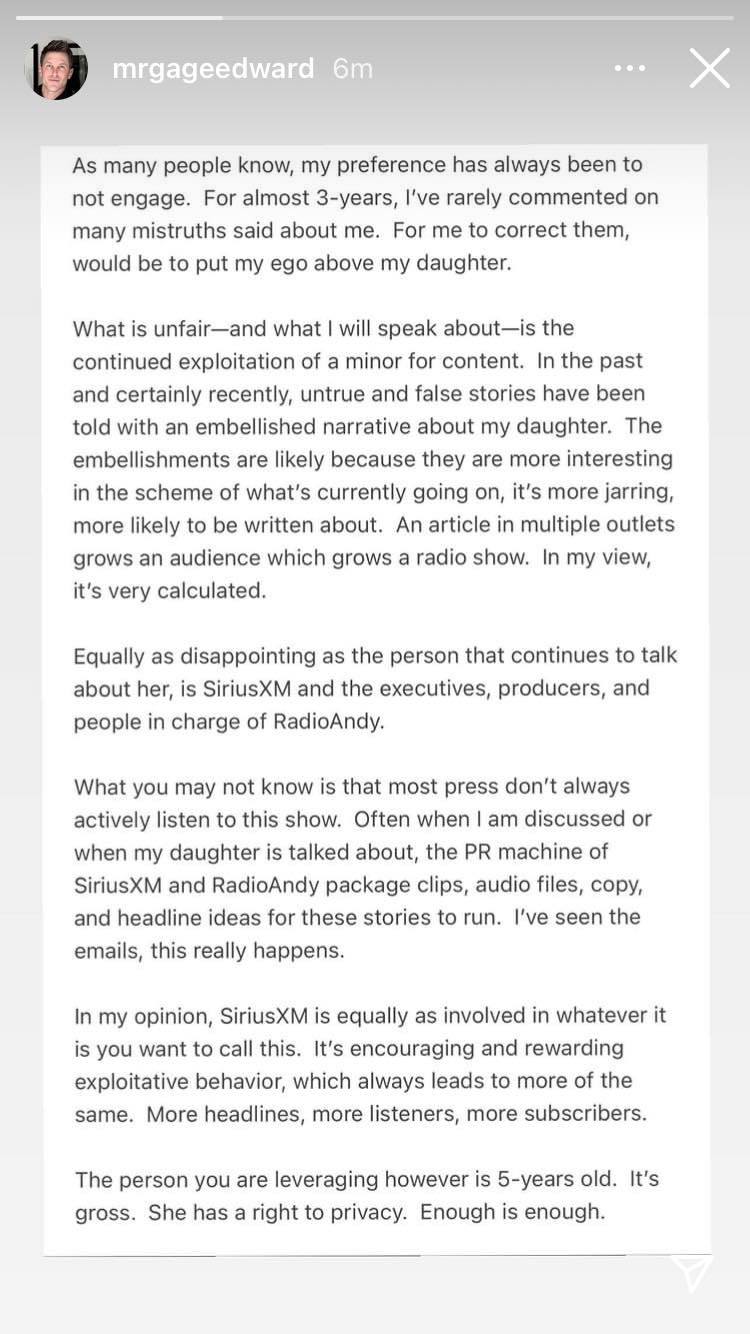 RELATED STORY: ‘Flipping Out’ Star Jeff Lewis Says He Doesn’t Regret Throwing Holiday Party Where He & One-Third of Guests Got Bad Cases of COVID: “Worth Almost Dying For”>