Cory Wharton is adding yet another limb to his family tree.

The Teen Mom OG and The Challenge star announced on Saturday that he and his long-time girlfriend, Taylor Selfridge, are expecting their second child together. Cory and Taylor are already parents to daughter Mila, whom they welcomed in April 2020. Cory also has daughter Ryder, whom he shares with his ‘Teen Mom OG’ co-star, Cheyenne Floyd.

In the caption of a family photo posted to Instagram, Cory— who has also appeared on basically every MTV reality show that exists— announced that Baby No. 3 is due June 8.

“We will welcome a new member to the family! I couldn’t think of a better way to spend my 31st birthday,” Cory wrote to the new baby. “Each one of my kids have continued to push me into making me a better man, so I know you’re gonna do the same. Throughout the years the satisfaction I get from raising my two lil girls is unmatched. The joy that they bring me, the excitement is unmatched. I truthfully feel like God has put me in a position that I’m so lucky & blessed to be in.

“As a kid my dad wasn’t able to be around, and I feel like that’s why I try and give you girls EVERYTHING that I have. I can’t wait to watch you grow with your sisters Ryder & Mila. I’m telling you right now both those girls love you so much.”

He also addressed Taylor, who— as ‘Teen Mom OG’ fans know— was fired from the show after several racially insensitive social media posts resurfaced in 2020. Although they were due to appear in a self-filmed special about Mila’s birth, MTV cancelled the special on the night it was supposed to air.

“Taylor, I don’t know too many people to put up with me for as long as you have,” Cory wrote. “But no seriously, I love you bby & I can’t wait to start this adventure with you and continue to build this family up . I also wanna say thank you to my support system those ppl know who you are just know I love you all and I appreciate it everything you do for me.”

Taylor also announced the news on her Instagram account, writing, “My growing family…
In June we will be welcoming our new little peanut to the world. We are so excited to meet you baby. Mila is going to be a big sister which is so crazy to me. Ryder already is a great big sister. My whole life I knew I was meant to be a mother, I love my babies more than anything in this world. 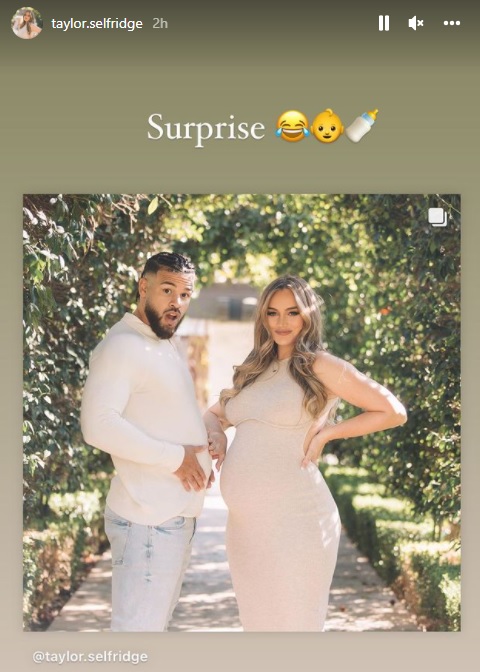 “My heart grew twice the size and I knew I’d love you just the same as your sisters. I can’t wait to see your little face (even though you’ll look nothing like me & only daddy). Cory, I love you. I know everyone knows this but I know the best, you are really the most amazing father. You always put a smile on my face when you’re with our girls & they love you so so much. I know this next one will be a new adventure for us but I know we can do anything together. Happy birthday my love. Cheers to another beautiful child.”

Cory and Taylor met in November 2017 while both were filming a season of MTV’s Ex on the Beach. About a month after Cory returned home from the shoot, he found out that he was the father of Cheyenne’s daughter, Ryder. Because he did not know he was Ryder’s dad, he had not been present at her birth. Cory and Taylor announced in February 2019 that they were officially a couple. They announced Taylor’s pregnancy with Mila in October 2019.

Cory and Taylor have yet to reveal if they’re having a boy or a girl.