Cory Wharton is officially a father of two!

Cory and Taylor announced in October that they were expecting their first child together and in January, the couple revealed they would be having a girl.

On Thursday, Cory to Instagram Live (his second home) to tell his followers that his daughter had arrived safely and that the baby and Taylor were healthy and doing well.

“I’m still not gonna tell you guys her name but she’s here, everybody’s safe, everybody’s healthy,” he said. “Taylor’s fine, the baby’s gorgeous, it looks just like me. I can’t wait to show you guys.”

Cory went on to give Taylor and all women props for the going through the birthing process, which he dubbed “no joke.” In the background, Taylor revealed that their baby is “big.”

“The baby is big … ,” Cory echoed in the video. “The doctor said she’s anywhere between 8 and 9 pounds.”

Taylor herself shared some snapshots from the hospital room to Instagram, debuting her daughter’s head full of hair and sharing with her followers that she was in labor for 22 hours. 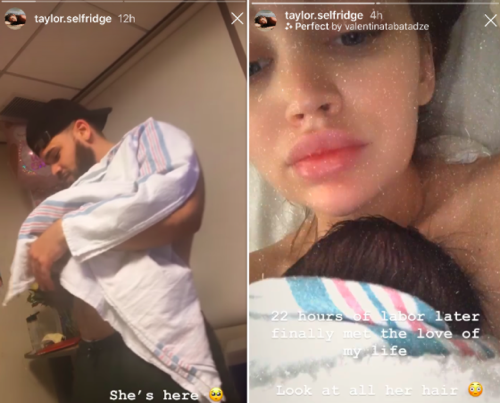 Prior to the baby’s arrival, Cory kept his fans updated via Twitter on Taylor’s health, right up to when her water broke on Wednesday night and Cory announced it was “GAMETIME.” 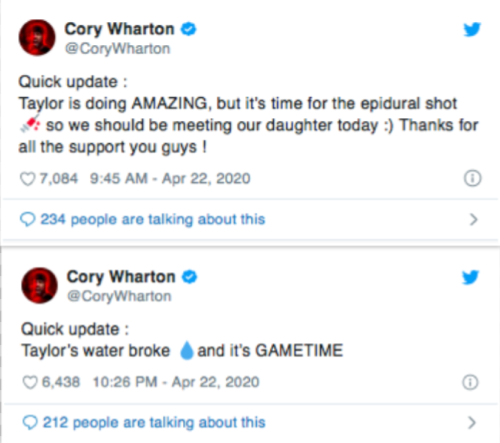 Cory and Taylor met during Season 1 of Ex on the Beach, with Taylor having previously appeared on Season 5 of Are You The One? in 2017. They both now appear on ‘Teen Mom OG’ alongside Cory’s other baby mama, Cheyenne Floyd, and their daughter, Ryder.

On Wednesday night, Cheyenne posted on Twitter how excited Ryder is to be a big sister.

“Ryder waited up extra late to hear the good news,” she wrote. “God is good she’s so excited.”

Cory is also appearing on the current season of The Challenge: Total Madness.

RELATED STORY: ‘The Challenge’ Star Melissa Reeves Answers Fans’ Questions About Being Pregnant While Filming Season 35, If the Baby is Kyle Christie’s & More