Varya Malina‘s first visit to see her man, Geoffrey Paschel, in prison did not go well.

The former 90 Day Fiancé star opened up about the trip to see Geoffrey— who has been behind bars since October when he was convicted of aggravated kidnapping, domestic violence and interference with an emergency call. Varya wrote on Instagram that seeing seeing her legally-challenged lover in prison “the hardest thing I’ve ever seen in my life.”

“I was supposed to life his spirits up but he was the one who cheered me up,” Varya wrote on Instagram Stories of Geoffrey. “The hardest thing I’ve ever seen in my life is my beloved one, who is like an animal in a cage. And I can’t do anything to help him right at the moment. It feels miserable, the lowest low and I’m so emotionally exhausted.” 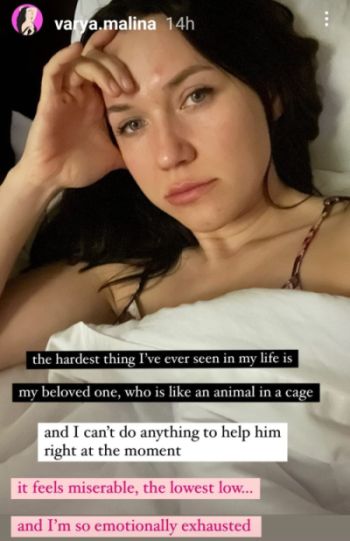 As The Ashley previously reported, Varya has stood by her man through his arrest, trial and eventually conviction for his crimes against another woman. Geoffrey was sentenced to 18 years in prison after being found guilty in October of aggravated kidnapping, domestic violence and interference with an emergency call. The charges resulted from a domestic dispute that occurred in 2019 between Geoffrey and an ex-girlfriend.

After Geoffrey was sentenced, Varya expressed her surprise that he received such a long sentence; however, she was adamant that Geoffrey would win the appeal he planned to file. Things haven’t gone as planned for the “90 Day Fiancé” couple, though, with the court date Geoffrey was scheduled to have this week being delayed.

“The motion for the new trial was delayed for a variety of reasons, which nobody had time to explain [to] us, and I doubt that cared,” Varya posted on social media earlier this week. It was delayed for a date. Nobody knows which date. It’s all such a stupid circus.”

Despite the setback, Varya wrote on Saturday that she and Geoffrey haven’t lost hope that they would be able to spring him from the clink via a new trial.

“But if you think he’s about to give up, you are so wrong,” she wrote. “Even in these horrible circumstances he was the same goofball I fell in love with.”

She later posted more about the visit.

“The first visitation was so emotionally exhausting, but it was worth every minute nonetheless,” Varya wrote. “We both had that same feeling as at the airport in Russia, when we met for the first time. I jumped and cried as he smiled and joked about hugging me like my father. I planned to go live [on Instagram] right after the visitation but couldn’t find any energy to share it with you. I felt that the best thing for my mental health was to hide to some invisible place where no one can see or hear me and vice versa.”

Varya wrote that she was going back for another visit with Geoffrey on Saturday.

“Ultimately after a good sleep and nice talk with the family and my close friends, I feel fresh, recovered and ready for the second day of visitation.”

According to Starcasm, Geoffrey’s motion for a new trail was continued until May 26. (Click here to learn more about what the main arguments Geoffrey and his legal team are making in order to get Geoffrey a new trial.)