Teen Mom 2, Video-a-Polooza
2 months ago by The Ashley
15 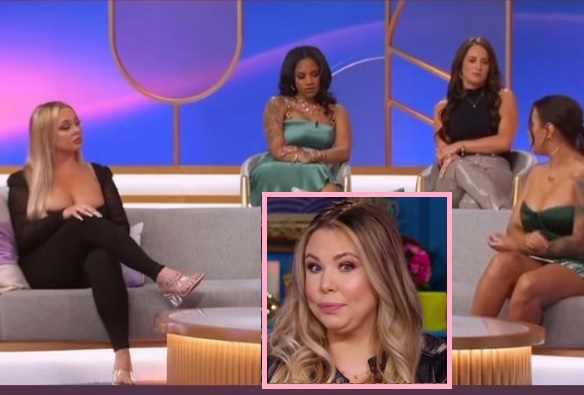 The cast of Teen Mom 2 continues to be a trainwreck, right up until the very end.

On Monday, MTV released a clip of the Season 11 Reunion that caused quite the ruckus on social media, with nearly all the cast members taking to Instagram defend their friends on the cast– and call out their enemies.

Leah Messer ended up in the hot seat after co-host Dr. Drew Pinsky asked her about her seemingly strained friendship with Kail Lowry (who chose not to attend the Reunion and instead appeared virtually). Leah started to join in with Jade Cline and Briana DeJesus to discuss why Kail wouldn’t want to be at the Reunion, only to have Ashley Jones become uncomfortable and walk off the stage.

Let’s begin wading through this Tub ‘o’ Trashy Drama, shall we?

The clip begins with Dr. Drew asking the girls— Leah in particular— why they think Kail wouldn’t want to attend the Reunion. Leah plays dumb, only to have Jade get snappy with her, saying they all know Kail refused to attend because she doesn’t get along with Briana. Dr. Drew– that rascally pot-stirring silver fox— then takes the opportunity to ask Leah about why she and Kail are no longer close.

“She stopped filming right? I really haven’t been talking to her very much…” Leah says as she trails off.

Dr. Drew mentions that Leah and Kail used to be close, to which Leah replies sadly, “we were pretty close.”

Leah started saying that their friendship may have become strained because she chose to appear on Teen Mom Family Reunion (a show Kail declined to be on). Leah then states that she “liked” a “self-growth post” (that was posted by Briana on Instagram) that Kail “was upset about.” Meanwhile, Ashley shimmies herself out of her chair and quietly starts to walk  off stage. Drew, who is practically salivating at all this girl drama, asks Ashley why she’s leaving.

Ashley tells the gang that she’s not down to sit around while they Kail-bash, as she’s close to Kail. Leah seems to realize that she is going to look really bad if she stays so she, too, gets up and leaves the stage. Briana and Jade continue to talk about Kail with Dr. Drew and Nessa as the clip trails off.

After the clip went live, Kail took to Instagram to clarify a few things, and to praise Ashley for having her back. The fact that she did not also praise Leah was quite telling as well.

“I have never been upset with Leah for going on ‘TMFR,’ Kail wrote. “In fact, I supported her and told her to go & collect her check…Jade why are you commenting?” 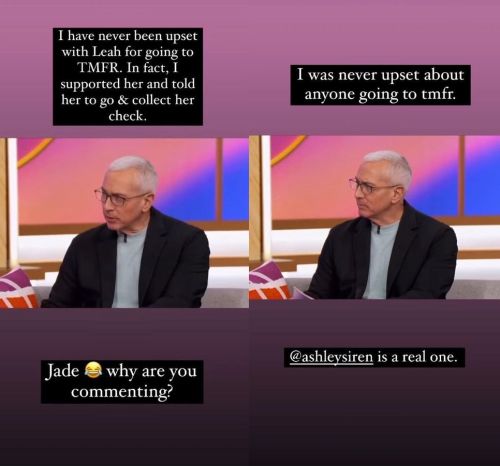 “I was never upset about anyone going to ‘TMFR,'” Kail continued, adding, “Ashley is a real one.”

Ashley then jumped on Instagram to add her comments in.

“Let me make something extremely clear,” she wrote. “I would never sit in a room and be silent while my friend is being chopped. For that purpose, I removed myself.”

She went on to state that she did it because she felt Dr. Drew and/or MTV was being shady by not including Kail via videochat in the segment.

“It’s not about loyalty. Kail was there via Zoom. Why wasn’t she present for this segment?” Ashley wrote. “It’s messy. Period. And the next time you ask me why I’m in it or making a comment, refer to this video. It’s always 2 against 1 [Jade and Briana against Kail]. And respectfully, Kail got friends too.”

In the comment section of the post on Instagram, Ashley made it clear that the truce that she and the other ‘Teen Mom 2’ girls made on ‘Teen Mom Family Reunion’ is now null and void.

“I been trynna keep the peace since ‘TMFR.’ I’m done with that,” Ashley wrote.

Next up to post on Instagram was Leah. She addressed the situation and the events shown in the clip. However, she quickly deleted the statement she posted to Instagram. (Luckily, The Ashley screenshotted it for all of you nosy folk.)

“This segment wasn’t supposed to be anything about Kail,” Leah wrote in the deleted post. “I can only speak for myself and my personal experience but the level of disrespect, bullying/[shaming], and mean girl attitudes is disgusting. I’d be ashamed of myself!

“I showed up, completed my segments, collect my money & rolled out. That’s what I will continue to do but don’t take my kindness and support for all women growing as a sign of weakness or being gullible.

“We are grown-ass women with children watching our lives,” Leah wrote. “We should have enough dignity and self-respect to act as such!” 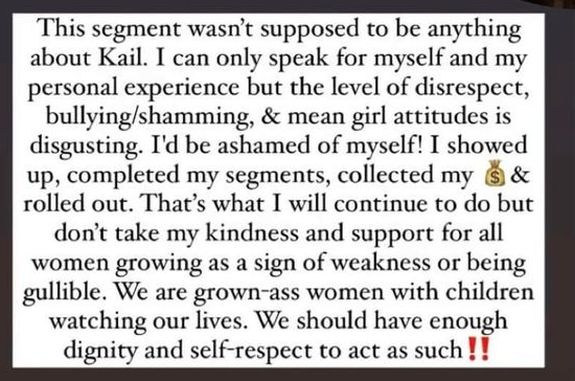 Later, Leah reposted a longer, more in-depth statement regarding her strained friendship with Kail, as well as how tired she is of all of the ‘Teen Mom 2’ cast drama. (You can read Leah’s full, “stand in your power” statement by clicking here!)

“The way it was edited made it seem like it was more negative or coming off condescending when I was just trying to lighten the mood. LOL it was all weird and awkward…” Jade wrote on Instagram Stories, denying she has any issues with Leah.

She agreed that it would be easier if all of the ‘Teen Mom 2’ cast members got along, but stated that, even if some of the girls don’t get along, “we can still[do] things like ‘TMFR’ and the reunions and get the job done and coexist.

Jade also defended Dr. Drew’s tendency to poke and prod drama out of the girls.

“It’s TV. TV makes a lot of situations different,” she wrote. “And the network will always want to bring up things that will spark interests in people.”

The ‘Teen Mom 2’ Season 11 Reunion airs Tuesday night on MTV. You can watch the clip that caused all the drama below! (The scene in question starts at the 5:07 mark, by the way.)

What a SEASON it’s been! With all the mamas here to recap everything that went down, we can’t help but notice someone is missing. 👀
Don’t miss Part 1 of the #TeenMom2 finale, tomorrow night at 8p on @MTV! 🍿 pic.twitter.com/qM8QyuUAqN