Vanderpump Rules
4 weeks ago by Chelsea
0

Scheana Shay recently tied the knot with baby daddy Brock Davies, and in true Vanderpump Rules wedding fashion, there was plenty of drama happening leading up to-– and during-– the event.

While nearly all of the current (and some of the former) ‘Vanderpump Rules’ stars traveled to Cancun, Mexico, last week to watch Scheana marry Soulmate No. 2, Page Six reports that Raquel Leviss and Tom Schwartz made out during the festivities, with a source claiming to have heard that “more happened” between the newly-single co-stars.

As The Ashley previously told you, Tom and Katie Maloney announced in March that they were divorcing after five years of marriage, while Raquel ended her engagement to James Kennedy in December.

As photos poured in on social media of the ‘Vanderpump Rules’ cast partying with each other, Katie shared photos also taken in Cancun, but only featuring Kristina Kelly.

“Vacay Mode,” Katie captioned a poolside photo of herself and Kristina. “#happyearlybirthdaykk #girlstrip.”

Word soon got out that Katie was in Cancun but not hanging out with the rest of the cast, leading Brock to explain his co-star’s absence from the pre-party festivities, as well as the wedding itself. 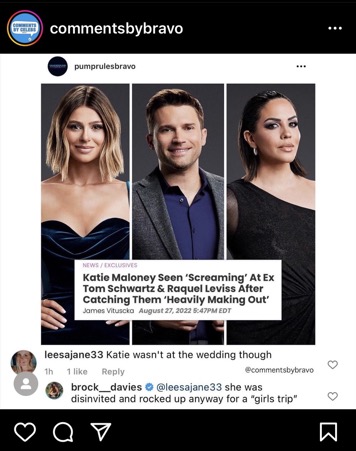 “She was disinvited and rocked up anyway for a ‘girls trip,'” Brock alleged.

Not long after Brock’s remark was picked up by @commentsbybravo on Instagram, Katie fired back to deny  the claims.

“I’m enjoying all the untruths,” she wrote.

Katie has yet to clarify if these “untruths” are referring to the alleged Raquel and Tom make-out, her “rocking up” to Cancun uninvited, her being disinvited from Scheana’s wedding, or all of the above; however, she and Kristen Doute posted identical videos on Instagram hinting that one of them may currently be on the outs with an ex.

In the clip, the former Witches of WeHo–- sans Stassi Schroeder–- sat on the floor with candles, tarot cards, crystals and other accoutrements, claiming they were either casting a “hex on an ex or conjuring new boyfriends.”

“Which one do you think it is?” they asked followers.

As for Tom, he appears to be unbothered (per usual) by the alleged Raquel hookup “rumors,” even going as far as to post a photo with Raquel’s former fiancé during the Cancun celebration. 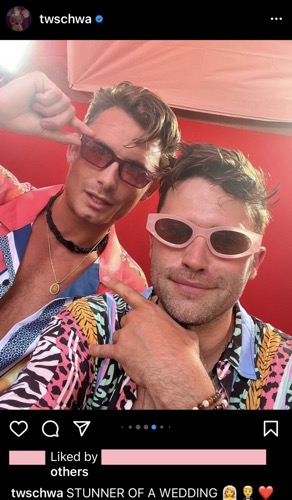