Exclusives, Teen Mom Family Reunion
4 weeks ago by The Ashley
24

Things on the set of Teen Mom Family Reunion Season 2 just went from bad to worse.

Just days after The Ashley broke the news that a huge fight had erupted on the set of  ‘Teen Mom Family Reunion,’ resulting in Briana DeJesus and Ashley Jones (and their moms) being sent home, The Ashley hears that there is even more trouble on set.

The Ashley can exclusively reveal that the crew members who are currently filming ‘TMFR’ in Oregon have gone on strike, putting down their cameras, etc. and refusing to work. From what The Ashley hears, the strikers are camera operators, audio and sound techs, etc.

According to the IATSE, this is a “recognition strike,” which is defined as “a strike organized by workers against their employer, seeking to force the employer to acknowledge the union as their collective bargaining agent.”

The Ashley’s sources tell her that the execs used a different company for crew for ‘Teen Mom Family Reunion’ than they do for Teen Mom 2 or Teen Mom OG.

“They’ve used the company for [‘Family Reunion’], both seasons,” one behind-the-scenes source tells The Ashley. “We’ve heard that it’s because the network felt that the [regular company that does ‘Teen Mom’ show production’] didn’t have enough control of the set, but not sure if that’s true. So there are different producers, tech guys, etc. on this set than the cast is used to.”

(The Ashley has been told that the company used for ‘Family Reunion’ is a company that works on several other major MTV reality shows.)

The union has advised its members not to cross the picket line and accept jobs on the ‘Teen Mom Family Reunion’ set, due to the strike. This has left the show’s execs scrambling to find replacements so that the entire set isn’t forced to close down. (The cast has been there for about a week, and is due to stay another week.)

“They are frantically looking for [crew members] who are willing to fly up to Oregon immediately so they can finish the filming and don’t have to shut down,” the source tells The Ashley. ”

“They’re basically begging people to come up there,” someone else tells The Ashley. “Between the fights, some COVID issues and now the crew strike, this filming has been plagued with issues. It’s kind of a disaster!”

UPDATE! The strike has continued into Tuesday, with the former crew members creating a picket line outside of the Oregon resort where ‘Teen Mom Family Reunion’ is being filmed. The first photos of the picket line have also been released. 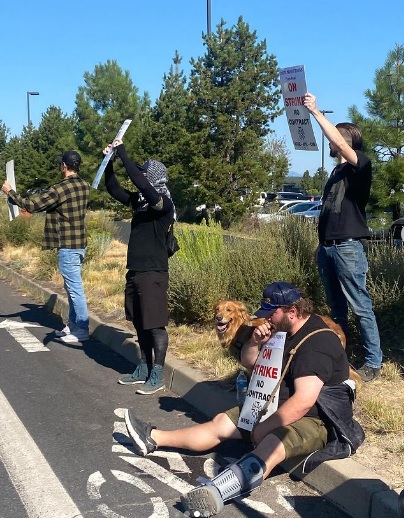 The strikers are carrying signs stating that they are on strike due to having “no contract” and are protesting the fact that the company Onsite Productions will not negotiate a contract with them.

A rep for the IATSE confirmed to The Ashley on Tuesday that the strikers are “looking for industry standard health and retirement benefits, that were not being paid. In order to do so, they joined together and are unionizing.”

The IATSE repo also confirmed that “so far management hasn’t come to the table to negotiate a contract with those benefits, so the workers walked off the job.”

The local IATSE posted several photos of the picket line to social media.

STRIKE ALERT: The ‘Teen Mom’ crew’s picket line in Bend, Oregon is up!

It’s time for management to come to the table and negotiate a fair contract in good faith! @TeenMom @MTV @paramountco

Although the IATSE is advising its union members not to cross the picket line and take over filming duties, The Ashley has been told that the producers began calling former crew members who have worked on ‘Teen Mom OG’ and ‘Teen Mom 2’ to come to Oregon immediately and finish the job. From what The Ashley hears, the producers have been able to put together a shoestring crew of former workers to complete the week.

A behind the scenes source tells The Ashley that the ‘Teen Mom’ gang is staying at the opposite end of the resort from where the strike is happening, so it is not likely to interrupt filming, which was due to begin again today.