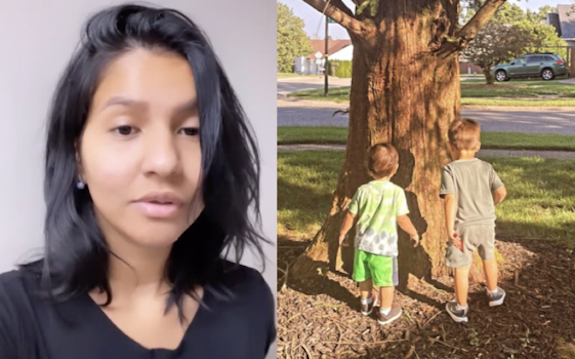 Former 90 Day Fiance star Karine Martins took to Instagram over the weekend to provide an update on the custody and visitation situation regarding the two children she shares with ex Paul Staehle.

As The Ashley previously told you, neither Karine nor Paul currently have custody of sons Pierre and Ethan. Paul confirmed in July that the children were in CPS custody, noting at the time that the children might go to live with his family members at some point; however, it has not been confirmed if this updated living situation has occurred, or if the kids are still in foster care.

While Karine didn’t mention where her children are living, she did state in her post that she is allowed to see them. She also stated that she is barred from discussing the situation at length.

This post comes weeks after Karine was slammed by fans on social media for smiling and busting a move on Instagram despite having lost custody of her children.

“I come here to say that my children are not with me yet, but I can see them, I can’t take it anymore and there are times when I want to talk about what the 3 of us are going through,” she wrote. “I’m always a good mother and I’m going through it, it’s not just me who suffers, my children suffer too. I will never stop fighting for you two. Pierre and Ethan you are my life.”

On Monday, Karine posted another message on Instagram, this one addressed to her younger son, Ethan, who is growing up without her.

“Time goes by so fast, I didn’t see your first steps, I didn’t hear your first sentences. His smile is beautiful and his voice is sweet. I love you,” Karine wrote.

Karine’s (documented) visitation with Pierre and Ethan comes just weeks after the Kentucky Court of Appeals ruled to uphold the restraining order taken out by Karine in December 2021 against Paul–- the very same order that resulted in Paul filing two petitions for emergency protection against Karine.

Karine had filed the initial restraining order while in the process of divorcing Paul, and after the decision of the court was made public, it was revealed that Karine accused her ex of forcing her “to have sexual intercourse without her consent multiple times,” with the alleged incidents recorded and posted online.

Karine also accused Paul of engaging in other abusive behaviors, including threatening to have her deported.

Paul claimed in July that Karine was–- and presumably still is–- living in a home provided for her through a government program. According to Paul, Karine was accepted to the program after claiming she was “a victim of human trafficking”– something Paul has denied more than once.

RELATED STORY: “90 Day Fiance” Star Jeniffer Tarazona Reveals Why She & Jesse Meester Have Broken Up After More Than A Year of Dating