According to TMZ, Mike was released from prison on Thursday morning around 8:30 a.m. He was met by a swarm of cameras before heading off to pickup a post-prison meal at Mike’s favorite pizza place, Denino’s in Matawan, New Jersey. The $133 to-go order reportedly included four pizzas, chicken fingers, fries and fried shrimp. (Sadly, Denino’s doesn’t offer Mike’s favorite dessert— funfetti cakes!)

As The Ashley told you earlier this week, Mike’s release comes after an eight-month sentence for tax evasion crimes. Shortly after his release, Mike excitedly proclaimed on Twitter that he was a free man again.

He also shared a photo of himself “living [his] best life” with his wife Lauren(s) and their dog.

Living my best life with my beautiful wife @lauren_sorrentino 🐾 @themoseyworld

Lauren, who tied the knot with Mike back in November, also got in on the prison-release fun, sharing a Jon Snow GIF on Twitter, declaring that her “watch has ended.”

Mike’s ‘Jersey Shore’ co-star Nicole “Snooki” Polizzi gave Mike a shout out on her Instagram Story, and on Twitter. Jenni “JWOWW” Farley, another one of Mike’s roommates, shared a photo of the whole cast, declaring, “The fam is back together, such a happy #jerzday.”

The fam is back together 🙌🏽❤️ such a happy #jerzday 🤗 tune in to the new episode of #JSFamilyVacation TONIGHT at 8/7c!

Mike also some love from SallyAnn Salsano of 495 Productions, the company behind ‘Jersey Shore.’

“Damn, we all missed you,” she tweeted. The official ‘Jersey Shore Family Vacation’ Twitter pack even changed their handle to “Welcome home, Mike!” in honor of Sitch’s release. 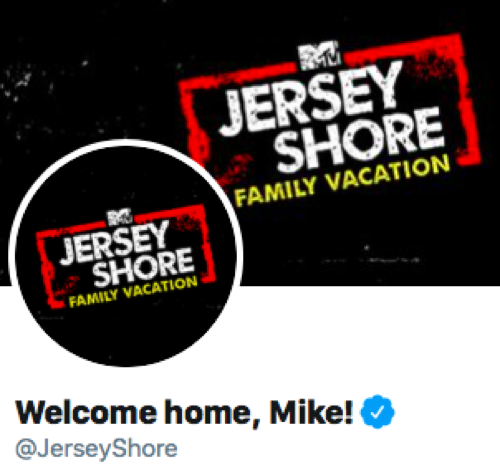 Now that Mike is out of the Big House, he and Lauren are going to focus on making their own house a little bigger.

“We are elated to finally close this chapter of our life,” the couple told TMZ. “Thank you to our family, friend and fans for the continuous love and support during this time, it brought us so much peace and comfort. … We look forward to continuing our life as husband and wife and working on baby situations!”