According to TMZ, Jenni has allegedly ended things with her 24-year-old boyfriend Zack Clayton Carpinello after it was revealed on Thursday nights’ episode that he had gotten a little too close to Jenni’s roommate Angelina Pivarnick. Zack was accused of putting his arm around Angelina’s waist at a Las Vegas club, putting his hand on her leg and possibly touching her butt.

Jenni took to Instagram after the episode aired, telling her followers she was “pretty hurt” and that she felt “disrespected” by someone she believed to be a friend and by another who claimed they loved her. 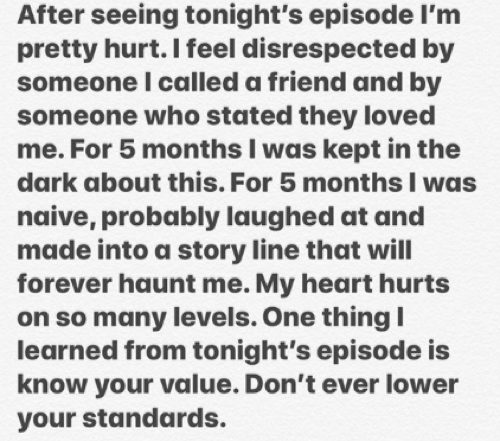 Before the episode aired, Angelina reposted a video teasing the drama to come between herself and Jenni this season, encouraging her followers to “all be judges for yourselves.”

Earlier on Thursday’s episode, according to People, Zack was seen grilling Angelina about the details of her sex life, which didn’t sit well with Angelina, who is currently engaged to Chris Larangeira.

My lover @chris_e_piss_e .. what would I do without you. I cannot wait to marry u ❤️ #marryingchrissypissy #forevermybaby

“I just met you, 24, and you’re literally grilling me about my relationship with Chris,” she told producers in an interview. “Like, bro. This kid is 24 years old, he knows nothing about relationships. He’s probably been in non in his entire life. And another thing, too, he doesn’t know me. So what the f*ck is he doing? He’s such a weirdo.”

Angelina eventually directed her frustrations at the source.

“Why are you riding me about these things and you’ve only known me for 20 minutes,” she asked Zack. “From now on, my sex life is none of anyone’s business and what happens in my sex life is off-limits.”

Angelina took to Twitter as the episode aired, reiterating that Zack’s prying was “not cool,” however, Jenni soon fired back, arguing otherwise.

“Ummm you told zack about your sex life via FaceTime when we were with Lauren’s in Vegas… and also how you can’t stand Chris because he doesn’t pay attention to anything you say but I’ll save that for another day Angelina,” Jenni wrote.

Ummm you told zack about your sex life via FaceTime when we were with Lauren’s in Vegas… and also how you can’t stand Chris because he doesn’t pay attention to anything you say 🧐 but I’ll save that for another day Angelina https://t.co/wvtAPMcdlc

In the wake of this week’s drama, Jenni’s ex-husband Roger Mathews surprisingly had some well wishes for his ex in her currently relationship.

“I want peace with my ex-wife for my kids and if there is turmoil in her life an din her household, it’s just not a good thing for our children, so I wish nothing but the best for her,” he told Us Weekly. “I wish them all well and I hope Jenni and Zack can work through their issues if they deem it worth saving. I’m focusing on myself and my children. Onwards and upwards.”

UPDATE! Zack has publicly apologized to both Jenni and Angelina. Click here to read what he wrote!