As nationwide protests continue over the death of George Floyd, former reality TV star Farrah Abraham has found a way to express her feelings against— and then her support for— the Black Lives Matter movement, all while making it about herself and offending (and confusing) the masses.

On Monday, Farrah took to Instagram to share a series of videos she filmed of people looting a CVS on Hollywood Blvd., across the street from her apartment. During the video, Farrah gave viewers a play-by-play of what was going on, as her daughter Sophia (who could be heard in the background) watched along with her.

In one video posted by Farrah, she filmed and screamed at looters who were across the street. In true Farrah form, she posted this video to Instagram with a caption applauding herself in her trusty “Farrah Speak” format. (The Ashley has left Farrah’s caption intact to preserve all the Farrah Speak goodness!)

“I’m thankful I use my voice for justice, I call the police, I record and turn into police & with over 20 people in jail & 3 cars turned in I’m blessed there’s people like me on this earth who care for store owners, working people,” she wrote. “Safety! In one nation with liberty and justice for all! Lives matter, so stop turning death into stealing, criminal distractions and start caring for your life & others who wrongfully die each day! Be a hero not about petty crime, not about cyber crime, not about hurting innocent people! STOP IT NOW! I pray one day our children never have to deal with this!”

(Just for the record, this is how Farrah recently treated one of those so-called “working people” she supposedly cares for…)

Farrah’s critics were quick to call her out for the caption on her post, specifically the part about her being thankful and blessed for herself.

“Don’t flatter yourself too much,” one person wrote. “You’re not that important.” 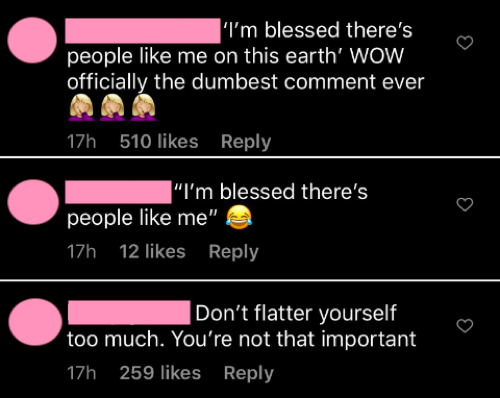 Others pointed out Farrah’s error in sharing her place of residence on social media.

“So you realize, you just released your location right,” one person wrote. “Not smart.”

“Thanks for letting us know you’re in the complex across the street, be there shortly,” another commented. 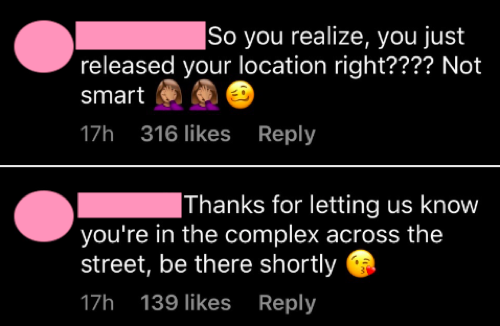 Farrah then screamed from her balcony at looters, protesters and the police officers that she was filming all of this  and would be making sure everyone involved went to jail.

“Criminals I’ve had enough,” she wrote. “For those businesses who are struggling – for those companies & people who need jobs – I hope you know this is wasting time progressing – ENJOY JAIL – for petty crimes. STOP THE CRIMES IT’S WRONG!”

Criminals I’ve had enough – For those businesses who are struggling – for those companies & people who need jobs – I hope you know this is wasting time progressing – ENJOY JAIL – for petty crimes. STOP THE CRIMES IT’S WRONG!!!!!!!!!!!

After receiving some backlash for the post, Farrah chimed in to let her followers know she stands united “with those not breaking the law.” She then went on a rant about cyber hate and cyber bullying….although it wasn’t exactly clear as to who she was aiming the “Farrah Speak” words toward.

“For all those who want to twist the truth! Twist the focus,” she wrote. “Your denial is not welcome on this earth nor on my page – cyber hate – cyber bullying is also a crime – get some help and stick to what this is about a better community for everyone! Stop hating people! Stop crime! Save lives you sicko’s!” 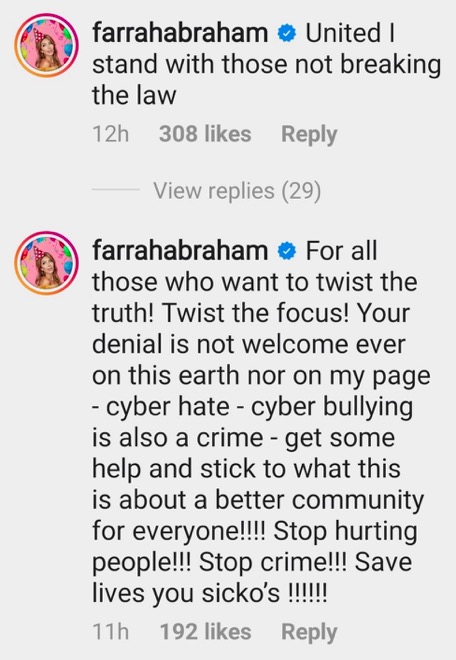 She also declared she “WILL NEVER STOP DOING THE RIGHT THING” and warned those threatening her supporters, before once again mentioning “cyber criminal activity.”

“DON’T THREATEN MY SUPPORTERS OR ANYONE WHO CARES FOR OTHERS AND OUR WORLD,” she wrote. “STOP CYBER CRIMINAL ACTIVITY! BE A HERO- BE A LEADER- CARE FOR OTHERS! BE KIND IT’S FREE!!!!” 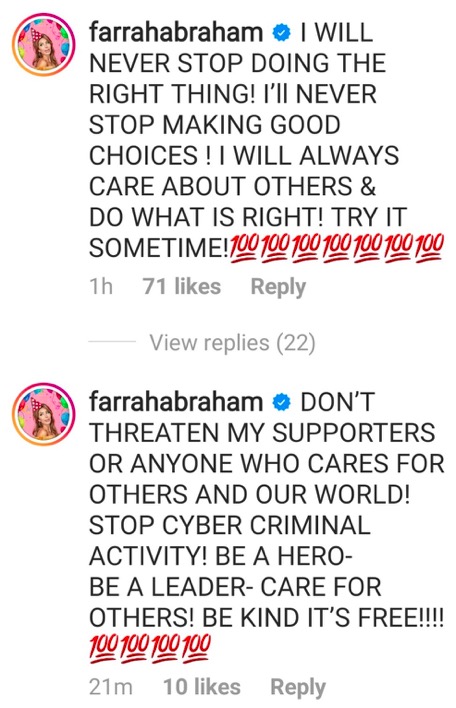 Farrah went on to share a video of the peaceful protests taking place today near her home, encouraging others to “support & stop racism, stop crime, stop hate!”

(We’re not sure how you can both support racism and stop racism, but…perhaps it’s possible in The Brain ‘o’ Farrah?)

A number of comments on Farrah’s post asked that she instead her platform to speak more about the reason behind these protests. As some pointed out, Farrah actually did over the weekend when she posted a video featuring Philonise Floyd, brother of George Floyd, in which she expressed her support of the Black Lives Matter movement in her caption.

Still, this effort resulted in plenty of backlash for the former ‘Teen Mom’, as critics called her out for her own racist past, some of which was exposed back in 2017 during Marriage Boot Camp: Family Edition. For those unfamiliar with the incident, Farrah got into a heated argument with fAfrican-American cast member Paula Johnson, the mother of NFL player Chad “Ochocinco” Johnson. During one of their many arguments, Farrah called Paula a “disgusting, black piece of s**t.”

In a Twitter rant soon after, Farrah went on to call Chad “the stereotypical African American” (whatever that means?)

The former ‘Teen Mom OG’ star has received plenty of reminders of the incidents on social media in response to her post supporting Black Lives Matter, with many calling her a hypocrite. 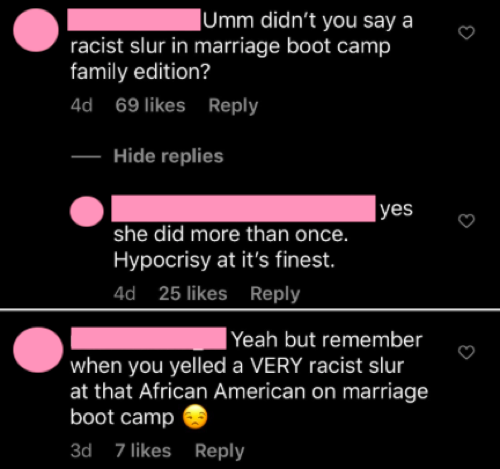 The ‘MBC’ incident was not the first time Farrah has been called a racist due to her words or actions. In April 2016, Farrah used a racial slur against Blac Chyna, calling her a “f**king monkey” in an Instagram comment. In September of that year, she stated during a podcast interview that she is not really into dating black men because “that’s more of a Kardashian thing…God bless them.”

Throughout the week, Farrah has continued to post confusing anti-racism messages to Instagram (some of which have racist undertones).

On Tuesday, she posted a video of a peaceful protest happening on Hollywood Blvd, writing in the caption that, “WE WANT PEACE #blackouttuesday Support & stop racism, stop crime, stop hate ! We want peace ✌️ this is now… No one wants crime everyone wants peace.”

People were quick to let her know if the comment section that she didn’t quite understand what the #BlackoutTuesday and BLM movement is about.

“Support & stop racism? Huh? Am i the only one who’s confused?” someone commented.

“WRONG! EVERYONE WANTS JUSTICE,” one person wrote. “NO JUSTICE NO PEACE. I KNOW THAT’S HARD FOR YOU TO UNDERSTAND BUT DISSECT THAT PHRASE. THEN MAYBE YOU WILL UNDERSTAND IT.”

“Oh now you wanna be all BLM but you were just crying and snitching yesterday,” another responded.

Farrah has denied being a racist; however, in a 2018 YouTube video, she did address the topic, blaming her upbringing for how she is.

“I grew up with a hateful aura in my family, and [they were] a little bit racist,” Farrah said. “I couldn’t be friends with certain people. I don’t know why that bothered me so much.”

Farrah is just one of the ‘Teen Mom’ cast members who has taken heat for the way she responded (or didn’t respond) to the George Floyd murder and the subsequent protests and riots. Former Teen Mom 2 star Jenelle Evans was also recently called out for being a racist, due to her lack of response to the BLM movement and her husband David Eason‘s racist history. On Tuesday, she posted a video to Instagram demanding people stop calling her a racist.

RELATED STORY: Fans of ‘The Hills’ Demand Stephanie Pratt Be Fired For Her “Shoot the Looters” Tweet; Call Her Out For Her Own 2006 Shoplifting Arrest