A day after Tamar Braxton’s boyfriend David Adefeso filed a restraining order against her, the Braxton Family Values star is responding with a story claiming that David assaulted her and threatened to kill her in a murder-suicide.

The Blast reports that the now-former couple got into an argument while driving to a mental health facility to check Tamar in for treatment. A source told the site that during the drive, Tamar questioned David about a recent Instagram video he posted featuring her seven-year-old son, Logan. 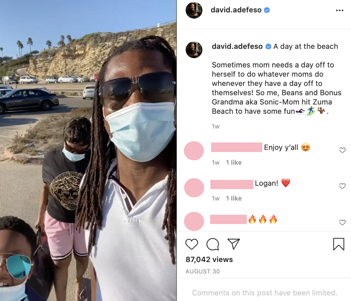 Tamar allegedly told David he was “around for the wrong reasons and could not be trusted,” at which point David became “irate, threatening not only [Tamar’s] life but his own.” Tamar claimed David said they were going to end up in a “murder-suicide.”

The argument then turned violent as David reportedly “grabbed [Tamar] hard” on the arms and caused bruising. Tamar claimed she only grabbed David after he became physical with her.

When filing for his restraining order against Tamar on Tuesday, David asked that the order be granted to “prevent domestic violence” against him. At the time, there were no additional details.

Just last month, Tamar credited David for saving her life after he found her unresponsive following a possible suicide attempt.

First and foremost, Thank you. Thank you to each and every individual who has prayed for me, thought of me, sent me their love and has showered me with their support. In this present moment, it is my only responsibility to be real with myself and to be real with the ones who truly love me and care for my healing. I have without fail, shared with you my brightest days, and I know that sharing with you what has been my darkest will be the light for any man or woman who is feeling the same defeat I felt just only a week ago.  Every one of us has a desire, whether small or big, to make it out of where we come from to an ideal future place that includes, freedom to be who we choose, security for our children and families, and fortune to share with the ones we love. We believe these things can co-exist with just being happy. I believed that, that as a black woman, as an artist, an influence, a personality I could shape my world, and with whom I believed to be my partners, they could help me share my world. Over the past 11 years there were promises made to protect and portray my story, with the authenticity and honesty I gave. I was betrayed, taken advantage of, overworked, and underpaid. I wrote a letter over 2 months ago asking to be freed from what I believed was excessive and unfair. I explained in personal detail the demise I was experiencing. My cry for help went totally ignored. However the demands persisted. It was my spirit, and my soul that was tainted the most. There are a few things I count on most to be, a good mother, a good daughter, a good partner, a good sister, and a good person. Who I was, begun to mean little to nothing, because it would only be how I was portrayed on television that would matter. It was witnessing the slow death of the woman I became, that discouraged my will to fight. I felt like I was no longer living, I was existing for the purpose of a corporations gain and ratings, and that killed me. Mental illness is real. We have to normalize acknowledging it and stop associating it with shame and humiliation. The pain that I have experienced over the past 11 years has slowly ate away at my spirit and my mental. (Swipe to finish )

Soon after Tamar’s hospitalization, it was revealed that David had gone into detail about Tamar’s battle with WEtv during the 911 call on the night of the incident. In the audio clip obtained by TMZ, David told the 911 operator that Tamar was “very angry early on” and that she has “had trouble with the network.”

Despite having since cut ties with Tamar, WEtv indicated it still plans to air her new show, Tamar Braxton: Get Ya Life, later this month.