Cameran Eubanks announced her departure from Southern Charm this summer, however, Kathryn Dennis was apparently not ready to say goodbye .

Cameran revealed in May that she was leaving the show after six seasons and later that week, she addressed allegations that her husband, Jason Wimberly, had an affair – a rumor she vehemently denied. On Thursday’s season premiere, viewers saw Kathryn share the rumor with Craig Conover, who insisted it wasn’t true, Us Weekly reports.

Azaleas are in full bloom in Charleston and also make great sunning spots for Cottonmouths 🐍. (These are mean and poisonous) My Mom almost walked right into our friend in the next pic and Jason had to jerk her so hard she almost fell down. (And hell no I didn’t take the pic, Jason was the brave one.)

Later in the episode, Craig revealed to ‘Southern Charm’ newcomer Leva Bonaparte what Kathryn had told him and she, too, said there was no truth to the rumor.

Still, word quickly got back to Cameran (off-camera, of course) who reached out to Kathryn via text to ask why she was telling people that Jason was cheating on her.

While reading the text exchange between herself and Cameran, Kathryn claimed that the rumors of Jason’s infidelity had been “going around.” In response to the allegation, Cameran texted back, “Kathryn, give me a break, be a good human.”

Kathryn went on to throw some insults at her former co-star, stating in her confessional that she didn’t “give a f**K about what Cameran thinks.”

“She literally hurt me to my core by the meanest, nastiest things you could ever say about someone,” she continued. “So everyone that thinks Cam is just this guy’s girl that is wearing Lilly Pulitzer with a big old smile and perfect teeth – she’s an a**hole.”

Kathryn was previously blamed for spreading the rumors about Cameran’s husband in May. At the time, Charleston make-up artist Rebecca Leigh Wash denied having an affair with Jason, claiming that there were “allegations that this rumor was started by Kathryn Dennis,” who Rebecca said she had only met once in 2018.

Cameran went on to repost Rebecca’s message, calling it “so sad” that the makeup artist “had to be drug into the mud.” 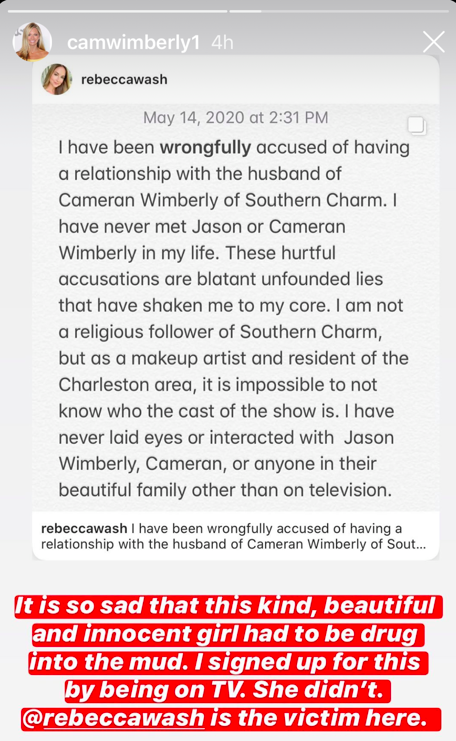 “I signed up for this by being on TV,” Cameran added. “She didn’t. [Rebecca] is the victim here.”

Though Cameran has stepped away from the show, Craig told Us Weekly he still believes he may be able to talk his friend into making a return.

“I know that she enjoyed doing it with us, you know, me and her and Shep [Rose] had been together since the beginning,” he said. “ … I have a sneaky feeling that I would be able to get her back next year, but we’ll see what happens.”

RELATED STORY: Thomas Ravenel Reveals He Filmed a Scene with Kathryn Dennis for ‘Southern Charm’ Season 7: Says It Was Done “As a Favor to Kathryn”