Madison Everhart and Korey Wiseman of 16 and Pregnant Season 6 are expecting their second child together.

Maddie shared the news Wednesday on social media by posting a photo of a positive pregnancy test and ultrasound images.

The couple— whose episode aired in October 2020 as part of the reboot of the show—are already parents to daughter Kaezleigh Ka’mya, who was born in February 2020. 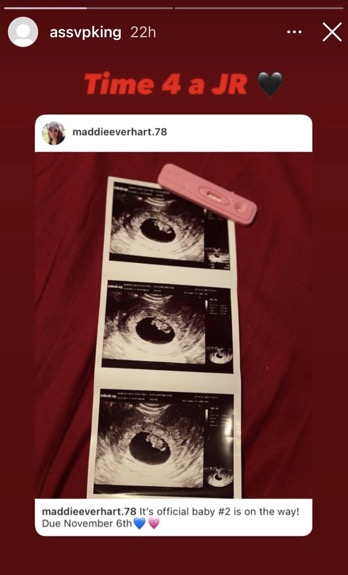 Maddie and Korey got engaged in December 2019 while Maddie was pregnant with Kaezleigh.

(As The Ashley previously reported, Maddie and fellow Season 6 cast member Rachelle Perez were being filmed for “16 and Pregnant” before the pandemic hit and production on the show was shut down. Rather than replacing the two girls, the producers chose to keep the two on the show, which is why their daughters are older than the rest of the Season 6 babies.)

Maddie confirmed to one of her Instagram followers that her second pregnancy was “a surprise,” which some fans may have assumed, given that Maddie allegedly mentioned previously that she didn’t want any more kids, and the fact that she and Korey were recently broken up and she has been living with her mom.

Maddie and Korey have since worked things out and Maddie told fans last week on Instagram Live that she and Kaezleigh may be moving back in with Korey.

Maddie received plenty of congratulatory messages from her “16&P” castmates.

RELATED STORY: Where Are They Now? “16 and Pregnant” Season 6B Stars Selena Gutierrez & Shelby Stults Give Updates on Their Lives Today as Teen Moms