After suffering a spinal cord stroke over a month ago, Patricia Altschul’s butler of nearly two decades, Michael Kelcourse, (aka Michael the Butler) is reportedly “progressing rapidly.”

The Southern Charm matriarch shared the positive update this week on Twitter, while confirming that Michael is still receiving care at the Shepherd Center in Atlanta, Georgia.

Thank you for asking…of course I miss him as do the dogs and his cat. We’re not allowed to visit him at the Shepherd Center because of Covid but we’re in touch all the time and I talk to his doctors frequently. Because he’s so smart and self motivated he is progressing rapidly. https://t.co/sNyYvvHwih

“ … of course I miss him, as do the dogs and his cat,” Patricia wrote on Twitter. “We’re not allowed to visit him at the Shepherd Center because of Covid but we’re in touch all the time and I talk to his doctors frequently. Because he’s so smart and self-motivated he is progressing rapidly.”

Patricia’s son and fellow ’Southern Charm’ star Whitney Sudler-Smith confirmed Michael’s condition in February, explaining that Michael had “suffered an acute spinal cord infraction, which is often called a ‘spinal cord stroke.’” At the time, Whitney said although the spinal cord stroke had caused “significant nerve damage and impairment,” they were hopeful that Michael would soon recover “with the help of the outstanding physicians at the Shepherd Center.”

In addition to her recent Twitter update, Patricia took to Instagram this week to thank those who have reached out to her beloved friend and butler, either by mail or through the CaringBridge page that was shared with fans last month.

“I want to personally thank all of you who have sent Michael Kelcourse cards and letter but also to the many who follow his progress on @caringbridgeofficial and send him messages there,” she wrote. “He reads and appreciates every one.”

Michael’s CaringBridge page allows fans to not only send well wishes his way, but also find out the latest news on his recovery journey. During his time at the Shepherd Center, Michael has taken part in the Center’s pet therapy program and more recently, a cooking class where “residents learn about adaptive tools and tricks to make cooking easier.” 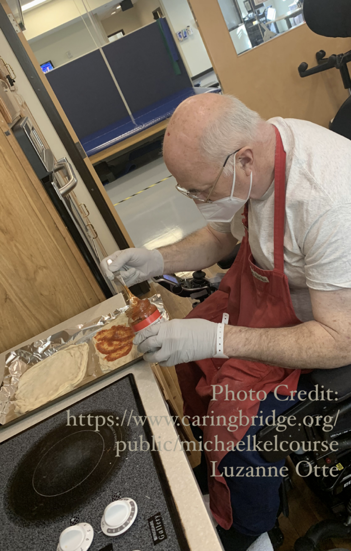 “As the cook in residence, Michael offered to give lessons on how to make delicious, easy meals,” a recent entry from Luzanne Otte reads. “Thanks be to God, Michael’s manual dexterity and arm mobility were not significantly compromised by the stroke. I particularly enjoyed Michael’s costume for the day, his signature red apron by William-Sonoma.”