Derick Dillard is once again speaking out about the Duggar Family after his disgraced brother-in-law Josh Duggar was arrested and charged last week with receiving and possessing child p0rnography.

Derick and wife Jill have been feuding with (most of) the Duggars for a few years now, beginning when Derick claimed that Jill’s dad, Jim Bob Duggar, kept the profits from the family’s TV shows (Counting On and 19 Kids and Counting) for himself, among other unsavory alleged actions.

In a series of tweets posted on Sunday, Derick made some more accusations against TLC and the Duggars, bashing how the network handled Josh’s 2015 scandal (when it was exposed that Josh molested Jill, three of her sisters and another young girl).

Derick also insinuated that some of Jill’s siblings may be looking to follow Jill and Derick’s leave and quit ‘Counting On’ for good.

Derick and Jill left ‘Counting On’ in 2017, but Derick still condemned the way TLC handled Josh’s scandal. He also spilled a bit of behind-the-scenes tea from that time period.

“How do you know how it was handled? It was not handled well,” Derick responded. “The public was deceived. Their plan worked. And we were told to keep filming and keep our mouths shut. We called their bluff and left.”

Derick, who said TLC referred to ‘Counting On’ as “a rebranding” of “19 Kids and Counting,” went on to claim there may be other members of the Duggar family trying to leave the show as well.

“How do you know they’re not trying to leave?” he wrote. “They didn’t know what we knew when when knew it. As I’ve said before, we were told to not talk to the others about what we learned. And based on our history, I don’t know what scare tactics are used on the others to keep them compliant.” 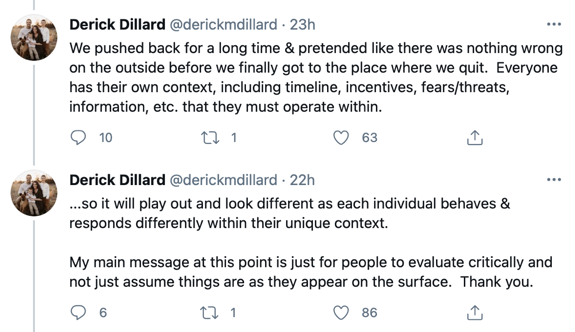 Derick said he and Jill “pushed back for a long time and pretended like there was nothing wrong on the outside” before finally deciding to quit. He added that everyone will handle the situation differently.

“ … so it will play out and look different as each individual behaves & responds differently within their unique context,” Derick wrote. “My main message at this point is just for people to evaluate critically and not just assume things are as they appear on the surface. Thank you.”