TLC made it clear that it is no longer associated with Josh Duggar, but the network’s lackluster statement has at least one other former TLC star angry and calling out the network’s habit of distancing itself from shows and talents when things go bad.

Over the weekend, the network released a statement regarding the arrest of Josh, who used to star on his family’s TLC reality show 19 Kids and Counting… until one of his previous scandals got the show cancelled back in 2015.

In the statement, TLC made sure to let viewers know that the network distanced itself from Josh long before his arrest last week.

(As The Ashley previously reported, Josh is now facing charges of possessing and receiving child p0rnography, and has been behind bars in Arkansas since Thursday, when he was arrested by the U.S. Marshals.)

“TLC is saddened to learn about the continued troubles involving Josh Duggar,” the network stated. “’19 Kids and Counting’ has not aired since 2015. TLC canceled the show on the heels of prior allegations against Josh Duggar and he has not appeared on air since then.”

While Josh’s siblings, parents, wife Anna and children have all appeared on the Duggar Family’s new TLC show, Counting On, Josh never made an appearance. (In fact, he was blocked or blurred out during several of the wedding episodes. Although he attended his siblings’ weddings, TLC made sure that Josh’s mug did not appear in the crowd.)

One person who was particularly underwhelmed by TLC’s statement is Jacob, who told his Instagram followers that the network’s statement “completely sidesteps” the real issues.

“(Unfortunately) RE: Duggars. TLC’s statement of essentially, ‘He hasn’t been on air in a while,’ completely sidesteps the dynamic of being able to air terrible people with sometimes terrible producers for often terrible motives for beaucoup ratings and profit. (And still profiting.),” Jacob wrote.

“But, when the ‘terrible’ of all that gets uncovered, TLC walks away with the beaucoup profits and… nothing else (Maybe a twin spin-off),” he added. 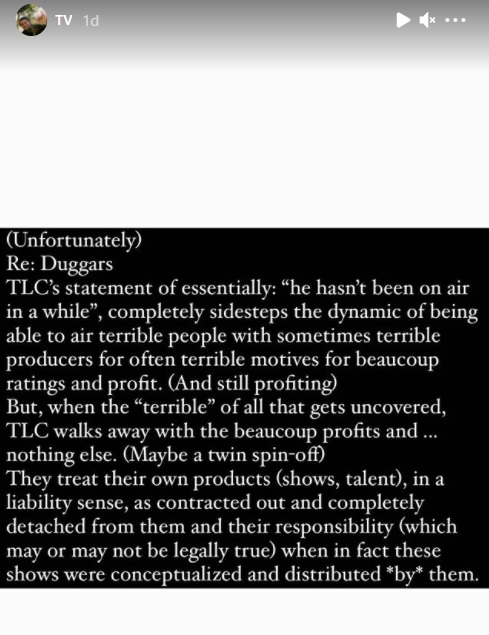 Jacob claimed that TLC wants the profits that their shows and stars make for them, but not the obligation to stand behind them should things go astray.

“They treat their own products (shows, talent) in a liability sense, as contracted out and completely detached from them and their responsibility (which may or may not be legally true) when in fact these shows were conceptualized and distributed by them,” he wrote.

He also reposted a clip of an article that encouraged TLC to distance itself from the Duggars, stating that “as it stands now, the network is essentially bankrolling a cult.” (Jacob commented that he completely agrees with this statement from the article.) 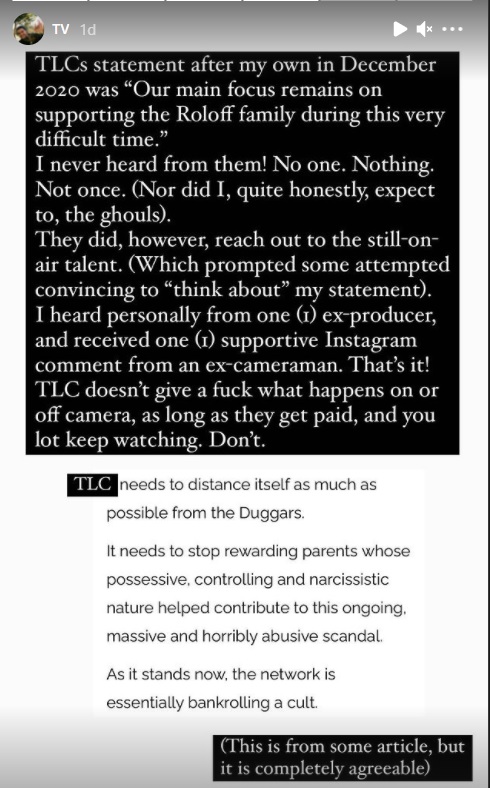 Back in December, Jacob revealed that he was allegedly groomed and molested as a child by a ‘Little People, Big World’ third-party producer. After Jacob wrote about his experience on Instagram, TLC issued a statement, saying it was “saddened and troubled by this very serious allegation” and that its “main focus remains on supporting the Roloff family during this very difficult time.”

According to Jacob, though, no one from TLC ever even reached out to him.

“TLC’s own statement after my own in December 2020 was ‘Our main focus remains on supporting the Roloff family during this very difficult time’. I never heard from them! No one. Nothing. Not once (Nor did I, quite honestly, expect to, the ghouls),” he wrote, adding that they did reach out to the members of his family that are still on the show.

“I heard personally from one ex-producers and received one supportive Instagram comment from an ex-cameraman. That’s it!” Jacob wrote. “TLC doesn’t give a f**k what happens on or off camera, as long as they get paid, and you lot keep watching. Don’t.”

He later added that he does not agree with “family-centered” reality shows (such as ‘Little People, Big World’ or “19 Kids and Counting.”) 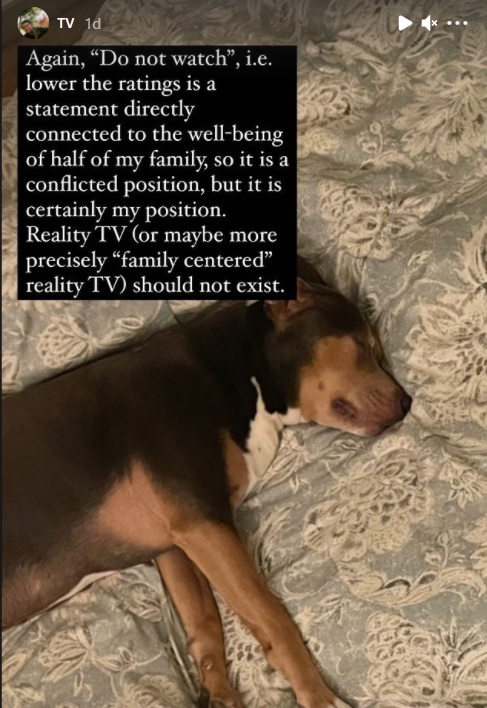 Some members of the Duggar Family have spoken out on Josh’s arrest and charges, with Jinger and Jeremy Vuolo, as well as Jessa and Ben Seewald, releasing statements that condemn Josh’s actions. (Jinger and Jeremy made it very clear that they are not Team Josh.)

“We are disturbed to hear of the charges against Josh,” the Vuolos’ statement read. “While this case must go through the legal system we absolutely condemn any form of child abuse and fully support the authorities and judicial process in their pursuit of justice.”

“We are saddened to hear of the charges against Josh,” the Seewalds’ statement read. “As Christians, we stand against any form of p0rnography or abuse and we desire for the truth to be exposed, whatever that may be. Our prayers are with their family as they walk through this difficult time.”

Josh’s sister Jill Dillard was sympathetic toward Anna and her kids in her statement regarding Josh.

“We’re very sad about the whole thing, it’s horrible. It’s all very sad,” she said, adding, “Josh’s wife Anna is pregnant with their seventh child, I cannot imagine how she is feeling.”

Jill’s husband Derick Dillard (who is hardly a fan of the Duggar Clan), told The Sun that, while he feels for Anna, he hopes Josh pays for his alleged crimes, if convicted.

“Obviously if there is anything there related to child p0rnography, we hope that justice is done,” Derick said. “I don’t think anybody supports child p0rnography. We’re sad for Anna. Put yourself in her situation and imagine how you would feel if that happened with your family member. I imagine it would be really hard.”

(Derick also had some less-than-nice things to say about TLC. Click here to see his latest tweets about the network!)

The rest of Josh’s other siblings have yet to speak out on Josh’s arrest and alleged crimes. His wife Anna and her family have also remained publicly silent since the events of Thursday.

Josh has pleaded not guilty to his charges, but will remain behind bars until at least May 5, when he may be eligible to be released on bond. His trial is due to begin July 6.

RELATED STORY: Derick Dillard Speaks Out After Brother-In-Law Josh Duggar’s Arrest; Implies Other Duggar Family Members May Be Trying to Leave ‘Counting On’