From calling their baby daddy an insect to calling their drunk dad while drunk, the stars of the Teen Mom franchise (both past and present) have been keeping themselves busy lately!

When you’re co-parenting with anyone on a ‘Teen Mom’ show, things are almost guaranteed to get messier than Leah Messer’s car!

Chris— who shares two sons with ‘Teen Mom 2’ star Kail Lowry— hit up Instagram Live over the weekend to give his thoughts on the latest ‘Teen Mom’ Co-Parenting Saga, which happened last week when Kail teamed up with her ex-husband Javi, to shred Javi’s other baby mama, Lauren, on social media after Javi claimed she attacked him. (You can read all about that incident here!)

During his Instagram Live session, Chris answered fan questions, including one in which someone asked if he feels bad for Lauren over what happened between her, Javi and Kail.

“Do I feel bad for Lauren? I’m not even going to lie, I actually do. That s**t’s corny but that ain’t my business…what people are doing, that s**t corny.”

Chris seemed to be carefully choosing his words, though, and at least semi-trying to stay out of the latest wave of drama.

He then talked about how he has no desire to get together again with Kail, and said he’s tired of riding the Merry-Go-Round ‘o’ Drama that has been their lives for the past few years.

“I’m not worried about getting back with nobody,” Chris said. “I’m happy with all the relationships I got in my life right now…I spent enough time worrying about things I can’t control, stressing about things that already happen, being bothered by the petty actions of other people…”

Chris’ Instagram Live session came before Kail seemingly compared him to a cockroach.

(The Ashley seriously can’t make this crap up…)

Kail— who had been on vacation in the Dominican Republic— complained that a house she rented there was infested with cockroaches. When a fan asked Kail about it during an Instagram Q&A session on Sunday, she used the opportunity to throw some shade Chris’ way. (We can assume it was Chris she was talking about, as she is currently on good terms with her other two baby daddies, Jo Rivera and Javi.)

“What happened at the Airbnb?” someone asked Kail.

“It seemed as though one of my baby’s fathers showed up so we got up outta there,” Kail captioned a photo showing a giant cockroach on the floor. 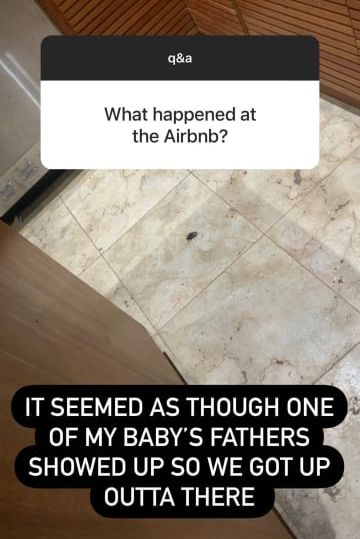 Naturally, fans immediately hopped onto Chris’ Instagram Q&A session to get his thoughts on (seemingly) being called a cockroach by Kail.

“I stopped caring about what anyone says about me at this point,” he wrote. “It’s a cycle. Couple weeks ago [it was a] totally different story. ‘Getting along’ with other ppl now it’s fck me,” he wrote.

He also confirmed that, contrary to what Kail seemingly claimed, he was not actually scampering around the kitchen of Kail’s Airbnb.

“I been in Delaware,” he wrote. 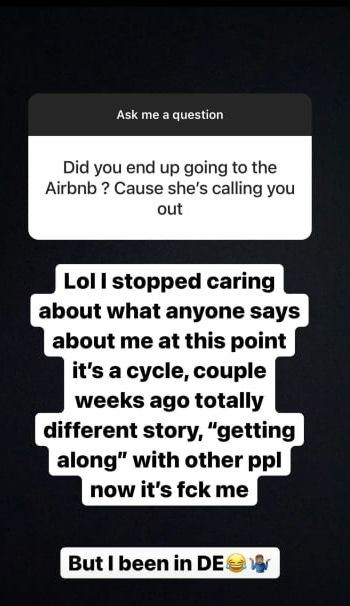 During the Instagram Live session, someone suggested that Chris try to work out his differences with Kail, but Chris stated that wasn’t a good idea.

“The last time I tried to reach out [about something] other than the kids, it ended up backfiring on me,” he said. “That’s a topic for a different day.”

When someone asked Chris for co-parenting advice (which is honestly like asking David Eason for advice on how to get a job), even Chris admitted he was probably the wrong person to ask.

“How do I co-parent? I wouldn’t call what I do co-parenting so I cant speak on co-parenting,” he said, adding that he obeys Kail’s wishes. “I do what the person tells me, don’t speak to them unless it’s about the kids.”

One of Jenelle Evans’ former soulmates got arrested.

One of Jenelle’s (many) former fiancés found himself behind bars this weekend…and, surprisingly, it’s not Kieffer Delp!

Gary Head, who was engaged to the former ‘Teen Mom 2’ star back in 2012—was arrested in North Carolina on July 24 for carrying a concealed gun and failing to comply with licensing restrictions. He is no longer sitting in the clink, though, as it appears he was able to secure bond and get out.

In case you aren’t familiar with all of Jenelle’s former soulmates/fiancés, allow The Ashley to refresh you. Gary was the fiancé that came in the middle of Kieffer Sandwich, with Jenelle dating Gary after breaking up with The Kieff, and then picking up with Kieffer after she and Gary broke up.

Longtime ‘Teen Mom 2’ viewers will remember Gary as the military guy who started dating Jenelle and, within a few months, ended up getting matching mugshots they got into a physical fight and Jenelle claimed he strangled her with a bed sheet…or something. (I mean…if you didn’t end up getting matchy mugshots with Jenelle, did you guys really even date?!)

Gary appeared on the appeared on the 2017 ‘Teen Mom’ “Ex Files” special, in which several of Jenelle’s former soulmates were gathered to discuss their relationship with the ‘Teen Mom 2′ star.  He was last heard from in the ‘Teen Mom’ World in 2019, when he tweeted that he was urgently trying to get in touch with Jenelle. Although Gary insisted that it had nothing to do with trying to get a pickle tickle from Jenelle, her husband, David Eason, still basically threatened Gary’s life, hinting that he would break his neck if he tried to contact Jenelle.

Wanna see Gary’s latest mugshot? Of course you do!

Jenelle Evans reveals she once drunk-dialed her estranged father.

Former ‘Teen Mom 2’ star Jenelle Evans has been known to throw back a few cold ones on The Land, but those swamp brews once led her to use her cellphone for something other than filming TikTok videos.

Jenelle revealed on the debut episode of The Jenelle Evans Podcast that after having “some drinks,” she and husband David Eason attempted to call her dad, from whom she’s estranged.

During the podcast, Jenelle explained that she lost touch with her dad when she and her mother Barbara moved to North Carolina more than 20 years ago. (Jenelle’s parents had been divorced for years before the move, having split when she was three or four years old.)

While Jenelle was able to reach her dad that night, he coincidently “seemed really drunk,” so she hung up the phone.

Interestingly, Jenelle said she and David were still filming ‘Teen Mom 2’ when this daddy-drunk-dial occurred, though she didn’t tell the show’s producers about it or that she had been thinking about reconnecting with her father because she didn’t want the story to play out on the show.

“I was afraid they were gonna throw me into the situation of, ‘Oh, you’re gonna meet your dad. Let’s film it for the first time,’” she said. “And I’m sitting here like, ‘I want to do this on my own without anybody around and I need to do this on my own personal private time.’”

Jenelle added she was “actually kind of scared for once to tell MTV that I contacted my dad,” given her rocky relationship with Barbara, which was nearly a constant storyline throughout her MTV career.

As to why her parents split back in the day, Jenelle claimed her father’s alcohol abuse was a factor, though she still doesn’t know why he “ended up leaving.”

“I just know my mom talked about a lot of him drinking and I guess he had an addiction to cocaine, from what I hear,” she said.

In March, Jenelle admitted she was jealous of David’s relationship with his dad and admitted in a TikTok video that “the weirdest part is growing up without a dad.” She also said it makes her upset that her dad doesn’t want to be involved in her children’s lives.

Tyler recently took a break from designing velvet children’s clothing to appear in his friend’s rap music video. (Sadly, the rap superstar featured in the video is not Jo Rivera…sigh.)

Anyway, Tyler appears in the latest video from rapper Sik World. The ‘Teen Mom OG’ star has frequently plugged his pal’s rap music, but in the video for “They Don’t Even Know,” Tyler appears as an overly eager party-goer who is mad that his friend, Sik, is leaving early. The scene contains some pretty cringe-worthy acting from both him and Sik.

Later in the video, Tyler is worried about his pal, so he calls him to check to see if he’s OK, after leaving the “sik” party early. (Sik doesn’t answer the calls, though, because he’s too busy rapping on a mountain/stressing out in a gas station parking lot.)

Sik thanked Tyler on Facebook for appearing in the video.

“Shoutout to my brother Tyler for being in my new music video “they don’t even know” I’m hella honored to call this guy my best friend. it took us over an hour to film the intro because of how much we kept laughing.

You can watch the music video below!