Maci Bookout has been nominated for several awards, recognizing her advocacy of Polycystic Ovarian Syndrome (PCOS), though the nomination has some critics calling the Teen Mom OG star out for her insensitive social media behavior.

On Thursday, Maci shared on Instagram that she had been nominated for the 10th annual WEGO Health Awards. She went on to provide a link where her followers could learn more about her advocacy, “endorse” her in one of the 10 categories she’s been nominated, or even nominate her for additional categories.

“ … I would be humbled to receive a nomination and/or an endorsement from you,” she wrote. “Nominations and Endorsements are ONLY OPEN UNTIL JULY 31st … so please visit my page now and help your girl out!”

Maci’s bio on the WEGO Health page describes the mom of three as a “devoted PCOS & Women’s Health Advocate.” (As ‘Teen Mom’ fans know, Maci has spoken openly for years about PCOS, having been diagnosed with the disorder herself.) Maci’s bio goes on claim that for more than a decade, she has “used her publicity through television and social media to empower & encourage those living with PCOS to be prevalent through the adversity they face.” It also touts her efforts to press “for legislation to advance their efforts for PCOS acknowledgment & education.”

According to the site, Maci has been “nominated” for the following awards: Advocating for Another, Healthcare Collaborator, Lifetime Achievement, Patient Leader Hero, Rookie of the Year and Best in Show for Blog, Community, Facebook, Instagram, and TikTok, respectively.

A day before Maci shared her multiple-nominations, fans were calling the ‘Teen Mom’ out on Instagram, asking that she stop sharing clickbait stories insinuating she is expecting another child, as some women diagnosed with PCOS have difficulty becoming pregnant. 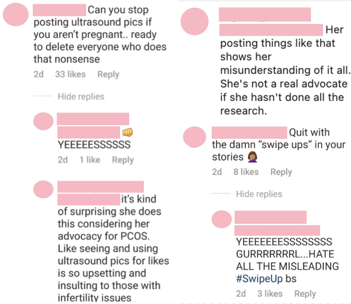 “It’s kind of surprising she does this considering her advocacy for PCOS,” one person commented. “Like seeing and using ultrasound pics for likes is so upsetting and insulting to those with infertility issues.”

“Her posting things like this shows her misunderstanding of it all,” another noted. “She’s not a real advocate if she hasn’t done all the research.”

Maci has become infamous for these click-bait stories, as has her co-star Catelynn Lowell, and Briana DeJesus of Teen Mom 2. In fact, a day after Maci’s received criticism for the insensitive swipe-ups, a pregnancy story about Catelynn expecting twins was reposted to Maci’s Instagram Story. (For the record, Catelynn is currently pregnant with only one child.) 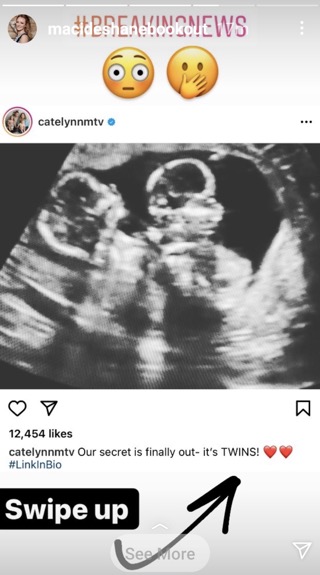 Last year, Mackenzie Edwards, the wife of Maci’s ex Ryan Edwards, slammed Maci and other ‘Teen Mom’ stars for posting these misleading swipe-up stories – specifically those aimed at her and Ryan’s marriage.

As The Ashley previously reported, reality stars pull in a decent paycheck for these  stories, which are not posted by the stars themselves; they simply give the company permission to post on their accounts. (They can, however, reportedly refuse to post certain stories or stories about certain people.)

In March, Maci actually did speak about the possibility of growing her family – her real one, not the clickbait version – revealing that she and husband Taylor McKinney continue to be “on opposites sides of having biological children,” but are still considering adoption.