From getting worried about their spending habits, to getting called out for their past mean comments, the stars of the ‘Teen Mom’ franchise (both past and present) have been keeping themselves busy lately! In an effort to get you up-to-date on the latest Teen Mom OG and Teen Mom 2 news, The Ashley brings you the Teen Mom News Pile.

Devoin Austin (Publicly) Worried That He May Have a Gambling Problem

Devoin can’t seem to get on the right side of his baby mama Briana— or his finances!

The ‘Teen Mom 2’ dad recently wondered publicly if he may be suffering from an addiction to gambling, and even asked his followers for help quelling his need to place bets.

“I got a severe gambling problem and need serious help,” Devoin posted on Instagram Stories around 3 a.m. EST on Monday. “Any recommendations? Please help me.” 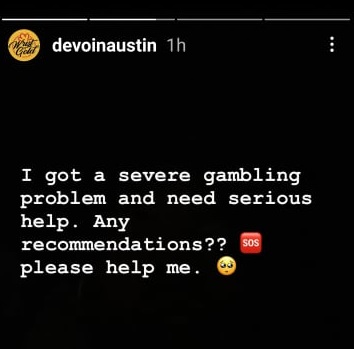 He later clarified that he hasn’t gone to drastic measures to fund his possible addiction, but did state that he’s worried about himself.

“Don’t get me wrong,” he wrote. “I’m not like sellin my s**t to gamble or that f**ked up…but I’m noticing I spend vacations in the casino. And that really bothers me…I just can’t get right.” 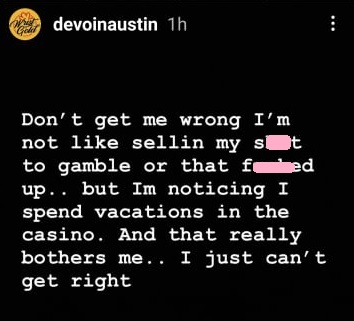 “I spent $700 on some 700 Yeezys…I need a financial advisor,” he wrote on Instagram Stories.

In addition to the $856,800, it was revealed in April that the two owed an additional sum of nearly $7,000 in property taxes for the two Michigan homes they own–- the octagon-shaped home the couple currently reside in, as well as a smaller home in St. Clair, Michigan, where Tyler allowed his sister Amber Baltierra to live (and trash) at one point.

While Cate and Tyler’s clothing business Tierra Reign in currently inactive, the couple have been pulling in paychecks from MTV for more than a decade, while Tyler continues to flip houses and Cate pursues her career in micro-blading.

Cate also infamously earns some coin on social media through the many clickbait stories she allows to be shared on her behalf.

Still, a Michigan clerk confirmed to The Sun that Cate and Ty have yet to pony up the money owed to the IRS.

Nik— the founder of TheDirty.com and the owner of one of the major clickbait companies— recently made some disturbing claims on a podcast regarding Jenelle Evans. Nik appeared on The Skinny Confidental: Him & Her podcast, telling the show’s hosts that, when he and his now ex-wife Shayne Llamas lost a child back in 2014, Jenelle bombarded him with horrible tweets, saying he deserved what was happening to his family.

In 2014, Shayne– who won ‘The Bachelor’ in 2008 and later appeared with Nik on ‘Couples Therapy’– collapsed while 20 weeks pregnant and ended up miscarrying the baby boy she was pregnant with. Shayne spent time in a medically induced coma in the ICU due to massive hemorrhaging during the miscarriage.

Anyway, according to Nik, Jenelle made the incident even harder by sending him mean tweets, allegedly stating that he deserved to have his wife in a coma and child die, due to the website that he ran. (The Ashley can not confirm or deny that Jenelle did, indeed, tweet these things to Nik.)

“It was so intense and so surreal,” Nik said of the tragedy. “And the hate that I was getting was so intense, it was hard…. [on] Twitter…people were just celebrating.

“I remember Jenelle Evans from ‘Teen Mom’ was like, ‘You deserve this, your dead fetus. This is your karma.’ And I was just like, ‘Wow.’ And you start thinking, ‘Is this something that I did? Did I put so much negative energy into the world that it’s coming back like this?'”

Over the years, Jenelle and Nik have had plenty of online beef, and this is not the first time Nik has mentioned Jenelle’s alleged tweets about his dead son. Back in 2019, after it was revealed that Jenelle’s husband David Eason killed Jenelle’s dog, Nik left a comment on an Instagram story about what Jenelle allegedly said to him.

“Jenelle was the one who said she was happy my son died #karma,” he wrote, later adding, “She did apologize to me privately.”

Jenelle has not yet commented on Nik’s claims.

You can listen to the full podcast interview here. (He mentions Jenelle around the one-hour mark, by the way.)

Cheyenne’s sister R Kyle Lynn is firing back at ‘Teen Mom OG’ fans for criticizing her family’s reaction to the news that she was relocating to Washington D.C. to be with Mezie, the father of her son.

R posted a long message to Instagram Stories (that was later shared by the @teenmomshaderoom_ Instagram account). She told her followers that she didn’t watch the most-recent episode of ‘Teen Mom OG,’ and is “clueless as to how they edited it,” but that she doesn’t give “[a f**k].”

Except she definitely does…

R, who is currently expecting her second child with Mezie, confirmed that she is single and did not end up moving to D.C., though her decision to stay in California had “nothing to do with my family.”

“Yes, my family is protective and saw things that I was blind [to] at the moment because my focus was on my child and I honestly didn’t consider myself in the equation,” she continued. “If them caring about the well+being of me and [my son] Baaz is selfish IRL, so be it. We operate outta love, actually like each other, and are tight knit.”

R said she wishes to finish her pregnancy in peace and anyone that tries to go against that will be blocked.

“I don’t know who raised y’all people to be so quick to judge, assume, and think you know it all… some of you were raised by wolves and it really shows,” she added. “Some of y’all are so mean & I haven’t done s**t to you… y’all wild.”