Jersey Shore Family Vacation returns this month for another season of fun, family, feuding, and plenty of fist-pumping along the way.

In the newly released teaser, we get a sneak peek of the Shore squad’s vacation spots for Season 5B, which include El Paso, Texas, where the roommates will break out the western wear and bust a move while line dancing.

The crew will also head to San Diego to watch DJ Pauly D perform for a crowd of fans young enough to be his children.

In addition to watching the cast spin records and sport cowboy hats, viewers will see the dissolution of Angelina Pivarnick’s marriage to husband Chris Larangeira play out this season.

As The Ashley previously reported, Chris– who has appeared alongside Angelina on ‘Jersey Shore Family Vacation’– filed for divorce at the end of January after Angelina allegedly “got close” to Acapulco Shore star Potro Caballero while filming the spinoff All Star Shore in Spain during November and December.

In the Season 5B teaser, a (frighteningly) blond Mike “The Situation” Sorrentino is seen inserting himself in the middle of Angelina’s marriage issues by accusing her of cheating on Chris and having “side pieces.”

In turn, Angelina accuses Mike of “stirring the pot,” while some of the other roommates–- namely Nicole “Snooki” Polizzi and Jenni “JWoww” Farley–- seem perfectly content stirring (and taking shots of) free alcohol. 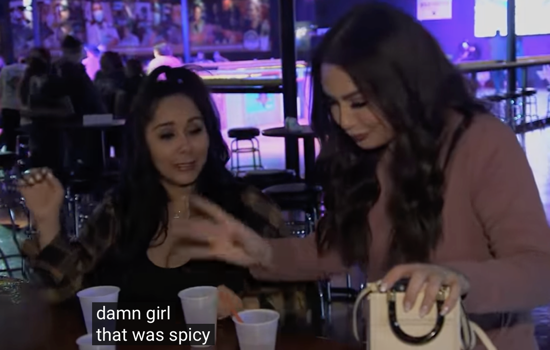 Plenty of screaming and shouting are in store, too, along with a temper tantrum featuring tossed wine, the return of the OG Jersey Shore bunny suit–- dry-cleaned, we hope–- and… whatever the hell is going on in that confessional room.