Nick Cannon’s newest baby mama LaNisha Cole is calling out a couple of Nick’s other baby mamas for allegedly posting “fake IG photo ops” with the Wild ’N Out star.

The former Price is Right model’s comments were made, The Sun reports, after she was asked during an Instagram Q&A about family photos shared by some of Nick’s other baby mamas this holiday season, in which Nick posed alongside his children and Santa.

“It’s not easy but I have to do it for my daughter,” Lanisha wrote. “She is incredibly blessed and is surrounded by so much love – and it’s not fake IG photo op love – it’s a real day in and day out love.”

“There’s no need to mention me or send anything to my dms,” LaNisha seemingly responded to the recent photos by some of Nick’s (many) other baby mamas. “It has nothing to do with me…and no need to be messy…”

LaNisha went on to add, “It’s important for me to keep things positive and maintain my peace in the midst of it all.” 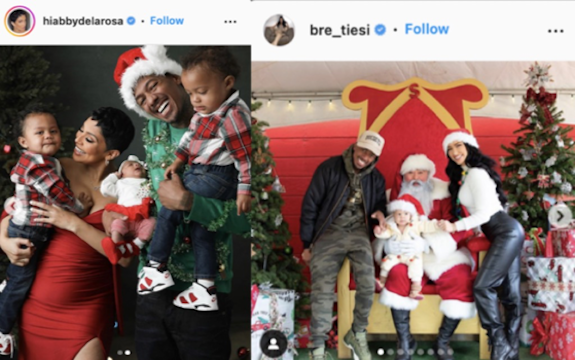 For the record, Nick’s massive (and ever-growing) family also includes son Rise Messiah, who he welcomed in September with Brittany Bell. Brittany is also the mom of two more of Nick’s children– son Golden, born in 2017, and daughter Powerful Queen, born in 2020.

He is also a father to 11-year-old twins Moroccan and Monroe with ex-wife Mariah Carey and is currently expecting his second child with Alyssa Scott. Nick and Alyssa announced their baby news less than a year after the pair’s son, Zen, died from a brain tumor at 5 months old.

While some of Nick’s baby mamas chose to feature the fertile father in their child’s Christmas photos, LaNisha opted for a Nick-free outing to see St. Nick. She later shared some solo shots of baby Onyx sitting on Santa’s lap. 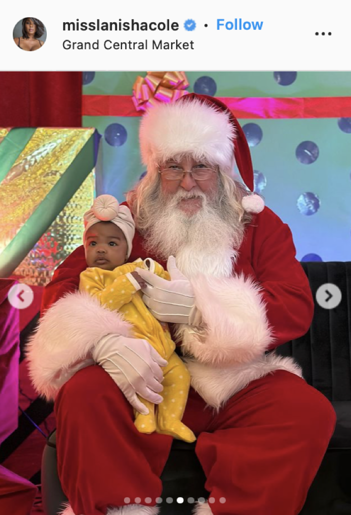 On Wednesday, LaNisha posted a lengthy message to her Instagram Story asking followers to share their “stories of overcoming obstacles and leaving toxic relationships.” She followed up her post with a message to “the people who still feel the need to be nasty” and send her “disrespectful messages.”

” … Yes I’ve made mistakes. Yes I’ve put myself through unnecessary pain and heartbreak (which we’ve all done in the name of love. You have too!) But I’m choosing to do better,” she wrote. “Calling me baby mama #538 every time I say the sky is blue is uncalled for and it’s getting old. My life plays out publicly but there’s a lot you don’t see. There’s always so much more I want to say but this isn’t the time. 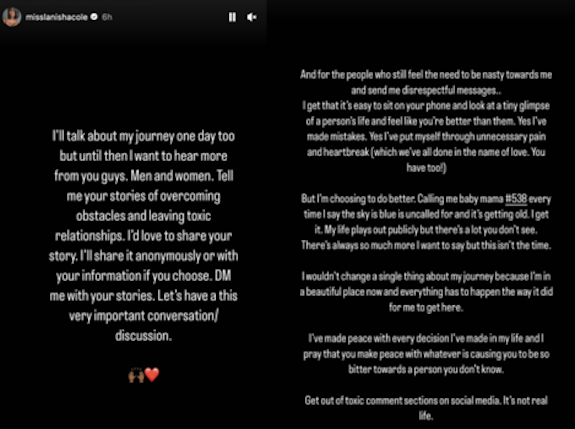 “I wouldn’t change a single thing about my journey because I’m in a beautiful place now and everything has to happen the way it did for me to get here,” she continued. “I’ve made peace with every decision I’ve made in my life and I pray that you make peace with whatever is causing you to be so bitter towards a person you don’t know.

“Get out of toxic comment sections on social media,” she added. “It’s not real life.”

Nick’s baby mama Bre seemingly responded to the criticism about Nick. After she posted the Santa photos, Bre posted a screenshot of a message she received that applauded the fact that Nick “shows up for his kids.”

“THIS! Nick always shows up,” Bre captioned the screenshot, according to Yahoo. “Always present, happy, consistent, loving parent and an even better person! We love u!”

Nick has not yet publicly responded to LaNisha’s comments. However, in a recent interview, Nick admitted that he feels guilty because he can’t spend adequate time with all of his children.

“Being a father of multiple kids, it’s always the biggest guilt on me is that I don’t get to spend enough time with all my children,” he said. “One ’cause I’m constantly working and two because I’m just spread thin.”

RELATED STORY: Nick Cannon Talks Living With Lupus and the Loss of Son Zen on ‘The Checkup with Dr. David Agus’