Stassi Schroeder ended her social media hiatus on Tuesday for a very good reason: to reveal the gender of her unborn child!

The former Vanderpump Rules star— who was fired earlier this month by Bravo over racially insensitive podcast statements and her actions toward former costar Faith Stowers— posted a photo of herself and her fiance Beau Clark holding a pink onesie to her Instagram account, along with the caption, “We’re having a baby girl!”

(Naturally the pink onesie had the phrase, “#OOTD” on it.)

Beau posted a similar (but much more animated) photo to his Instagram, using the caption to state how happy he is to be welcoming a daughter.

“I was raised by great women, and the lessons I learned from them I’ll FW to my daughter and then some! ” he wrote. “She will be great, powerful, humble, kind, loving, compassionate, and a dash from Kesha… ‘She’ll be a motherf*cking WOMAN!!!’ #thankful””

I was raised by great women, and the lessons I learned from them I’ll FW to my daughter and then some! She will be great, powerful, humble, kind, loving, compassionate, and a dash from Kesha… 🎶“She’ll be a motherf*cking WOMAN!!!🎶 #thankful

Beau posted a photo of pair of sunglasses that read, “Team Girl,” with a pink cake behind it, indicating that he and Stassi had some sort of gender reveal party to find out the news. 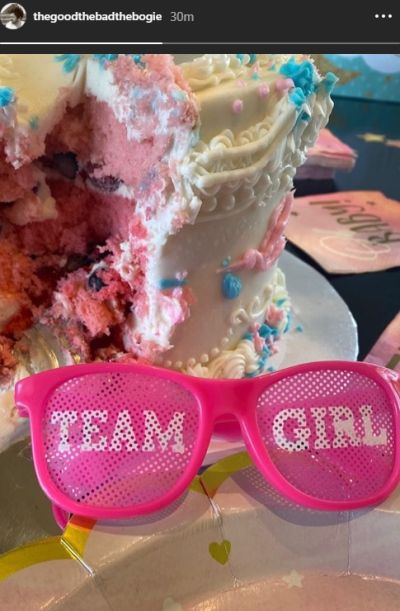 Rumors that Stassi was pregnant began to circulate shortly after her firing, but she confirmed the big news last week via a statement from her new publicist that she is, indeed, expecting.

“Stassi and Beau will be welcoming their first child the first week in January,” the rep stated. “[They are] “grateful and eager to begin the next chapter of their lives as parents.”

After posting their gender announcement, Beau and Stassi got plenty of happy messages from their former Bravo co-stars.

“I am so happy! Love you both,” ‘VP’ star Jax Taylor commented.

“My heart. So happy for you guys,” Amanda Batula of Bravo’s Summer House wrote in the comment section.

In recent years, Stassi has made it no secret that she longed to get pregnant.

“I know I want to be a mom, so I would rather get knocked up before I waited to have a wedding,” she told Us Weekly in July 2019. “It’s powerful to let women know, if that’s something that you want, you don’t have to wait to get married. You’re in charge of your own body and what you want in your life.”

Even after her wedding to Beau was postponed due to the COVID-19 pandemic, Stassi made it clear that she still had baby fever. In late April, Stassi told Us Weekly that she and Beau had “been reckless” when it came to using birth control while under quarantine.

Stassi and Beau have not yet revealed what they plan to name their daughter.

RELATED STORY: Faith Stowers Says She Isn’t Filing a Lawsuit Against Her Former ‘Vanderpump Rules’ Co-Stars Stassi Schroeder & Kristen Doute But Insists She “Would Have Won” If She Had Filed One