Former Vanderpump Rules star Stassi Schroeder is returning the world of podcasting and this time, she’s bringing her husband and daughter along.

On Thursday, Stassi and Beau Clark, who welcomed daughter Hartford Charlie Rose Clark on January 7, announced the launch of their new podcast, The Good The Bad The Baby, now available on Patreon.

The new podcast deal comes nine months after Stassi’s original podcast, Straight Up With Stassi, was dropped and Stassi was fired from ‘VP.’

“NEW PODCAST ALERT! Becoming a parent is literally the best, most f**king overwhelming magical chaotic incredible thing that’s ever happened to me and I am so excited to start sharing the good, the bad, the messy, the little moments, the wtf?! and everything in between,” Stassi wrote on Instagram.

The new mom invited fans to join her family on Patreon, where they will have access to their “exclusive podcast,” as well as exclusive videos and more – “once we figure this shit out,” she added.

For $8.99 per month, Stassi and Beau promise their supporters at least 3 episodes of The Good The Bad The Baby podcast each month, along with videos, photos and updates from the family. 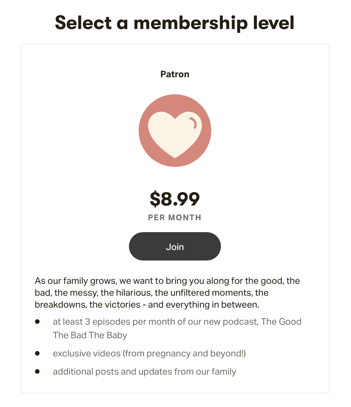 “As our family grows, we want to bring you along for the good, the bad, the hilarious, the messy, the unfiltered moments, the breakdowns, the victories – and everything in between,” the podcast homepage reads. “One thing we have both learned is that sharing our struggles connects us. So we’re giving ourselves (and you) permission to try, fail, succeed and learn – all while reminding each other to not take everything so seriously! And of course we’re documenting the whole way.

“This is an honest, judgement-free zone where we will always share our journey to becoming new parents with you – as always, straight up!”

As fans may recall, Stassi confirmed her pregnancy in June and later that month, announced she and Beau were expecting a baby girl.

The couple’s pregnancy news came just weeks after Stassi was booted from ‘Vanderpump Rules’ along with Kristen Doute after former cast member Faith Stowers spoke about the mistreatment the pair subjected her to during her brief time on the Bravo series – most notably in 2018 when the two reportedly called the police in an attempt to have Faith arrested for crimes she did not commit.

Before Bravo parted ways with Stassi, the former SURver had already begun losing multiple partnership deals and was dropped by her agency, as well as her publicist. Not long after that, her Straight Up With Stassi podcast came to an end as well.

Check out Stassi and Beau’s The Good The Bad The Baby welcome video below.