The former Vanderpump Rules star revealed Wednesday that she and Beau got secretly married last month, on what would’ve been their wedding day, had the COVID-19 pandemic not forced them to postpone their plans.

“Today would’ve been our wedding day. We went and did it anyway,” Stassi wrote on Instagram along with a short clip of herself and Beau dressed casually, standing before an officiant. “I am so proud to be your wife.”

Today would’ve been our wedding day. We went and did it anyway. ❤️ -Married sept 2020 -Hopefully Italian dream wedding oct 2021 I am so proud to be your wife @thegoodthebadthebogie

Stassi noted that she and Beau were married in September (possibly September 21, based on the outfits the two are wearing in the video) and they will “hopefully” have their “Italian dream wedding” in October 2021.

In June, Stassi and Beau announced they were expecting a baby girl, just weeks after Stassi got the boot from Bravo (along with Kristen Doute) for racist actions against her former ‘VPR’ co-star Faith Stowers.

Upon sharing the video of her low-key nuptials, Stassi received some kind words from some of her former co-stars, including Tom Schwartz, who referenced he and wife Katie Maloney also having two weddings. Jax Taylor commented it “was a great day,” seemingly confirming that some of the cast members were in attendance, including Jax’s wife, Brittany Cartwright, who recently revealed she is expecting a baby boy. 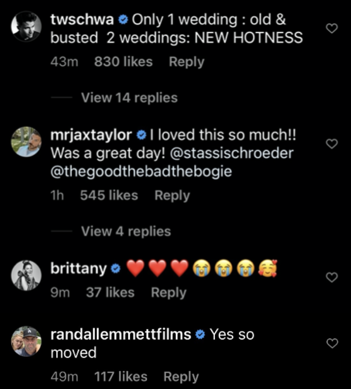 Lala Kent’s fiancé, Randall Emmett, added, “yes so moved.” Lala and Randall, who are expecting a baby girl of their own, also had to postpone their wedding, originally set for April, due to the pandemic. In March, Randall confirmed that plans had changed and he and Lala would instead tie the knot in July 2020, however, that obviously didn’t happen. (They appear to still be unmarried…unless they pulled a “Stassi and Beau” and wed in secret.)

Kristen was also in attendance, and posted about the wedding on Instagram, joking, “I was invited to the wedding after all!” in her photo caption.

I was invited to the wedding after all! #FromDarkToClark

In November at BravoCon, Stassi revealed a few details about her Rome wedding, confirming it would be kid-free and full of booze.

“[There will be] no kids at our wedding,” she said. “This is an adult party. I want everyone to get hammered and enjoy themselves.”

Now that she’s got a baby on the way, though, her feelings on kids at the wedding may have changed.