The next generation of Vanderpump Rules stars just keeps getting bigger!

Just weeks after Stassi Schroeder and Lala Kent announced that they are pregnant, Jax Taylor and Brittany Cartwright have revealed that they, too, are expecting their first child.

The couple— who got hitched in Kentucky last year— announced their big baby news on social media on Monday.

“Sooooo,……..I am gonna be Dad..” Jax wrote in the caption of a photo of him and Brittany holding up sonogram photos.

“Mom & Dad,” Brittany captioned the same photos. “The love of our lives is coming soon.”

Brittany and Jax received plenty of congratulatory messages from their ‘Vanderpump Rules’ pals.

“Yesssss. Finally,” Stassi’s fiance, Beau Clark wrote in the comment section of Jax’s post. “Holding in this secret has been hard!!!! Let’s start a dad club with [Lala’s fiance] @randallemmettfilms”

“Love you guys so so so much,” Stassi wrote.

“I am so happyyy!” Kristen Doute commented.

“Now I look back and my dad worked his ass off literally to give me everything I ever wanted,” Jax told E! Online. “I want to be that person. I want to be that dad. I never want to say no. My parents were just such good parents. My father was an amazing man and I just hope I can do it justice.” 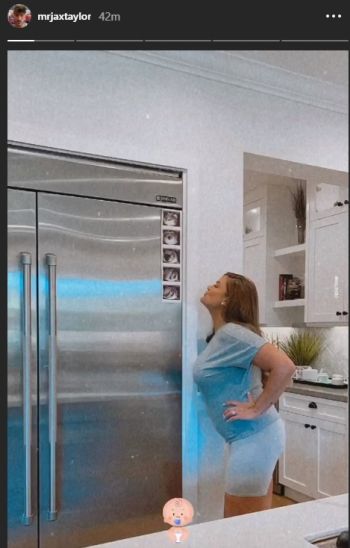 In April 2019, Jax said he was ready to put his party boy days behind him and focus on being a dad.

“My whole life has been a party, so I’ve done everything I wanted to do,” he told Us Weekly at the time. “I’m ready for the next step. I’m ready to have kids. I’m ready to be part of the PTA, soccer dad, soccer mom, gymnastics coach, whatever. That’s my next job.”

He added that he wants two kids, while Brittany is hoping to have three.

“Whatever God gives me, [I’ll be] OK with,” Jax told the magazine.

Jax and Brittany have not yet revealed their baby’s due date, or if they’re having a boy or a girl. As The Ashley previously reported, Stassi and Beau are expecting a baby girl, and Lala and Randall recently announced that they, too, will be welcoming a daughter.