From handling multiple court dates to handling your own body parts to make some quick cash, the stars of the ‘Teen Mom’ franchise (both past and present) have been keeping themselves busy lately!

In an effort to get you up-to-date on the latest ‘Teen Mom OG’, ‘Teen Mom 2’ and Teen Mom: Young and Pregnant news, The Ashley brings you the Teen Mom News Pile. Here are some of the major (and minor but interesting) ‘Teen Mom’-related things that have happened over the last week or so…

David Eason has two court dates in one week: Here’s what happened

Mr. Jenelle Evans had quite the busy schedule this week, what with  two court hearings held back-to-back. As The Ashley previously reported, David was due in a New Hanover, North Carolina, courtroom on Tuesday to answer to a misdemeanor charge of Injury to Personal Property and one charge of Tampering with a Vehicle. (Those charges stem from an incident that occurred in 2018 in which David “self-towed” a stranger’s truck that he felt had parked too close to his boat.)

The Ashley was able to obtain an update on that case. According to a New Hanover County Clerk of the Court, David hired an attorney to represent him in this case, and that attorney appeared on his behalf on Tuesday. The case was (was again!) continued until August 31.

On Wednesday, David had a court date in nearby Columbus County, North Carolina. That hearing was to face two charges— one misdemeanor count of Communicating Threats and one misdemeanor count of Assault With a Deadly Weapon— stemming from when he allegedly pistol-whipped and threatened the life of James Spivey, a former friend of Jenelle’s. David later filed charges on James, claiming that James hit him with a railroad spike coat rack (as you do). James was charged with Assault with a Deadly Weapon and had his court date on Wednesday as well.

A Columbus County Clerk of the Court tells The Ashley that David has hired attorney William Gore to present him in this case. (This is the same attorney that represented David during his 2019 court battle to win back custody of his kids.)

“That case was continued until September 10,” the Clerk told The Ashley, adding that the continuation was agreed upon jointly by the court and David’s attorney. David’s attorney appeared on his behalf.

The Clerk also confirmed that James’ case was also continued today until September 10.

So…for those of you keeping track at home, David now has one court date a month for the next three months. He will face the towing charge in August, the assault/communicating threat charges in September, and then appear on October 30 in New Hanover County court to face a charge of speeding and driving on a revoked license.

The Ashley will update this when more info is available.

Malorie Beaver has followed in the footsteps of fellow ‘Teen Mom: Young and Pregnant’ stars Kiaya Elliott and Kayla Sessler by launching her own OnlyFans account.

The 20 year-old has taken to Snapchat to promote her new money-making venture, as well as Instagram.

“Your girl made an OnlyFans,” Malorie shared on Instagram along with a SFW selfie. “Stay tuned.” 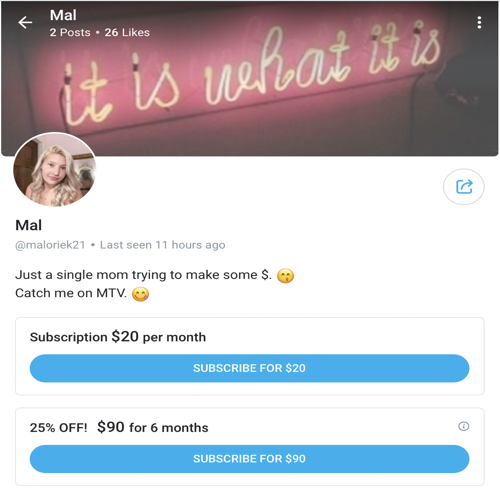 At the moment, Malorie’s sister, Rachel, and their mom, Stephanie, have yet to jump onboard the OnlyFans trend.

Briana DeJesus continues to blow us away with her out of this world baby names.

‘Teen Mom 2’ star Briana DeJesus took to Twitter this week to share some baby boy names she’s considering. If you’re wondering, Briana isn’t pregnant with baby number three at the moment; however, she’s proposed a solution to that. (And no, it doesn’t involve her getting knocked up in da club…this time.)

“I want to have a boy so I can name him Astro Cloud or Soren Ray … who wants to go half n half on IVF,” Briana tweeted. “Also nobody from the teen mom franchise better steal my name caus will be heated lmao.”

As fans of ‘Teen Mom 2’ know, Briana is already a mom to daughters Nova Star and Stella Star…and fans probably also know that both of those names essentially translate to “Star Star.”

Briana has since deleted the tweets, and did not indicate when we can expect Baby Astro Cloud to burst through her loins…

To catch up on more of the latest ‘Teen Mom’ stories, click here!