Jenelle Evans is lashing out (again) at one of her former Teen Mom 2 co-stars.

On Monday and Tuesday, Jenelle took swipes at Chelsea Houska via social media, accusing the mom of four of trying to make her relationship with husband Cole DeBoer look “perfect” online. She also told her followers on TikTok that Chelsea— who left the show in 2020—  had “personally been a complete bitch to me for years.”

This rant comes weeks after Jenelle ranted that Chelsea and the other original ‘Teen Mom 2’ stars– Kail Lowry and Leah Messer— ignored her at Reunions. She also insinuated Chelsea did questionable things behind “closed doors” at the Reunions that were not discussed on the show.

Although Chelsea has yet to publicly respond to Jenelle’s many rantings about her, a source tells The Ashley that Chelsea is definitely aware of what Jenelle has said about her.

“There is nothing to expose,” a source close to Chelsea tells The Ashley. “Jenelle wants people to believe she knows all these deep, dark secrets about Chelsea but it’s simply not true. Jenelle barely knows Chelsea. They saw each other a few times a year for a few hours, if that. Especially in the later years [of the show], Jenelle was off being involved in whatever drama she was causing.

“She knows nothing about Chelsea’s personal life or Chelsea’s relationship with Cole,” the source added.

Jenelle’s first rant came Monday when she reposted a fan page’s meme that shows a scene from an early episode of ‘Teen Mom 2’ in which a young Chelsea talks about wanting a “happily ever after.” Below those screenshots, the fan page placed a recent photo of Chelsea and Cole and their four children. 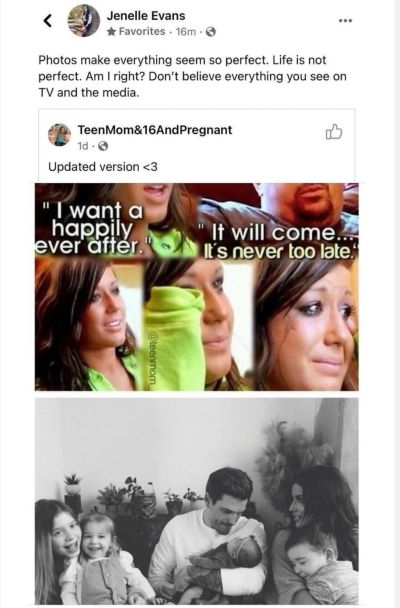 “Photos make everything seems so perfect,” Jenelle wrote. “Life is not perfect. Am I right? Don’t believe everything you see on TV and the media.”

When followers called Jenelle out on TikTok for attacking Chelsea, she denied that she was talking about someone in particular.

Jenelle eventually deleted the post, writing instead, “Lmfao no one’s perfect and life isn’t perfect. Sorry to inform everyone the truth. I know it hurts.”

Still, Jenelle continued to be called out on social media for her unprovoked attack on Chelsea.

“Who exactly am I tearing down when it was facts and no name calling?” Jenelle wrote to critics on TikTok. She then asked a very Farrah-Speak-ish question.

“What was so offensive I said?”

“Again back to my point – life isn’t perfect and no one should act like their s**t don’t stink…Yeah every typical ‘picture perfect family’ on IG isn’t 100 percent flawless…Not talking about one individual but more like a stereotype and group of people,” Jenelle insisted.

“Yeah it sucks some people try to act like their lives are picture perfect and scared to put down their pride to make their loves relatable and admit their flaws,” Jenelle said. “Some girls act like they’re a Stepford wife.

“And yes I will hold a grudge and always make it known.”

She then stated that Chelsea was “a complete bitch” to her.

“If you have personally been a complete bitch to me for years and can’t simply be nice then no, I will never like you as a person.”

“How was Chelsea? Chelsea was just very quiet, she stayed in her room a lot during the Reunion,” she said. “But ya know, when s**t was poppin’ down, she’d peek out her head and see what was going on and she wasn’t like stuck up, but she just was very like, to herself I guess you could say.”

“Let’s just say Chelsea and Kail had their own clique and that was very important to them,” she continued. “So every time we went to Reunions or anything, it was no talking to Jenelle, no association and I would be there alone on my phone just pretending like time was passing by.”

Two months ago, Jenelle told This Family Tree podcast (in a now-deleted episode) that she feels ‘Teen Mom 2’ producers portrayed Chelsea “as the Golden One” and insinuated that it was the show’s editing that made Chelsea look good and Jenelle look bad.

“Like, I knew some things she would do behind closed doors when we would go to the Reunion shows but that was never brought up,” she said on the podcast. “I’m not trying to rat her out, or even say the things she did but I’m just saying she’s not a goodie-two-shoes. It makes me upset that they wouldn’t show her raw footage but they made me out to be like a villain.”

Chelsea has never responded to any of Jenelle’s rants about her, but the source close to Chelsea tells The Ashley that the former ‘Teen Mom 2’ star (and those around her), are not bothered by Jenelle’s attempts to “expose” Chelsea.

“Chelsea and Jenelle have not seen each other or spoken in literally years,” the source continued. “For Jenelle to insinuate that she knows the ‘real’ Chelsea, or anything about how she is today, is ridiculous. Even during the early years of the show, they spent minimal time together. It’s laughable that Jenelle keeps trying to make it seem like Chelsea has this deep, dark past.

“At this point, Chelsea just thinks it’s creepy that Jenelle is constantly talking about her, even though they haven’t been around each other in years, and Chelsea has never responded to anything Jenelle has said about her. Chelsea knows Jenelle lives for the drama and wants her to fight back. Chelsea doesn’t care enough.”