The OGs of The Challenge are back and more competitive than ever.

What started as an online campaign last summer headed up by ‘The Challenge’ vet Mark Long to bring some of the OG competitors together for a special season of the competition show began filming earlier this year and now, viewers are getting a first look at The Challenge: All Stars, streaming next month on Paramount+.

‘The Challenge: All Stars’ will feature 22 OG competitors who will be competing for $500,000 and some major bragging rights. Joining the vets will be another familiar face: ‘Challenge’ host TJ Lavin.

While the ‘All Stars’ season is unlike any other, viewers can still expect the same over-the-top challenges – this time, set in the Andes Mountains of Argentina, according to MTV.

Here’s a look at ‘The Challenge: All Stars’ lineup, along with each competitor’s original show: 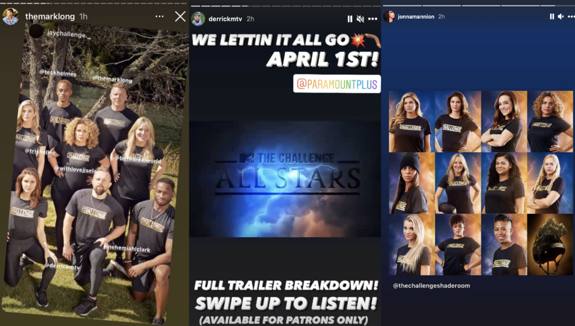 While fans of ‘The Challenge’ have been able to see OGs like Darrell and Aneesa compete on The Challenge: Double Agents this year, ’All Stars’ Arissa, Jisela, Kendal, Teck, Larerrian and Yes have been out of ‘The Challenge’ game since the early 2000s. It’s been about a decade since OGs Katie, Ace, Alton, Nehemiah, Trishelle, Beth, Mark, Syrus, Ruthie and Big Easy threw on matching athletic wear to throw down against their fellow ‘Challenge’ competitors.

Jemmye, whose most recent ‘Challenge’ appearance was on 2018’s Final Reckoning, shared her excitement about the show, revealing she hadn’t intended to return for another season of ‘The Challenge,’ but after getting the call for ‘All Stars,’ she had to “come back for one last dance.”

“It was a complete honor to play the game with so many legends,” she wrote on Instagram. “This was truly the most fun challenge experience I’ve ever had. OGs over everybody babyyy.”

Jemmye also gave Mark – aka ‘The Challenge’ Godfather – a shoutout in her post.

“Stepping onto the bus that day & watching your dream become a reality was one of the dopest things I’ve ever been a part of,” she added. “What a beautiful ride with the most beautiful people.” 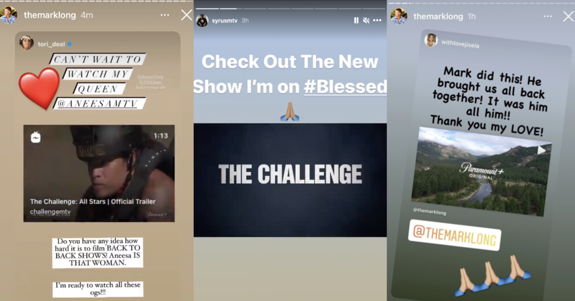 Jonna, who fans last saw in 2016 on Battle of the Exes II, shared on social media that she “almost fell out of [her] chair” when she got the call to be on ‘All Stars.’ Jonna said her husband was the one who encouraged her to do the show and revealed she had welcomed her second child just seven months earlier.

‘The Challenge: All Stars’ begins streaming April 1 on Paramount+.

Check out the first trailer below!