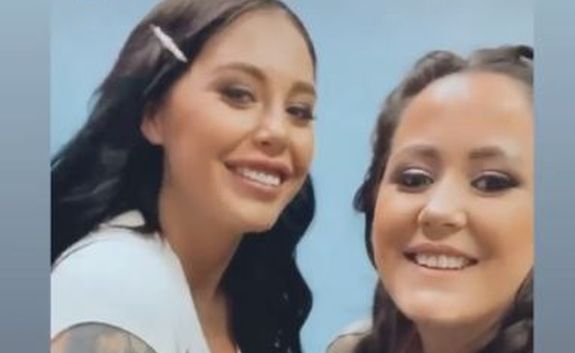 Deavan Clegg is shooting down Jenelle Evans‘ recent claims that Jenelle was her producer on the ill-fated Girl S**t project— and revealing how she helped get the former Teen Mom 2 star booted from the group project after finding out about Jenelle’s unsavory past!

Deavan, Jenelle and about 16 other girls were announced as part of the Girl S**t podcast/lifestyle brand earlier this week. In an interview with The Sun, Deavan said she initially knew nothing of Jenelle and her husband David Eason‘s pasts but, as soon as she found out the Easons had been accused of child and animal abuse, as well as other unsavory actions, she went straight to management and demanded Jenelle be booted.

“I told the owner I would not be involved in a project that is working with someone with these allegations. It’s everything I’m against,” Deavan said.

On Instagram, Deavan further explained why she agreed to work with Jenelle in the first place, stating that she was “an idiot” who did not look into Jenelle’s backstory before starting on the project with her.

Some of the Easons’ past actions— such as David shooting and killing Jenelle’s dog Nugget in 2019, and the 2019 CPS court case that temporarily caused them to lose custody of their children— have been brought up by some of the other Girl S**t girls on social media. Deavan told her followers she “saw the videos” and was very upset.

“I’m truly sadden[ed] and disgusted and do not support what they have done in the past,” she wrote. “And I honest to God don’t know anything about ‘Teen Mom’ girls’ drama. I don’t keep up. And I am sadden and dishearten by it. But it is being handled.” 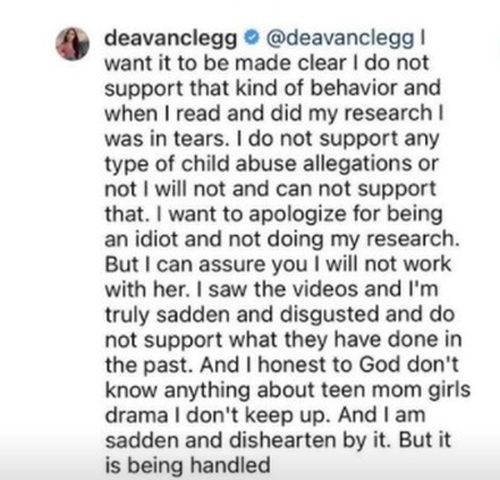 “I understand and I read the CPS report and I was in tears, she later wrote. “I don’t support it.”

As The Ashley previously reported, Jenelle was booted from the Girl S**t cast less than a day after she excitedly announced the project on social media. She was also denied admission into the launch party after she chose to show up (with the ever-present David in tow), despite being told not to go. She later stated on Instagram that she was the victim of “cancel culture.”

She also told her followers that she “can’t be fired” because she is a producer of Girl S**t.

Deavan stated that Jenelle is just a cast member, and is not anyone’s producer, despite what Jenelle stated on Instagram the morning after her bowling alley VIP room snub.

“So there’s a lot of rumors I woke up to saying that Deavan got me fired from this thing, when I’m her producer,” Jenelle said on Instagram Stories on Thursday. “I actually hand-chose Deavan to join the cast. With that being said, I am not fired. We don’t know what’s going to be happening with the podcast right now..”

In her interview with The Sun, Deavan fired back against Jenelle’s claims.

“That’s not true… She was never a producer when I signed on. She said she knew someone working on a big project and said ‘Jump on a Zoom call if you want to be involved.’

Jenelle has yet to publicly respond to Deavan’s comments.

As for Girl S**t, it appears that all the drama surrounding Jenelle’s firing has caused a delay in the launch. The podcast’s launch date— April 1— came and went, and all of the posts on the official Instagram have been removed. The page’s bio now reads, “Guess y’all want the 411 huh?… As if! Brb, dealing with some girl s**t.”

RELATED STORY: Jenelle Evans Says It’s Unfair That People Are Still Holding a Grudge Against Her & David Eason For Dog Killing Incident “That Happened Years Ago”