Todd Chrisley did not hold back during the latest episode of his Chrisley Confessions podcast, spilling tea on his pending lawsuits, his feud with daughter Lindsie, and more!

One of the biggest reveals from the podcast episode— which was released last Wednesday— is that, according to Todd, Lindsie did not leave the family’s show Chrisley Knows Best willingly, as she has always stated. Instead, Todd claimed that the network booted Lindsie from the show after she got into an altercation with her stepmom, Julie Chrisley!

As The Ashley has previously reported, Lindsie and the Chrisley Family have been at odds for years— with Todd claiming Lindsie was instrumental in starting the Georgia Department of Revenue’s investigation against Todd and Julie. (The couple was indicted back in 2019 on charges of wire fraud, conspiracy to commit bank fraud and conspiracy to defraud the United States.)

Lindsie has always denied any involvement, but during the podcast episode Todd claims he has proof that Lindsie convinced her brother Kyle and his then-wife Lexi to help the investigators build a case against the Chrisleys.

Todd claims Kyle and Lexi did so in hopes of winning back rights to their daughter Chloe, but says Lindsie’s alleged motives were simply bitterness over being cut from the TV show.

“I’ve kept it a secret since it happened in 2017, but I’m not going to let someone else’s lies make me sit on the truth,” Todd added. “I’ve done it long enough.”

During an appearance on The Dr. Phil Show in 2019, Lindsie admitted that there was an altercation between her and Julie, although she did not go into detail about what happened. She has stated during her appearance and in later interviews that being around the Chrisleys was “volatile” and that she chose to leave the show.

“I just felt like [leaving the show] was the best thing for my family and for my well-being,” Lindsie has said.

Todd told his listeners that he was ready to release what he says is the truth about Lindsie leaving ‘Chrisley Knows Best’ back in 2017.

“Lindsie stated that she left the show because it was a toxic work environment for [her son] Jackson,” Todd said. “No one knows this but now I’m able to say it. Lindsie did not quit the show.

“Lindsie’s [show] contract was not renewed and I had fought for two seasons to keep Lindsie on the show because the former executive with [the show’s production company] Maverick did not see the need to have Lindsie on the show if Lindsie was not going to allow them into her home or allow them to document the day-to-day of her marriage and her child and what was going on with her life.”

Todd claims that the producers wanted to reduce Lindsie’s role on the show but he refused to allow it.

Todd then brings up Julie (who, by this time, has literally not said a word on this episode for at least 20 minutes.)

“There was a situation between you, and Lindsie,” Todd says, prefacing the story by letting listeners know that he has affidavits from 24 people who were in the home when the “situation” allegedly occurred.

“Lindsie was there in the house, and Lindsie had a social media post that she needed to get posted. [My granddaughter] Chloe had already been put down to bed by her nanny, who has given an affidavit to this,” Todd began, adding that he plans to use the witnesses’ affidavits in the deposition for the case.

“These affidavits clearly state what happened in our home. Lindsie went upstairs, got Chloe out of bed, had the makeup artist start helping to get her dressed and to fix [Chloe’s] hair so [Lindsie] could take a picture with Chloe for her social media post.

Julie stated that, when Lindsie got her out of bed, Chloe had already undergone her pre-bedtime hair ritual that includes 25 minutes of moisturizing, twisting and placing her hair in a silk cap.

“I’m out in the garage and Julie comes to me and says, ‘I’m so frustrated…Chloe is out of bed because I guess Lindsie needs to take a picture for social media.'” Todd said.

“Lindsie comes down the stairs with her bag and says, ‘I’m so f**king done with this. I will never do anything for this family again! I’m done with it!'” Todd says, adding that Lindsie then told him, “You better get your bitch on a leash!”

“[She] was standing there talking about Julie,” Todd said.

Todd said that Julie then asked Lindsie why she would get Chloe out of bed.

“Folks, this is in all of these affidavits of everyone that heard it. Lindsie’s the only one who has a different story to tell, and Lindsie’s never told this story. Lindsie’s only touched on it and said she left the show…if you go back, Lindsie states that there was an altercation between she and Julie.

“I then looked at Julie and said, ‘If you let her cuss you like this in your face in your home and you don’t even mop the floor with her ass, that’s on you!” Todd said.

(It can be assumed that the episode Todd is taking about is the one that contains the scene posted below.)

“So Lindsie never felt threatened, or [a] hostile work environment or any of that, because she showed up to work the next day to film that scene, then she left to go back to Atlanta,” Todd said.

Later, Todd said he found out that Lindsie had hired an attorney who was demanding Lindsie be paid and let out of her show contract so she was free to work with other networks.”

(Lindsie hosts the Coffee Convos podcast with Teen Mom 2 star Kail Lowry and has been featured on the show several times over the years, but only as a guest star.)

“Everyone’s story was consistent, that Julie was not to blame and that Lindsie was the aggressor. That’s what these statements say,” he said. “…I don’t have to lie on my daughter. She’s my daughter and I love her, and I would like nothing better than for Lindsie to accept responsibility for the things she’s done, apologize for it.

“If Chase has said things about Lindsie that he shouldn’t have said, which he has, he needs to apologize and the family needs to move forward. But you can’t move forward when there’s a narrative of a lie that’s being told. Everything I’m telling you today is backed up with documents, and I will release those documents if I need to.”

Todd said an investigation was done, but the production company found that there was no ‘hostile work environment’ as Lindsie claimed.

“Lindsie was the aggressor and that everything that happened, Lindsie provoked and jumped on Julie,” he said. “Therefore, the network decided to not bring Lindsie back. Now, keep in mind, her contract was still in place. She fought to try to get out of her contract so she could go and do other things. And the network would never release her from her contract, nor would they bring her back to the show.”

Todd claims that Lindsie was mad that she was kicked off the show, so she enlisted her brother Kyle and his wife to help take down Todd and Julie. She used the idea of them getting custody of their daughter Chloe to entice them, according to Todd.

“We now know that Lindsie went to Kyle and said, ‘If you want to get custody of Chloe back, I can help you, and here’s how we’ll do it.'”

Todd said Lindsie’s plan was to cause him and Julie— who currently have full custody of Chloe—to go to jail so that no one would be there to take care of Chloe, so she would go back with Kyle, her biological father.

“The mother’s rights had already been terminated but Kyle’s rights had not. Their goal was to strip Chloe out of this home and give her back to Kyle…” Todd said.

After the podcast was released, Lindsie took to Instagram Stories to respond to some of the things Todd claimed in the episode.  While Lindsie didn’t respond specifically to Todd’s claims about why she’s no longer on ‘Chrisley Knows Best,’ she did state that she is tired of her family talking about her.

“If I’ve done something wrong, I will take accountability for anything that I have done, but what I will no longer do is sit by silently while someone continues to smear me for their personal benefit,” she continued. “I have been bullied online via Instagram, Twitter and [have] constantly [been] a topic of conversation on [Todd’s] podcast.” 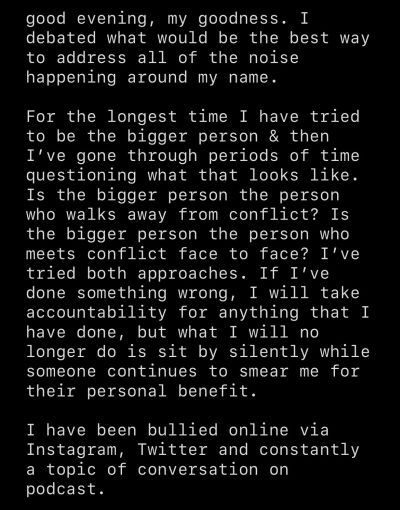 The Ashley has reached out to a rep for Lindsie to see if she has any comment on Todd’s claims.

RELATED STORY: Lindsie Chrisley Reacts to Comments Made About Her Divorce By Estranged Father Todd & Brother Chase: “I Truly Was Shocked”