Todd Chrisley is thanking those who stood with his family through their tax evasion case after an investigation revealed the Chrisley Knows Best star was “unfairly targeted.”

According to E! News, last week’s conclusion of an investigation by Atlanta’s Office of the Inspector General (OIG) found that the Georgia Department of Revenue (DOR) misused funds seized in asset forfeiture. The investigation was reportedly launched after Todd and wife Julie Chrisley‘s attorney tipped off the OIG about apparent misconduct.

Todd and Julie were previously accused of evading nearly $2 million in state taxes from 2008 to 2016; In October 2019, the DOR claimed the couple had actually overpaid some years and owed less than $77,000 for just one year of incorrect filing.

The investigation reportedly revealed photos of Joshua Waites, the former director of the DOR’s Office of Special Investigations, striking a pose on furniture seized from Todd and Julie and bragging about the seized items in messages. (Todd posted screenshots last week on social media of court docs detailing this incident.)

In addition to naming Todd’s son Kyle–- but not Todd’s estranged daughter, Lindsie, as Kyle previously claimed–- as the individual who helped authorities build a tax fraud case against the reality TV couple, the documents also revealed that Joshua’s office filed an improper request with the U.S. Treasury Department to access the Chrisleys’ bank accounts.

“By posing on the Chrisley’s furniture, Director Waites and other senior DOR leadership undermined DOR’s ability to maintain a position of impartiality in the enforcement of state laws,” the OIG report stated.

It went on to claim the actions “leads credence to Todd Chrisley’s complaints that he was unfairly targeted for investigation due to his ‘celebrity status.’”

“So blessed and grateful for all of those that knew the truth and stood with us side by side to reveal it, so much more is still to come about how this entire tax situation came about and how all parties were seeking recognition based on lies, criminal conduct, and trying to advance their careers,” Todd wrote. “We stand steadfast in our faith and look forward to every dirty deed being exposed with more truth than anyone could ever imagine, stay tuned.”

Todd’s post garnered many positive comments from his supporters and friends, including fellow (former) reality TV star Abby Lee Miller of Dance Moms fame, who took the opportunity to mention her own legal plight. 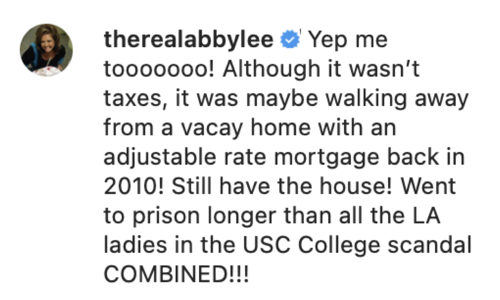 “Yep me tooooooo!” Abby wrote. “Although it wasn’t taxes, it was maybe walking away from a vacay home with an adjustable rate mortgage back in 2010! Still have the house! Went to prison longer than all the LA ladies in the USC College scandal COMBINED!!!”

(Abby was, of course, referring to the 366-day federal prison sentence she was handed in May 2017 for charges of bankruptcy fraud.)

In response to the findings of the OIG investigation, Todd and Julie’s attorney, Christopher S. Anulewicz, released a statement on the family’s behalf.

“The Chrisleys are grateful for the OIG’s efforts, as everyone in Georgia should be,” the statement read. “The OIG’s efforts brought to light what is called ‘an unpleasant chapter of DOR’s history,’ and its efforts can allow DOR to positively move forward.

“Unfortunately, the Chrisleys are still dealing with the fallout of this unpleasant chapter,” the statement continued. “As a result of the combined efforts of the OIG and the Chrisleys, the truth is now revealed.”

As The Ashley previously reported, the DOR cleared Todd and Julie of their tax evasion charge in 2019, though the two remain under indictment by a federal grand jury on charges including tax evasion, conspiracy to commit bank fraud, wire fraud conspiracy and aiding the filing of false tax returns– allegations which Todd’s attorney has denied.

RELATED STORY: Lindsie Chrisley Tells Her Estranged Father Todd Chrisley to Just Leave Her Alone: “There Will Never Be a Reconciliation!”